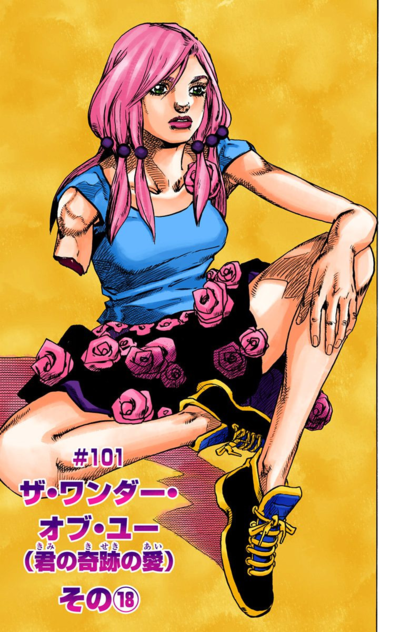 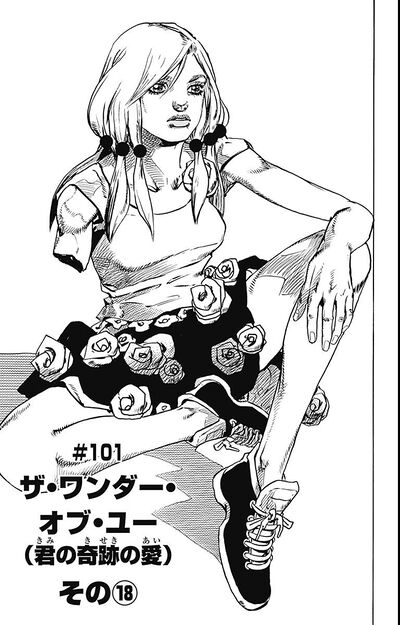 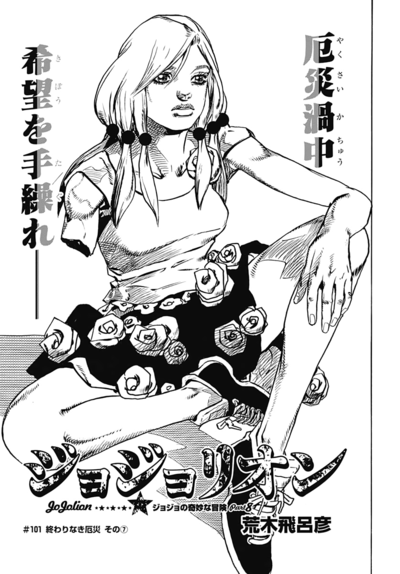 Toru is biding his time in the thicket on the side of the Higashikata Estate. Spotting a hornet's nest, he extends his arm towards it and traps two hornets by turning his hand into stone as they sting him, and then he eats them. Observing Josuke Higashikata and Rai Mamezuku who are still in the secret laboratory at the TG University Hospital, Toru is surprised to see that one of Soft & Wet's bubbles had passed through Mamezuku's clothing and bored a hole in his chest. Toru notes the existence of these invisible bubbles and wonders if it is an ability that Josuke himself was not aware of. However, Toru remains unfazed, reassuring himself that Josuke is still inside the calamity, also noting that Mamezuku has self-destructed.

Yasuho initially refuses the offer as she believes that the fruits are not ripe yet, but Joshu rebuts that the bigger fruit looks ripe. Joshu mentions how Yoshikage Kira used the fruit to turn into Josuke and survived. He hopes that he can save Yasuho and by extension his family with the Locacaca. Suddenly, Joshu and Yasuho hear a rustling noise in the thicket nearby. Joshu dismisses it as the wind, but Yasuho correctly suspects that the enemy Stand user must be nearby. Hidden among the trees, Toru weighs his options and decides that he can allow Yasuho to eat the fruit as a test. Furthermore, she is still inside the range of Wonder of U and of no danger to him.

Yasuho decides to make an equivalent exchange and explains to Joshu that the process needs two people to exchange injuries. Joshu immediately accepts as he wants to protect Yasuho and isn't scared anymore. He proceeds to fantasize about how their exchange will create a supremely intimate bond between them and pushes himself onto Yasuho, using the need for physical contact as a pretext. Yasuho is dismayed that Joshu lost his mind. Toru decides to make a small noise to alert them of his presence. It confirms Yasuho's suspicions and she then pieces together that the Stand user was here all along, watching her. She realizes that Toru is the enemy. She takes the fruit and eats it, triggering the equivalent exchange. Yasuho and Joshu's legs merge temporarily. Through this contact, Yasuho is able to exchange her wound and her arm regrows. However, Joshu is shocked to see his right arm shrink into a stub and panics as he hasn't realized what he would have to sacrifice. Determined, Yasuho summons Paisley Park and prepares to confront Toru.