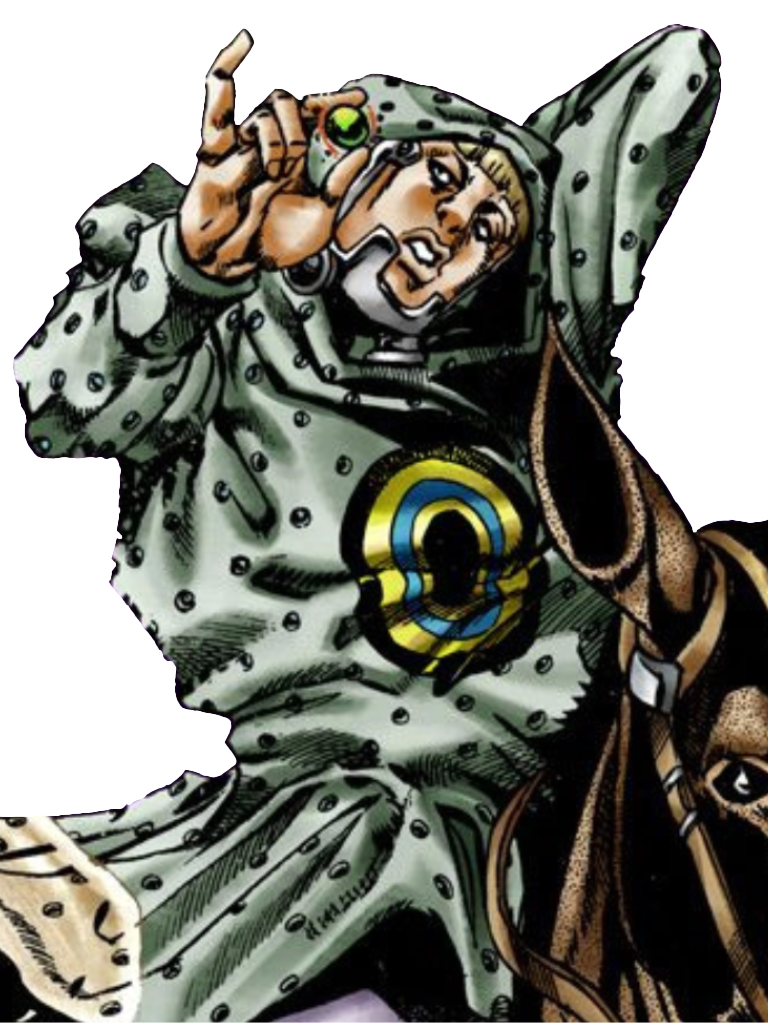 Eyes of Heaven (NPC)
“
Don't let up 'til the very end. And watch out for useless resistance right before they die!
”
—Benjamin Boomboom, SBR Chapter 19: The Devil's Palm, Part 2

He is the patriarch of the Boomboom Family and father of L.A. and Andre. Benjamin Boomboom is one of the racers of the Steel Ball Run and attacks Johnny Joestar and Gyro Zeppeli to eliminate competitors.

Benjamin is a Stand User who uses Tomb of the Boom 1 to assassinate competitors.

Benjamin appears like a big middle-aged man in his late forties. His most peculiar feature is the metallic apparatus covering the bottom of his face, which he can sink inside his face to change facial features. He wears a dotted cowled, hooded cloak and an iron mask that covers his jaw.

The series is known for alternating colors between media, the information presented below may or may not be canon.
Skin(Fair)
Hair(Blond)
Eyes(Black)
Apparatus(Silver)
Outfit
(Blue-gray cloak with blue polka dots and a yellow, blue, and black target, lavender pants with green rings.) 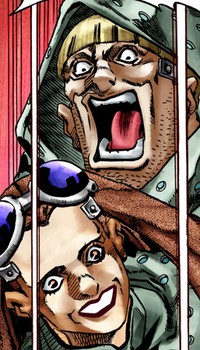 Benjamin gloats when his foes are at a disadvantage

Benjamin is a murderous and greedy man, who targets other competitors in the Steel Ball Run to get ahead and obtain the prize money.

Benjamin is very aggressive, constantly shouting at his sons (especially L.A.) and badmouthing his wife. Although he protects his sons using his Stand as a shield, he pays no mind to the agonizing Andre and leaves him alone. He seems to hate the mother of his children, who supposedly abandoned the family to "be a whore".

Main article: Tomb of the Boom 1

Tomb of the Boom 1 2 3 grants every member of the Boomboom family the ability to manipulate iron in different ways. Benjamin manipulates pieces of iron by putting them under his skin, allowing him to change the appearance and hide weapons.

Not much is known about Benjamin Boomboom's life before the Steel ball Run. Benjamin mentions that one time, when he was young, he fell off a cliff and tore off his lower jaw and then walked 5 kilometers back home.[3] He also mentions that his wife left his family's home and became a whore.[4]

One day, Benjamin and his two sons went looking for mines in the cursed mountains in the desert despised by the local Indians. They stumbled on a Devil's Palm and collectively acquired their Tomb of the Boom 1 2 3.[3]

The Boomboom Family participates in the Steel Ball Run, aiming to be at the first, second and third place to maximize their gains. Lost in the mass of the racers during the first stage, the Boomboom Family assassinates three other competitors named Max Becker, David Hagen and Paul Lukather by using Tomb of the Boom 1 2 3 to magnetize them and make them collide.

During the second stage, the Boomboom Family follows Johnny Joestar and Gyro Zeppeli in the desert because of Oyecomova, who has put a bounty on Gyro. Andre is sent to trick them using the pretense of having been bitten by a poisonous lizard and soon enough Gyro kicks Andre's knife aside, magnetizing his leg. The rest of the family comes.

Gyro's feet is invaded by steel and the duo realises that they are dealing with enemies that are assassinating the competition. They realise that the Boomboom's ability is a magnetic power when Johnny's pistol is disassembled and the pieces are attracted to Gyro's feet. Benjamin Boomboom, the patriarch, destroys an incoming Steel Ball aimed at him with his magnetism. Andre's knife flies towards Gyro's neck but he blocks it. Furious at Gyro for almost letting him die, Andre is the first to charge closer to Gyro. Gyro throws his remaining ball at a rock, making a piece of rock shoot through Andre. Seeing the Boomboom Family circle around them, Gyro understands that the magnetism is tied to his proximity to them and thus, the duo flees. As they move away from the Boomboom, the magnetism weakens but Benjamin shoots through the hole in Andre, splashing some of Andre's blood on Johnny. 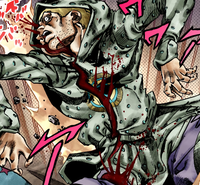 Benjamin is cut in two by Johnny's newly awakened Tusk

Mountain Tim catches up to Johnny and Gyro. As the family observes the incoming demise of their three enemies, Andre feels unwell because of his wounds and Benjamin leave him behind. However, Mountain Tim uses his power to tie himself to two rocks before he can collide with Johnny and Gyro. L.A. approaches and draws Tomb of the Boom 1 2 3 in the sand to summon it. He activates the iron sand and the sand binds all three horsemen. Mountain Tim shoots at L.A. but Benjamin protects him and Mountain Tim is bound by the sand. Tim collides with Johnny and Gyro but Johnny grabs a bullet, hoping to use the Spin with it. He creates a Spin, but Benjamin stomps his hand to deprive him of this weapon. Thinking himself victorious, Benjamin is taken by surprise when Johnny's nails spin and he shoots them, cutting Benjamin in half.