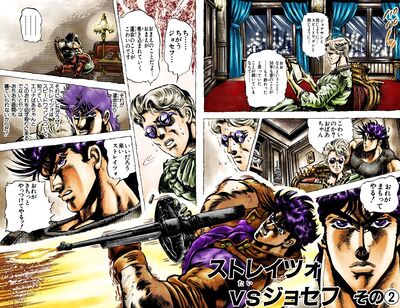 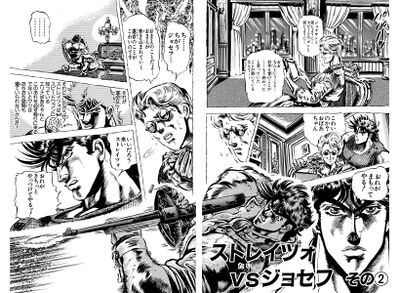 Straizo vs. Joseph, Part 2 (ストレイツォＶＳジョセフ その②, Sutoreitso Tai Josefu Sono 2), originally Master of the Game (ゲームの達人, Gēmu no Tatsujin) in the WSJ and tankobon releases, is the fifth chapter of Battle Tendency and the forty-ninth chapter of the JoJo's Bizarre Adventure manga.

Author's Note
“
I went to Osaka for the first time for a manga seminar. It seemed like a great place with great food and I met some great people. I loved this week!
”
—Hirohiko Araki
“
漫画セミナーで初めて大阪へ。出会った人も食べ物も素晴らしい所で、一週で大好きに！！
”
—Hirohiko Araki