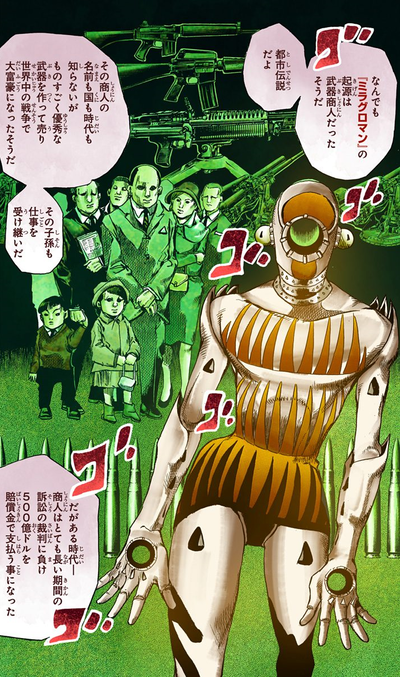 It narrates Joshu's acquirement of a large sum of money, which somehow keeps on growing despite his outrageous purchases.

Josuke Higashikata finally discovers that he is the amalgamation of Yoshikage Kira and Josefumi Kujo.

The story returns two weeks prior to Kaato Higashikata's release. At the Higashikata's, Joshu asks for money from his father Norisuke, as he wishes to buy idol items. After the meet-and-greet, Joshu spends time choosing the goodies he wants to buy, only to be cut off by a fellow fan who already chose what he wanted. Upset, Joshu realizes that this man left his wallet on the counter and steals it just as the man returns to find his wallet. In the restroom, Joshu steals all the cash inside the wallet and the cash card, withdrawing 500,000 yen from his victim's bank account after correctly guessing the code. Happy to have outsmarted his victim, Joshu indulges himself in a shopping spree, trying to buy an expensive wristwatch, several movie tickets for one showing, and eating in a luxurious restaurant. At the same time, due to many coincidences, Joshu doesn't actually lose his money, but accumulates more and more as he tries to spend it. Thinking that he is lucky, Joshu doesn't pay much attention to it.

However, when he tries to spend his money in a bar, the manager and several security guards interrogate him about the money. To Joshu's surprise, the owner is furious that he is trying to give him the money and mentions a "Milagro Man". For unknown reasons, the owner forces more money into Joshu's pocket and tries to beat him up. Joshu uses Nut King Call to fight back and flees. Joshu eventually notices that the staff put even more money inside his bag, making him feel suspicious.[1]

Nervous to have so much money and realizing that whenever he tries to spend his money, he instead receives more, Joshu examines the bills but sees nothing unusual. He decides to gamble in a boat race and wins 3.1 million yen. At first happy, Joshu then notices that the money inside his bag has somehow increased, making it impossible to close. Anxious that someone could discover his money, Joshu tries to hide it inside a coin locker. As he pushes the money inside, Joshu sees that the immatriculation of the bills all finish with "13R". The locker breaks down, letting some of the money fly away, but all the bystander then return the money without asking questions. Joshu then tries to take a taxi home, but the taxi driver then tries to return the money. Joshu insists that he keeps the cash, and the two eventually struggle to have the other one take the money. Joshu accidentally burns one of the bills and sees it multiplying at high speed and to his horror, the money begins to cover him.

Joshu wakes up on his home's couch, thinking that he's merely dreamed the past events. However when he returns to his room, it is flooded with money which falls into him. Joshu tracks down his victim, named Zaihei Nigatake, and blames him for what's happening to him. Zaihei, grateful toward Joshu for taking his "curse", explains everything to him. This cursed money which never goes away from its owner is said to have belonged to an arms dealer named the Milagro Man. The Milagro Man lost a lawsuit and went mad, killing his whole family and setting his mansion on fire, burning everything except a single scorched bill. The curse remained inside the money and two years ago, Zaihei unwittingly took the curse in Europe and returned to Japan, living hell waiting for someone to take the curse. Zaihei advises Joshu to have someone take the money and try to destroy it to pass the curse completely.

When Zaihei takes a bottle of juice and opens it, Joshu reveals that he planted some of the money inside the wrapping. When Zaihei opened it, he unwittingly tore the bills inside, and he sees the money appearing around him and burying him. Zaihei begs Joshu, but the latter departs, cleared of the curse. On his way home, Joshu melancholically ponders his true worth in the world.[2]