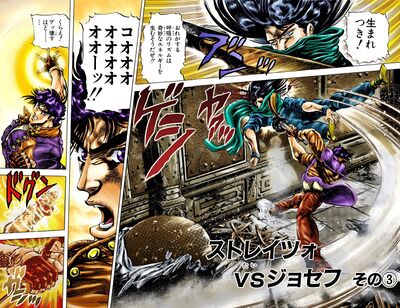 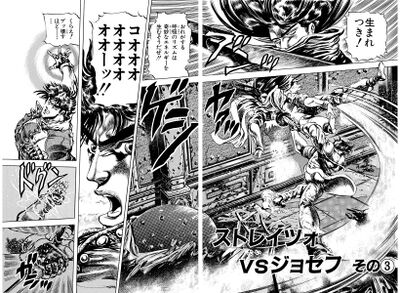 Straizo vs. Joseph, Part 3 (ストレイツォＶＳジョセフ その③, Sutoreitso Tai Josefu Sono 3), originally The Immortal Monster (不死身の化け物, Fujimi no Bakemono) in the WSJ and tankobon releases, is the sixth chapter of Battle Tendency and the fiftieth chapter of the JoJo's Bizarre Adventure manga.

The butt of Joseph's gun successfully connects with Straizo's face, allowing Joseph to release a burst of Ripple into it. Outside the cafe, a woman asks Smokey what is going on inside. However, when he answers truthfully, she assumes he's crazy.

Back inside, Straizo is seen slouching against the wall. Joseph checks to see if his face has melted, but to Joseph's surprise, Straizo is unharmed, immediately firing more beams from his eyes. Joseph just barely manages to dodge the beams by bending backwards, with only the skin of his neck being grazed. Straizo explains that, as a skilled Ripple user, he had prepared in advance by wearing a scarf made of the shells of a rare beetle that absorbed all of the Ripple and scattered and insulated its energy.

Joseph is not impressed and attempts to run away, but not before revealing that he had pinned a grenade to Straizo's scarf. Not amused, Straizo quickly tosses the grenade away with a backhand unaware the pin on the grenade had multiple strings tied to it, with the other side of each string also connected to multiple grenades on Straizo's back. Throwing the first grenade away caused the rest of the pins on the other grenades to pop off, leading to Straizo being caught in a major explosion.

After the smoke clears, Straizo is seen pulling together his dismembered body parts. Smokey, who's in fear, asks Joseph if he has any other plans, to which Joseph replies he's going to use the secret Joestar Technique: running away. Straizo finishes reforming himself and quickly jumps to the second floor of the demolished building.

Author's Note
“
I was born in Northern Japan, so the colder it gets, the better. Winter is, quite frankly, my season!
”
—Hirohiko Araki
“
北国生まれの私は、寒くなればなるほど調子がでる。冬は、はっきり言って私の季節だ！
”
—Hirohiko Araki