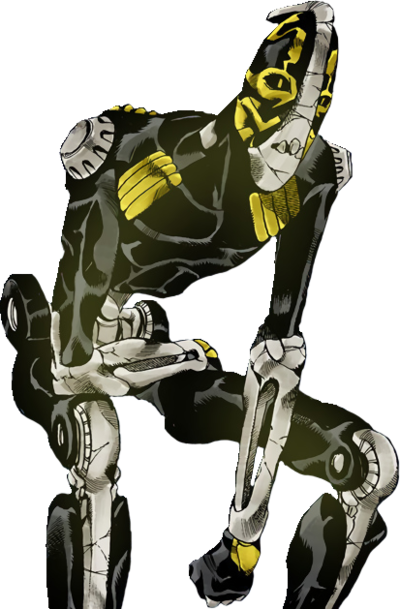 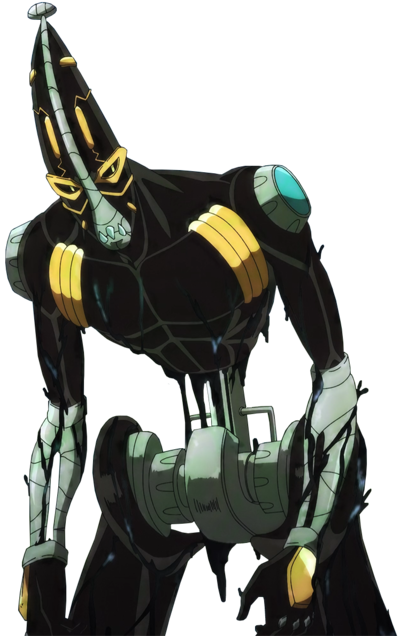 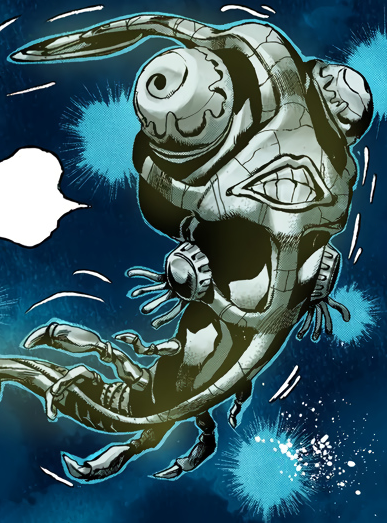 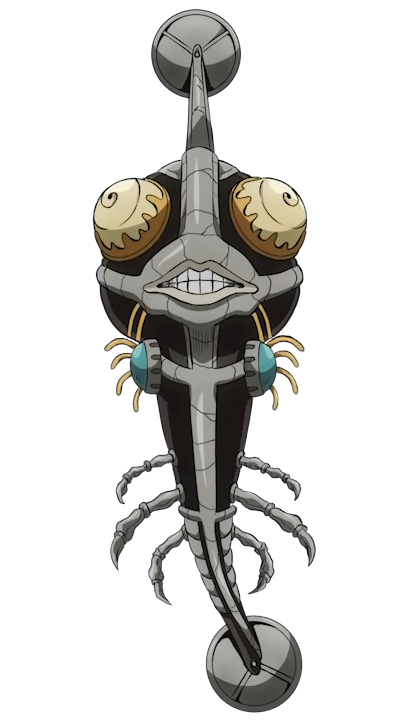 Destructive Power
B
Speed
A
Range
C
Stamina
A
Precision
C
Developmental Potential
B
A
B
C
D
E
A: Very Good
B: Good
C: Average
D: Poor
E: Very Poor
This article is about the Stand. For the character, see F.F..
“
Foo Fighters! If you're going to refer to me, call me by that name!
”
—Foo Fighters, SO Chapter 30: There's Six of Us!, Part 5

Foo Fighters allows bundles of plankton to exist in a humanoid form. Adopting a personality as well as the nickname F.F., it sides with the protagonists of the story.

Foo Fighters takes two main appearances. Naked, it is a tall, dark, robotic humanoid of masculine proportions, and an alien visage, meant to resemble something insectoid or reptilian. It has the appearance of a chameleon, a mutant, or a space alien,[1] and also possibly resembles an alternate version of Hierophant Green.[1] Later, it maintains the appearance of the dead prisoner Atroe; a woman of average height and slim build.

The series is known for alternating colors between media, the information presented below may or may not be canon.
Body(Black and gray, yellow patterns.)
Eyes(Yellow)
Body
(Black, gray and teal with golden patterns.)
Eyes(Golden)

Foo Fighters is highly intelligent and originally commanded with the task of protecting a collection of Stand DISCs by Whitesnake. Jolyne and Ermes help the Stand discover its own consciousness and identity, giving it the nickname, "F.F.". It is implied that if the entirety of Foo Fighters's plankton colony is killed and the Stand is reduced back to a DISC, they will lose all of their memories, learned experiences, and identity, once again becoming a mindless Stand when re-introduced to a new plankton colony.

Foo Fighters is a unique fusion of a plankton colony and Stand. It is able in close combat and possesses a set of useful abilities. At a physical level, Foo Fighters is more than a match for the power type Stone Free, being able to deflect its punches and overpower it.[2] Although Foo Fighters is particularly resilient to physical attacks, it is very dependent on a constant water supply to keep the colony in water and breaks down the moment it is dehydrated.[3]

Foo Fighters multiplying itself in the water

First and foremost, Foo Fighters' nature means that it has no physical weakness. There is no limb to hurt or vital point to strike to kill it and thus it is impervious to conventional attacks. Only by damaging the whole colony can Foo Fighters be threatened. Although fragile individually, the colony can muster enough strength to pry open an automatic door.[4]

As a hive mind, Foo Fighters can produce sub-bodies by splitting the colony into several like-minded but independent parts.[3][5] This ability allows Foo Fighters to effectively fight multiple opponents and generally act stealthily in the middle of battle. Even if a large majority of the plankton dies, only one needs to survive for Foo Fighters to be able to regenerate.[6] As long as there is water, the plankton colony can rapidly multiply,[5] creating a new part of Foo Fighters rapidly and giving it great regeneration ability. With enough water, Foo Fighters can even cover a whole room and use its mass to attack.[7]

It also means that ordinary humans can see the body.[8]

On the other hand, Foo Fighters is extremely susceptible to dehydration. If its moisture is sucked away by dry matter, the plankton colony rapidly dies and will disappear. Foo Fighters thus needs constant access to water to survive.[7]

By infiltrating someone's body, Foo Fighters can take over their consciousness and have access to their memories.[3] That way, it can wear their skin as a disguise to infiltrate human society. It took over the corpse of Atroe and spends the rest of the story impersonating her. It can also shape its host to its liking[9] and contort itself beyond what a human can do.[10]

The parasitism allows Foo Fighters to survive without a constant intake of water, but it reduces its agility. Moreover, it becomes susceptible to bleeding out and losing the moisture anyway.[11]

Foo Fighters can manipulate water to some extent, with enough control to create a square mirror out of one third of a cup of water.[12]

Inside a host, Foo Fighters can shoot small parts of itself as if it was using a gun (this is later shown to incorporate pistol parts into its hand).[13] The bits of plankton colony can invade someone's body and take control of it.[14] The shots have enough strength to pierce through skin.[15]

The plankton can help seal wounds, preventing someone from bleeding out and potentially saving them from dying.[16] 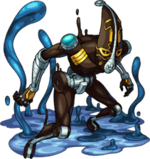