A summary of Rohan Kishibe's history and movesets in video games. 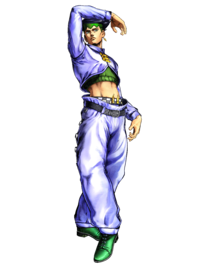 Rohan makes his first playable appearance in the PS3 title. As one of the mass majority of playable characters in the game with the "Stand" Style, Rohan can turn Heaven's Door on/off, changing movesets, as well as having access to the Stand Rush ability returning from the Capcom game, being able to attack in conjunction with his Stand.

As Heaven's Door has never been shown engaging in physical combat, most of Rohan's fighting ability makes use of Heaven's Door's power or his own art equipment. Exclusive to Rohan is the ability to use "Seals", which lock off certain types of attacks and skills from the opponent for five counts of the battle timer, making them flinch every time they attempt to use a locked off skill and giving Rohan an opening to attack. However, if Rohan is hit at all, every lock will be instantly nullified. Rohan has 1000 HP.

ON GROUND
Rohan can summon or recall his Heaven's Door, changing the way he plays.
Safety Lock

ON GROUND IN AIR OK
In place of normal attacks, Rohan draws Heaven's Door's silhouette in the air with his finger. If the opponent touches it, one of their normal attacks is sealed. The normal attack sealed corresponds directly to the attack button inputted to produce this move. This move can also be used on a downed opponent. (Comboable through Puttsun Cancel)
You dare insult ME, cretin?!

ON GROUND
A special taunt. If the opponent has successfully taunted Rohan while he's down, he can input his own taunt immediately afterward to regain not only his lost HHG, but gain bonus HHG at the cost of potentially leaving himself vulnerable on recovery.
Special Moves (Stand Off)
What would I do if I were a manga hero?

ON GROUND
Rohan throws a number of pen tips as projectiles. (Comboable through Puttsun Cancel)
I must keep drawing!

ON GROUND
Rohan, paintbrush in hand, swings upward, knocking the opponent off their feet and onto the ground. This move can only be interrupted by Throws or HHA/GHA, and doubles as an anti-air. (Comboable through Puttsun Cancel)
Your abilities are spent!

ON GROUND
A Throw. Rohan extends his hand to grab the opponent. If it connects, he will pick the opponent up by their collar and swiftly write on their face with a paintbrush, before pushing them away and onto the floor. This seals abilities pertaining to the opponent's Style and the Style Button;
Special Moves (Stand On)
I'll be the first to strike!

ON GROUND
Heaven's Door rushes forward in a flurry of punches. This move has two follow-up attacks. (Comboable through Puttsun Cancel)
Knocked back at 70 km/h!
(after "I'm on the rise!")

ON GROUND
Heaven's Door writes into the opponent "I will fly backwards at 70km/h", sending them into the stage wall.
Time for you to be retired!
(after "I'm on the rise!")

ON GROUND
Heaven's Door takes material out of the opponent, stealing some of their HHG and knocking them to the ground.
Throw
Throw - Rock, I win!
2 ATK buttons at close range or

ON GROUND
Rohan pushes the opponent off-balance and delivers a swift punch that knocks them down as he points at them.
Heart Heat Attack / Great Heat Attack
Your reality is mine!

+ 2 ATK Buttons ON GROUND
Rohan's HHA, "Your reality is mine!", has him send Heaven's Door fly at the opponent. If it hits, Heaven's Door turns a section of their face into 'material'. Rohan then quickly walks up to them, rips a piece out, and guffaws. The HHA seals all of the opponent's skills, leaving them with just their normal attacks.
Heaven's Door

ON GROUND
Rohan's GHA, simply named "Heaven's Door", sends Heaven's Door to fly a short distance. If it hits the opponent, they are knocked onto the ground sitting, before their entire face is turned into material. Rohan walks up to the vulnerable opponent and writes on the material to generate a safety lock. When he finishes, it shows that Rohan wrote "I cannot attack Rohan Kishibe" on the margin, and he proceeds to palm the opponent's face closed, sending them flying. This GHA, despite doing the second least amount of damage of all the GHAs (behind the GHA of "Kosaku Kawajiri"), completely seals all of the opponent's normal attacks, skills, moves, and abilities pertaining to their Style. This means that the opponent is able to only defend themselves for five counts of the battle timer with no possible way to attack or directly damage Rohan.

Rohan is a low-damage fighter, relying on his seals and ability to rapidly build the Heart Heat Gauge in order to effectively battle. Having attacks at all ranges and many opportunities to use HHG-consuming actions (HHA, GHA, Stand Rush, and Puttsun Cancels) more frequently makes up for Rohan's sub-par damage output. Rohan can force his opponent into a defensive playstyle with a combination of the right type of seals and attacks, but can be properly countered with characters that are not as hindered by certain seals than others.

His knocked down animation has him move his pen on the floor which is a reference to him writing notes after being pummeled by Josuke after hearing about his hairstyle's backstory when introduced as an antagonist.

Rohan was confirmed for the game alongside Okuyasu and "Kosaku".

Like in All Star Battle, Rohan compensates his mediocre damage output and combo pontential with the powerful ability to lock off his opponents' attacks.

As a Stand User, Rohan is one of many characters with wildly varied abilities that grant him uniqueness in battle. Opponents hit by Rohan's skills will be Sealed, and will have their abilities locked off accordingly until either enough time has passed or Rohan is hard knocked down.

He is paired with Jean Pierre Polnareff in the Eyes of Heaven Tournament, but was eliminated in the preliminaries by Giorno Giovanna and Guido Mista. 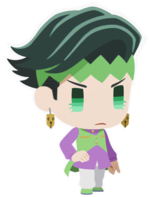 Replaces random panels with partner's panels and enhances them 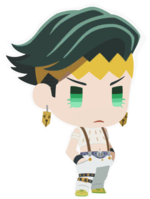 Skill: I'll see through your cheating

Cost: 0
After 5% of the timer depletes, increases skill gauge by 50% (once per battle). 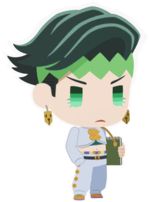 Skill: Changing luck with your own strength

Replaces random panels, except for Rohan and block panels, with enhanced Rohan panels
Replaces more panels if there are less block panels 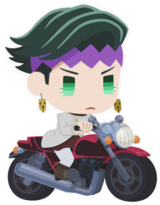 Replaces the area around a random panel with Intensified Rohan Panels, having priority on the panels around box panels. 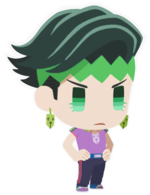 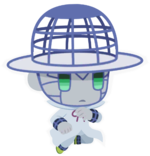 Skill: Get the remote controller

Erases panels in a slanted line. By using the skill, the Boost Lv is raised, increasing the number of erased panels (Up to Boost Lv 5). Raising the Skill Level increases the Max Boost Level.

Cost: 0
After using skill 3 times, enhanced panels will fall for 5 seconds (once per battle).

Rohan appears as a 1-Koma character (which provides immunity from the Battle and Support Seal status effects) and as a menu explanatory character, representing the JoJo's Bizarre Adventure franchise. This is also his first appearance in any game media.

Rohan appears in Diamond Records as both a playable character and the player's guide, explaining the game's mechanics and modes.

Rohan was one of the characters first confirmed during the game's announcement. 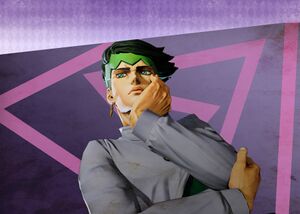 File:Rohan Kishibe (JJBATA Last Survivor).jpg
Rohan Kishibe
Skill Name
Button
Description
Release Level
Rush
R2 (Repeat)
Consecutive Normal Punches.
-
Pink Dark Boy
R1
Install a trap to stop an enemy from moving. A destination marker is displayed by pressing and holding R1. Two traps can be installed at the same time, but up to 4 can be installed at higher levels.
-
Memory Leak
X (Hold)
Reads the memory of an incapacitated enemy, increasing the User's own power. Can only be used once against the same opponent.
-
Stand Remote Control
L2 (Hold)
Separate the Stand from the main body and operate it remotely. There is a limit to the distance that the Stand can be operated remotely.
-
Heaven's Lock
L1
Punches forward. If hit, an enemy is banned from all Stand powers for a certain period of time. Can be used up to 2 times per game. (Can be activated even during remote control)
Level 3
Character Difficulty: ★ ★ ★
Type: Disruption