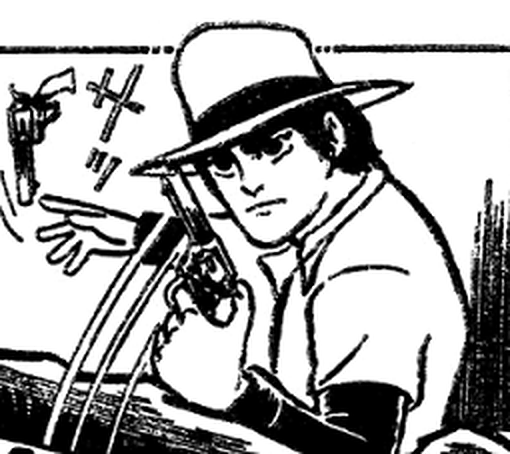 Outlaw Man
For the one-shot, see Outlaw Man
“
I gotta get away. This can't go on for too long.
”
—Outlaw Man

The outlaw man (アウトロー・マン, Autorō Man) is the unnamed protagonist of the one-shot Outlaw Man.

He is a criminal on the run from a group of Pinkerton agents. Throughout his escape, he rides a horse named Cameron.

The outlaw is a man of slim build with dark hair and dark eyes. He is dressed in typical cowboy fashion, consisting of a hat, boots and a holster for his revolver. Due to a prior engagement, he has a wound on his right hand. 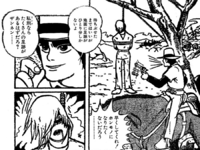 The outlaw man is perceptive of his surroundings

The lone outlaw is a careful individual, but is also desperate to cover up his tracks and escape the Pinkerton detectives. Little of his personality is conveyed, but the outlaw appears to be a typical cowboy, quick-witted and quick on the draw. He demonstrates resourcefulness and strategic ingenuity, such as using a rabbit to trick his pursuers. He is also perceptive, being able to tell if an ambush is being planned out, and notice the glint of a rifle from a distance. Despite his callous exterior he cares about his horse, Cameron, and puts it down after a near fatal attack.

It is mentioned that he has no goals, other than to escape, and nothing to gain.[2] 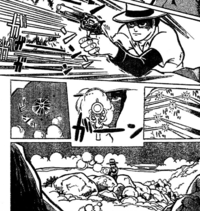 The outlaw is an excellent marksman

The outlaw is an excellent marksman, as he uses ricocheting to his advantage to shoot the detectives. He wields a .45 caliber gun.[2]

The protagonist is a runaway outlaw during America's pioneering era with a bounty on his head for an unknown crime. Wherever he goes his pursuers follow and he struggles to erase his tracks. 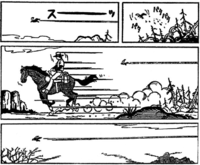 On the run with nothing to gain

The outlaw is pursued by a trio of Pinkerton detectives after a bounty is placed on his head. He rides on his beloved horse, Cameron, through the desert, injured in his right hand from a previous encounter with them.

The outlaw encounters a man hanging from a tree but becomes suspicious of his hands tied behind his back, believing that they may be hiding a revolver. Additionally, he notes that there is only one set of footprints on the ground around the hanged man, when there should be more if he had really been hanged. After explaining all of this vocally, the outlaw orders the man to drop his gun or get shot, causing the man to open his eyes and reveal that he had created a fake torso and hidden his gun underneath. Before the hanging man can fire a shot, however, the outlaw's quick thinking allows him to break the rope suspending the man with a shot from his revolver, giving time for the outlaw to escape while the man regained his bearings.

Upon encountering a river the outlaw forms a plan to hide his tracks, making a bridge of rocks to the other side and using the river to hide his scent. After he's set his bridge, he calmly directs his horse across and then carefully sets the rocks back to where they were.

Despite this plan, the detectives manage to catch up to him, but a sudden reaction from a flock of birds draws his attention in time to notice the brief glint of a rifle scope in the distance. Unable to dodge in time, he takes a gunshot wound to his right side and is forced to abandon his now grievously injured horse. Hiding amongst a grouping of nearby rocks, he sorrowfully uses his gun to put Cameron out of his misery before continuing his escape.

As he flees he fires off several shots from his revolver, drawing in the pursuing detectives only for it to be revealed that he'd merely shot a rabbit. Realizing that the gunshots were bait for a trap, the detectives quickly take cover behind a set of large rocks, but the outlaw, undeterred, fires a volley of bullets into a rock behind them, embedding them in its surface. Tossing his now spent revolver for a fresh one, he fires another volley at the embedded bullets and ricochets them at the hidden detectives, seriously wounding their leader and seemingly killing the remaining two. With his pursuers now dealt with he walks off limping into the horizon, continuing his endless escape.[2]