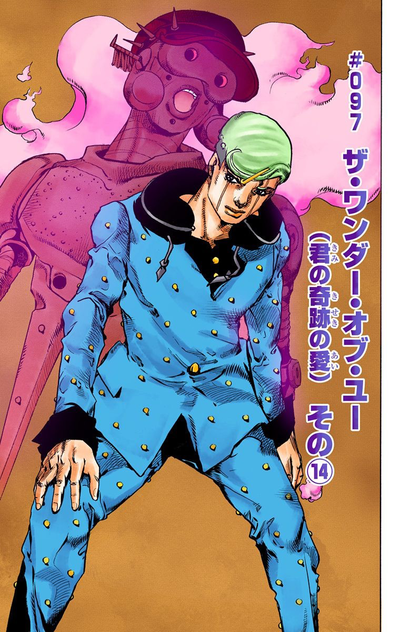 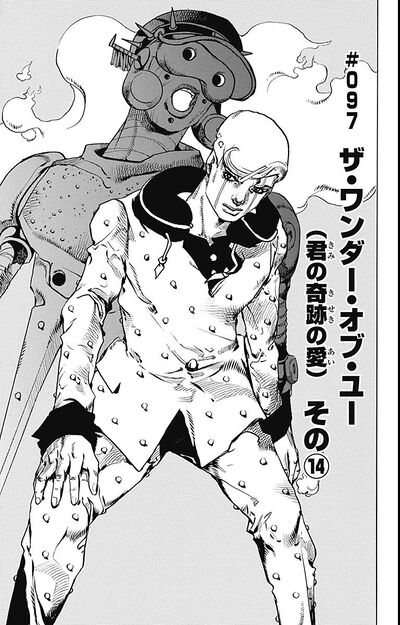 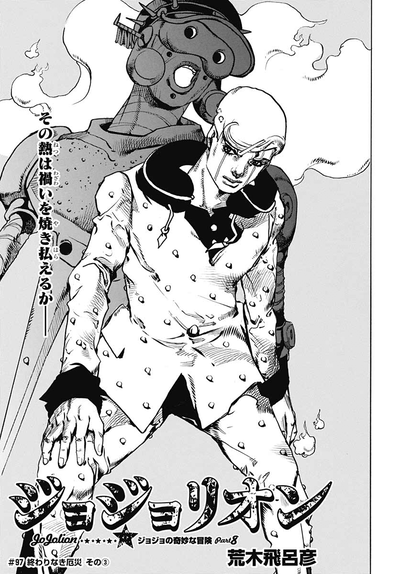 Despite Mitsuba's warning, Jobin follows through with his attack on Satoru Akefu, who has snuck under the bedsheets. However, nothing seemingly happens. Jobin lifts the sheets, only to find a damaged can of hair spray. The can bursts, but the blast is weak enough for Jobin to shield himself with a pillow and the can itself is propelled around with no apparent effect. Jobin asks Mitsuba where the hospital director is but Mitsuba is just as ignorant. She still confirms that the enemy is a Stand taking the form of Akefu and causes various calamities while trying to locate the Locacaca, which has been happening since her return from the TG University Hospital. Mitsuba also correctly guesses that Yasuho, Rai Mamezuku and Josuke must be victims of the same attack at the moment. Mitsuba wants the family to get out of this situation somehow, but Jobin understands she implies that keeping the new Locacaca is somehow the catalyst of the attack. Despite his love for his family, Jobin refuses to let go of the fruit and decides to look around the house and find the enemy.

When Jobin looks at the monitors of the household's cameras, he sees Yasuho agonizing in front of the garage, but also Toru standing nearby. Worried, Jobin then notices that he's bleeding from the mouth. He realizes that he's feeling strangely weak and that he's heavily bleeding. Jobin opens his jacket only to see the dip tube of the hair spray can has pierced his chest and that blood is flowing out of it at an alarming rate. Jobin collapses and the pot pushes the tube further inside of his body, which makes a large quantity of blood spurt out of Jobin. Jobin calls out to Tsurugi and loses consciousness as the potted Locacaca rolls towards the door to the garage. The Higashikata Family realizes what has just happened. Meanwhile, Toru patiently waits by the estate, listening to songs on his music player such as Ozzy Osbourne's Crazy Train and Elvis Presley's The Wonder of You. As he sings to the tune of the songs, Toru ignores Yasuho, who is still wounded and on the ground, begging for help.

Meanwhile at the TG University Hospital, the delivery man that Josuke has paid reaches his destination: a reporter from the science journal "Pangea Land" named Taoka. The reporter seeks Akefu in a waiting room for their scheduled interview and finds the hospital director mysteriously facing a corner of the room. This time, the silhouette turns back to reveal the seemingly real Satoru Akefu and the two men exchange their business cards. Akefu notes Taoka's pimples and proposes to have them treated at the hospital. However, the reporter reveals that he's received a package containing a video of a bedridden Holy Joestar-Kira dating from 40 minutes ago, footage of the secret laboratory in the hospital, and a sample of a broken Locacaca in a jar. The reporter thus makes a connection between these clues and implies that the hospital is conducting illegal trials on humans. Upset, Akefu asks the journalist if he is "pursuing" him, to which Taoka eagerly confirms that he'll chase him down (as a journalist) and have the hospital shut down.

To the journalist's confusion, Akefu then theorizes a sequence of events. The hospital director raises the possibility of the fruit sample being a mere fake, which must mean that the journalist has opened the jar to check it and thus, somehow, gotten a bit of the fruit on him by sheer bad luck. Akefu thus calmly leaves the room, confirming that the fruit is indeed a Locacaca. Taoka tries to stop Akefu from leaving, but the reporter realizes that his pimples have been cured. It is then revealed that the reporter's neck has been petrified during this involuntary equivalent exchange, killing the man on the spot. As a result, Taoka's neck breaks, and the sample of Locacaca falls to the ground. Akefu then exits the building and Rai Mamezuku notices the hospital director walking behind him. Seeing this, Mamezuku concludes that both of them are going towards Josuke's location. Meanwhile, Josuke still waits for the hospital director to arrive.

Back at the Higashikata House, Toru is somehow made aware of Josuke's plan of having the doctor come to him. The estimated time of the harvest is now 2 hours, 11 minutes.

Author's Note
“
I'm hard at work drawing, so you don't have to worry about me. Please continue to be careful, everyone.
”
—Hirohiko Araki
“
コツコツ描いてますので、私に関してはご心配なく。皆さんも引き続きお気をつけて。
”
—Hirohiko Araki