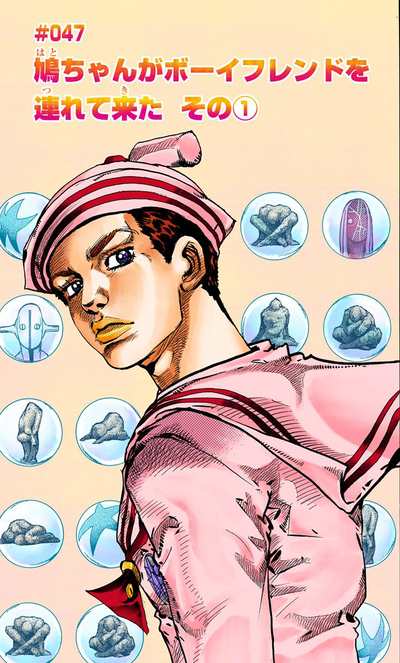 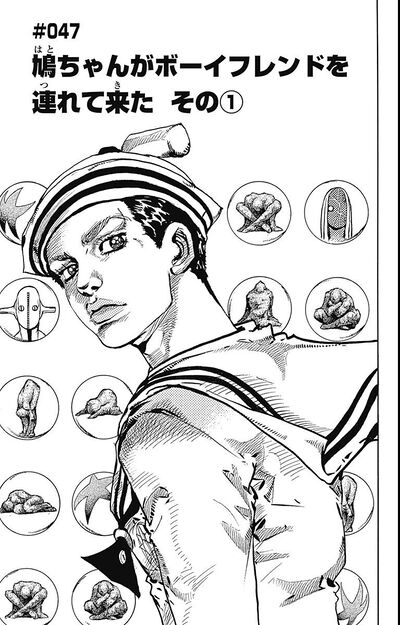 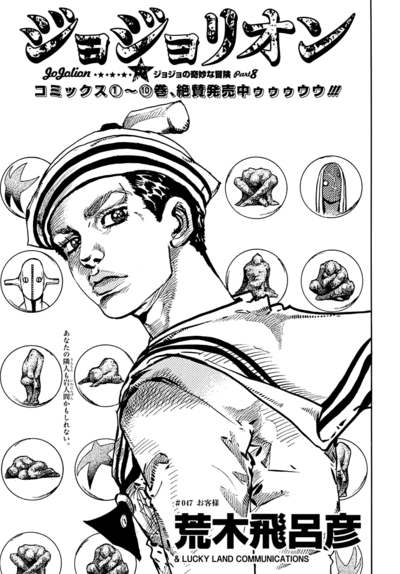 A summary of the Locacaca Tree is given. The Locacaca is a plant from New Guinea that was formally discovered during an Australian expedition in 1938. The Locacaca was already very rare for the native New Guinean, who occasionally used the fruit to cure various ailments. During World War II, all reports of the fruit disappeared and it became a mere legend.

Yasuho and Tsurugi are sitting in Yasuho's family room and are having a telephonic conversation with Josuke. Yasuho has done some research about Josefumi Kujo and asks why Josuke is interested in him, to which Josuke answers that Josefumi might be his original identity. He then plans to go at Josefumi's house for further investigations and asks Yasuho if he can find a picture of him.

Josuke's conversation is interrupted when he sees Hato coming back. Daiya and Joshu become incredibly excited, as Hato has brought her first boyfriend home. Daiya explains the situation to Josuke and enthusiastically asks how handsome is Hato's boyfriend. However, he and Norisuke are flabbergasted to see that the man in question is rather ugly, being short, overweight, adorning a horseshoe mustache and wearing a tracksuit. He introduces himself as Tamaki Damo, manager of a cleaning store and 23 years old. Joshu finds the situation hilarious and openly mocks Damo, which infuriates Hato. After she presents every family member, the meeting is made all the more awkward when Joshu forcibly removes Damo's sunglasses, his sudden movement revealing a bald spot. After that, Damo offers Norisuke some youkan. It is at that time that Nijimura and Norisuke notice separately strange fingerprints on the family room's door handle and the youkan box, Nijimura trying to clean the fingerprints on the handle. When Norisuke asks how recently Hato and Damo have been seeing each other, Hato takes her boyfriend to the table, casually revealing that they've had sex twice so far, shocking everyone and making Joshu laugh again, on whose bracelet are the same fingerprints.

Author's Note
“
I read Stephen King's "Doctor Sleep" during summer vacation. It's been a while since I've read a book this thick.
”
—Hirohiko Araki
“
夏休みにS・キングの『ドクター・スリープ』を読んだ。久々に大作の読書した。
”
—Hirohiko Araki