Every Day Is a Summer Vacation, Part 4 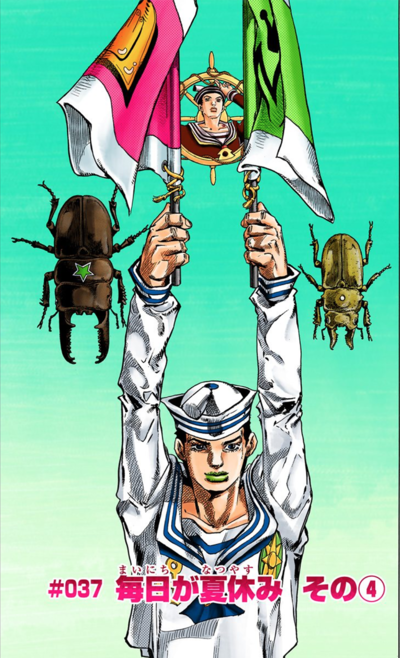 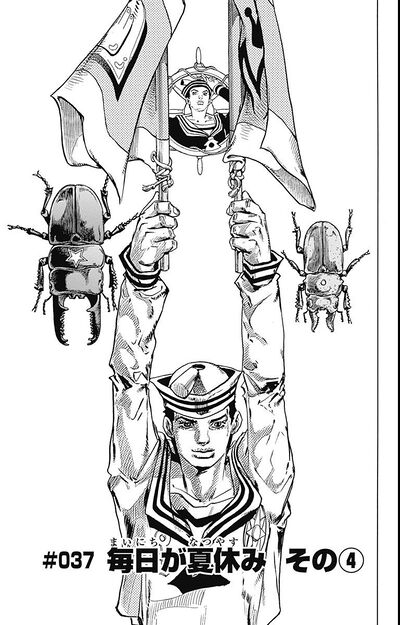 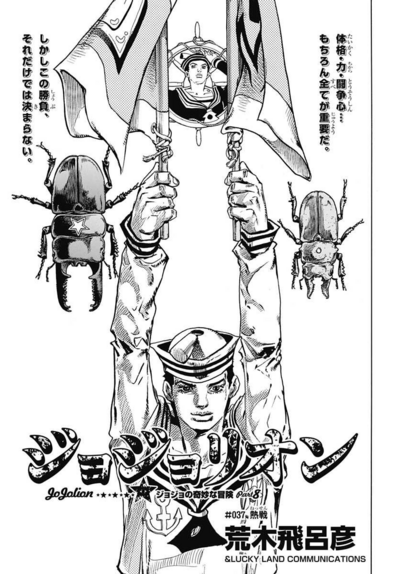 Every Day Is a Summer Vacation, Part 4 (毎日が夏休み その④, Mainichi ga Natsuyasumi Sono 4), originally Heated Match (熱戦, Nessen) in the UJ release, is the thirty-seventh chapter of JoJolion and the eight hundred eighty-fourth chapter of the JoJo's Bizarre Adventure manga.

The Rosenbergi is now kicking the Palawanicus, as if it was directly controlled by Jobin. Another one of the Palawanicus' legs is cut off and Josuke notices a liquid oozing from the Rosenbergi. He has to defend the Palawanicus's third leg with bubbles, but the Rosenbergi lifts it up. Josuke's beetle slips and falls out of the ring; however, Jobin points out that the round's already finished because they went over 45 seconds, so they have to go another round. Josuke tries to pick up Jobin's brush but Jobin doesn't let him. However he has already used the bubbles on it. He then asks about the suspicious liquid oozing from the Rosenbergi, which Jobin presents as wax; when the wax melts, it causes convulsions on the beetle and one can control it like a zombie.

The second round begins. Josuke stealthily transports a bubble which plundered the air around Jobin's brush near a thermometer and is stunned when he sees that the temperature went as high as 60° Celsius. Meanwhile the Palawanicus begins to run away. The Rosenbergi charges at it, and manages to snap one of the Palawanicus' mandibles and wings. As the wax melts, the Rosenbergi then lunges at the Palawanicus, dives under it, and cuts off another leg. The Rosenbergi is feigning death again, and as the Rosenbergi bites its neck, Josuke catches a glimpse of Jobin's Stand: Speed King.

Josuke understands that Speed King's power involves temperature manipulation and that the beetle fight was a cover for a Stand fight. Joshu, ecstatic at the fight, knocks the tank where the hornet was killed, but neither he or Jobin have any idea why it is on the ground. They realize that the bottom half of the hornet is missing, and is now near Josuke. Suddenly the Rosenbergi is convulsing and another liquid is oozing out of it. It behaves erratically then collapses, finally exploding. Josuke has planted hornet venom on Jobin's brush and the latter only notices it now. Josuke wins and takes the key of the Lamborghini, while Jobin throws his brush away in a fit of rage. Josuke leaves but Jobin stops him, beginning to get suspicious. Nonetheless, Josuke manages to give the key to Tsurugi and Yasuho with a bubble and they go to the garage investigating the car. Meanwhile, Jobin understands that Josuke has been planning this fight since the beginning and questions him about his motives.