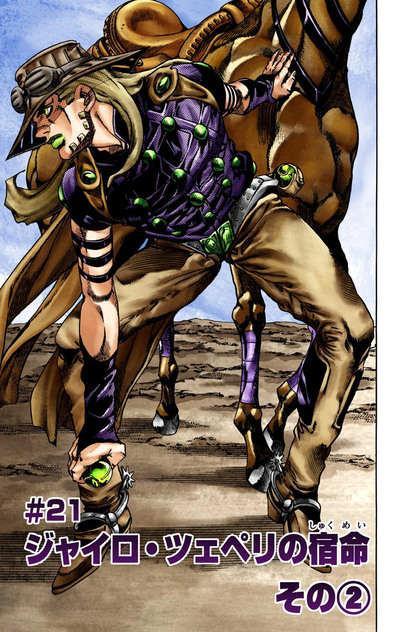 It narrates Gyro's youth as an executioner for the King of Naples and the circumstances of his admission to the Steel Ball Run.

Fully awakening his profound Stand, Johnny incapacitates L.A. Boomboom to finally disable Tomb of the Boom's magnetism. Before leaving him to die by himself, L.A. reveals that they were hired to kill Gyro and is promptly left in the desert. At Johnny's insistence, since Gyro is the cause of their troubles, he reveals his past to him.

A flashback narrates Gyro's past. Gyro is a citizen of Naples, who learned the Spin from his father and worked as an executioner. Before the Steel Ball Run race began, he objected at Marco's execution since he was unrelated to the crime, but he didn't have any way to stop it. One of the counselors he knew proposed him to participate to the Steel Ball Run race, as winning could bring Naples enough glory for the King to proclaim a general amnesty, otherwise the prize money was enough to pay for Marco's appeal. Gyro accepted.

Oyecomova arrives at a relay village where the racers are supposed to register themselves. He realizes that Gyro, Johnny and Mountain Tim have arrived before him. Mountain Tim confronts Oyecomova but is incapacitated by his Stand Boku no Rhythm wo Kiitekure's explosive power. Oyecomova reveals then that he is after Gyro's head.[1]