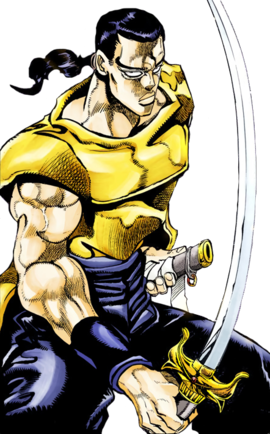 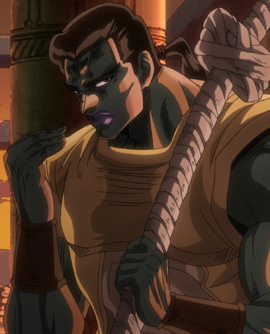 JoJo's Bizarre Adventure (SFC Game)
Heritage for the Future (playable)
“
Father deserved to die, and so did that other guy! And now, I think I'll cut you in half too.
”
—Chaka possessed by Anubis, Chapter 193

Chaka (チャカ, Chaka) is a minor character featured in the JoJo's Bizarre Adventure, Stardust Crusaders. He is an Egyptian farmer who found Anubis in a pile of rubble and was possessed, prompting him to go battle Polnareff.

Chaka is tall with brown skin, black hair and bold lips. He wears a ragged tunic that would suit a poor farmer of his stature, and he wore his hair in a ponytail. He was either too poor or his father thought him undeserving to wear shoes, so he is seen bare-footed.

Chaka is a quiet young farmer who was looked down on by his own father. He wasn't allowed to try anything (as no one let him touch the Anubis Sword at first) and was deemed useless, but he still remained loyal to his father regardless. He is described by Polnareff as a good and honorable man, as most Stand users were known to attack from behind while Chaka presents himself for face-to-face combat. It is unknown if Chaka's personality played a role in this decision, or if the Anubis Sword was overconfident in the abilities of its new vessel.

Chaka temporarily wields the Stand Anubis when he picks up the sword. It is a Sentient Stand that possesses Chaka's mind and makes him a deadly fighter despite his lack of experience. Polnareff notes that his stance and grip are like an amateur's.[2]

Chaka was a young farmer who was always bullied by his own family, who had deemed him as useless. When they found the Anubis sword Chaka was the only one who managed to unsheathe it. Upon drawing the sword he started to hear a voice coming from it and stabbed his father by accident. The sword began to act by itself and killed one of Chaka's companions, and then possessed Chaka and made him finish off the other. He sought to attack Jean Pierre Polnareff, presenting himself for a face-to-face battle but was defeated after a harsh fight. Even though Polnareff shot his Silver Chariot's sword through Chaka's neck, the injury didn't kill him and only left him immobilized.

Chaka's role within Story Mode remains mostly the same as it did in the manga. After DIO steals the Anubis Sword from a museum warehouse, Chaka finds it by chance and then becomes possessed by Anubis. Anubis, who is grateful for being "rescued from the darkness of the warehouse", forces Chaka to engage the Joestar party in Egypt. He is defeated by Polnareff in the canon storyline of the game and is notably the only Anubis enemy to appear in the main storyline. (Khan and Anubis Polnareff are not encountered.)