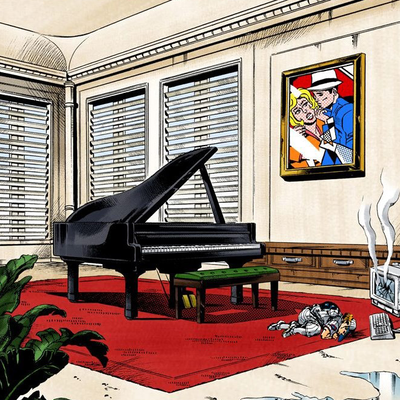 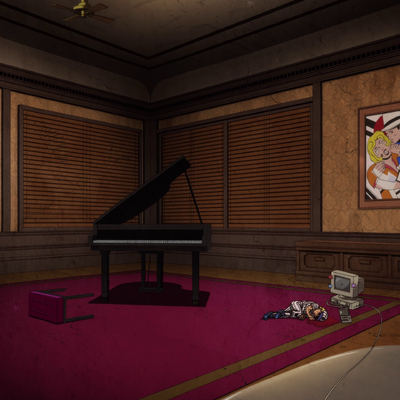 Burning Down (ASB)
Burn the House Down (Netflix)

Burning Down the House (バーニング・ダウン・ザ・ハウス, Bāningu Daun Za Hausu) is the Stand of Emporio Alnino, featured in the sixth part of JoJo's Bizarre Adventure, Stone Ocean. This Stand is a pure ability and allows Emporio to interact with the ghosts of a room and the objects contained within.

Burning Down the House has no physical form, it materializes the ghost of a music room hidden behind an invisible crack on the wall of a staircase in Green Dolphin Street Prison. Its most defining features are a grand piano complete with a seat standing at the center over a large carpet and a Lichtenstein print on the wall. The room also incorporates a chair and a small table on which lies a plate with a can and a glass of orange juice and a Mars chocolate bar.[1] Other pieces of furniture include various drawers and shelving units which hold several books and miscellaneous objects.

Despite the Stand's own lack of combat-related abilities, Burning Down the House's utility through the use of its ghostly objects allows Emporio to effectively assist Jolyne throughout Stone Ocean.

Burning Down the House allows Emporio to see, touch and use the ghosts of objects and rooms.[1]

In 1984, Green Dolphin Street Prison caught fire and several rooms were completely burned down and eventually replaced through renovations. Emporio is able to see and use the ghosts of the objects destroyed in the fire, but also access the destroyed piano room through a hidden crack on a wall. Due to their nature, the objects are of limited use; for instance, a ghost chocolate bar can be tasted but not eaten as it falls through Emporio's mouth.[1] However, he was able to use a ghost computer freely to do research.[2] He can fit ghost objects in his pockets or a tiny bag[3] regardless of their size.[4]

To enter the piano room, an attuned person must pass through a slim crack on the wall of a stairway in which everything seems flattened.[1] Any Stand user is able to see the crack in the wall leading to the piano room, but those not in the know about Emporio will not pay attention to it.[5]

There is also a ghost gun which Emporio can wield, but its nature makes it harmless as it cannot kill any living being. However, the bullets can interact with other ghost objects such as books.[1] After duplicating bullets with Ermes Costello's Stand Kiss, Emporio can essentially fly by shooting the duplicated bullet and then taking off the sticker from the remaining bullet, causing him to spring toward the direction of where the bullet was fired.[6]