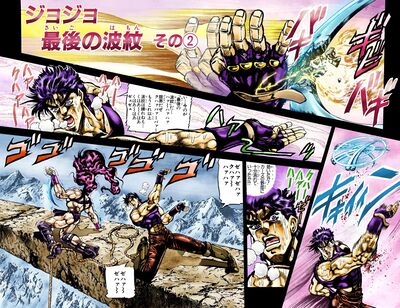 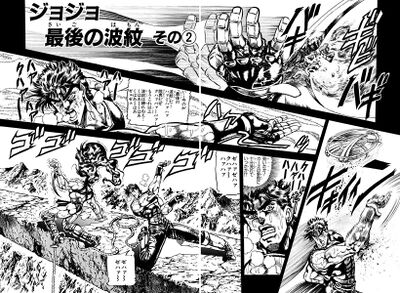 JoJo: The Final Ripple, Part 2 (ジョジョ 最後の波紋 その②, JoJo Saigo no Hamon Sono 2), originally The Tragedy of George Joestar (ジョージ・ジョースターの悲劇, Jōji Jōsutā no Higeki) in the WSJ and tankobon releases, is the sixty-fourth chapter of Battle Tendency and the one hundred eighth chapter of the JoJo's Bizarre Adventure manga.

Back in the present, Stroheim and his Nazis begun blasting their UV rays at Kars, but at that moment Kars reveals he is wearing a Stone Mask with the Red Stone of Aja placed within it. Stroheim orders to cut the power, but it is too late. Kars has finally accomplished his goal. The Ultimate Thing is born.

Author's Note
“
The apartment building where our new studio is located at is currently almost completely unoccupied. The elevators are actually really creepy at night.
”
—Hirohiko Araki
“
仕事場のあるマンションは現在ほとんど人居者無し。夜のエレベーターがとても怖い
”
—Hirohiko Araki