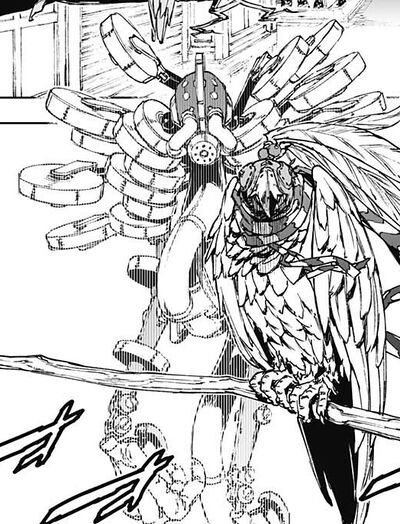 CDDH Chapter 1 (Ability only)
CDDH Chapter 2
“
T-This is... my body's moving on its own...! There's no doubt about it! This has to be that Parrot's... Stand attack!
”
—Hol Horse, CDDH Chapter 3: Crazy Diamond's Demonic Heartbreak #3

This unnamed Stand possessed by Petsounds is featured in Crazy Diamond's Demonic Heartbreak, a spinoff manga of JoJo's Bizarre Adventure.

Petsounds's Stand has the appearance of a mechanical bird, slightly larger than its user. The head is small, with it having tubes protruding out from it, and a large ridge along the top. While its central body is unseen, it appears to have a thin torso with several appendages. These arms have several circular joints which connect to several circular reels. These reels can unfurl into long thin strips, similar to a tape dispenser.

The Stand's legs are also fully mechanical in appearance, with them starting from the center of one of the reels. These legs have other reels attached where a knee joint would be, and they connect to large mechanical talons (similar to that of a large predatory bird)[1] 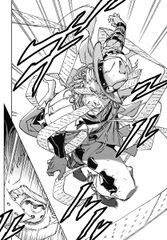 Petsounds's Stand, while not fully understood, appears to be a powerful long-range Stand that uses the memories of Pet sounds against its targets.

Petsounds's Stand's primary form of attack is to use sound. By making the sound from an event such as a noise or a voice, Petsounds can force anyone who hears this sound to relive the event. This is identified by their eyes gaining a dimpled texture.

This ability appears to use punched cards to replay a sound from the past inside of a person as well, such as when it was used on Hol Horse to relive his confrontation with DIO. When someone hears someone relive a past event, they are forced to reenact the event, such as Hol Horse moving to shoot as he did in his confrontation with DIO.[2] This can even be done to those who have not lived through the said past event, such as Hiraoka who was forced to relive the experience of Wilson Phillips, which caused him to crash his car.[3] Petsounds can also do this to multiple people at a time, as he was able to force several pastry chefs to reenact the actions of women who sacrificed themselves to DIO. [4]

The only limiting factor to the Stand's ability is the range of the sound. If someone is out of the range of the sound then they won't be forced to relive the event. It also appears that a way to stop oneself from reenacting an event is by gaining a powerful emotion, as Josuke was able to break free from it by flying into a rage or remembering another strong memory. This was shown by Hol Horse when he was able to stop reenacting his interaction with DIO after thinking about him fleeing Cairo with Boingo and witnessing Kakyoin's final emerald splash.