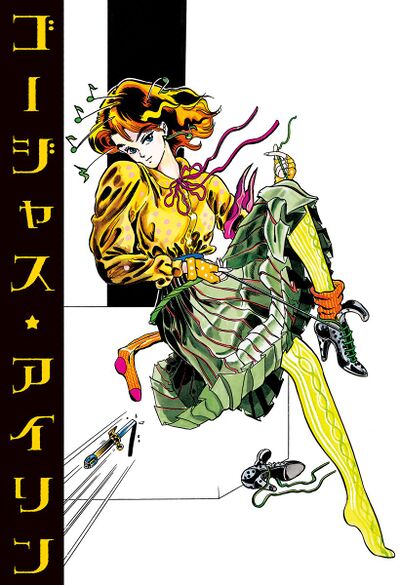 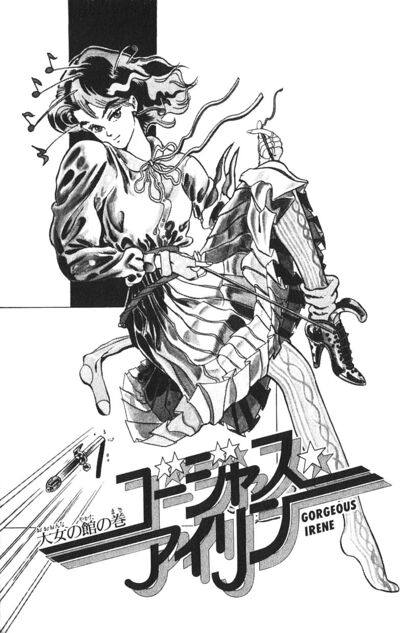 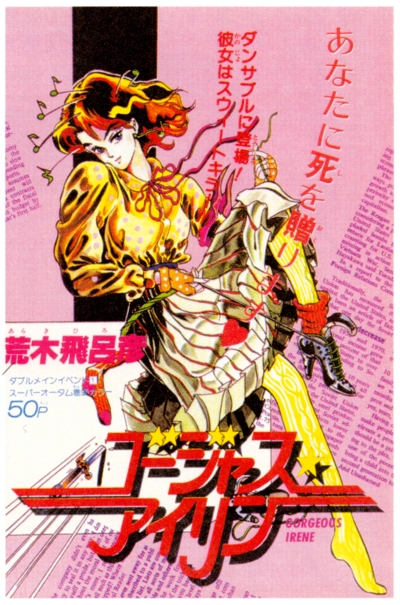 Lauper's Palace (大女の館, Dai Onna no Yakata, lit. "Mansion of the Big Lady") is the first chapter of Gorgeous Irene.

As morning breaks, a young woman puts on her makeup.

A young man is brutally assaulted by a group of female bodyguards for a woman named Lauper. Lauper, holding a chainsaw, accuses the man of hiring an assassin to kill her, which he admits to. After casually killing a cat and wiping the blood on a cloth held by an old lady, Lauper demands to know more about the assassin. The young man describes the assassin as a strange and mysterious girl, and begins recounting how he came across such a person.

Ten days earlier, the young man is driven by a butler to meet Irene Rapona. Irene is a teenage girl with a youthful face and gentle personality, described as a pure and gullible person; for that reason, the butler threatens to kill the young man if he lies to her. Meanwhile, a group of boys convince Irene to eat a flower, poking fun at her gullibility. In their mischief, the boys accidentally fall in a puddle and splash dirt onto Irene, causing her to cry. Just then, the butler arrives and scares off the boys. The young man, having finally met Irene, requests that she commit an assassination.

The butler invites the young man into Irene's home, which is styled after the Rococo fashion of the 17th century. The young man explains that he lives in Swing Town, which is controlled by a gang; Lauper took control of the gang after murdering the former leader, leading to drastic increases in crime and drug proliferation. To curb any threat of assassination, Lauper exclusively employs female slaves as her bodyguards.

Lauper herself is known for her quick temper and cruelty. One time, upon being told by a tailor that he could not procure the materials to make her a dress within the day, she killed the man with a special brand of gum that hardens to become as sharp as a knife. The man's head was then mailed to the house of his friend, an employee of a local newspaper, as a warning. The young man reveals that the tailor had lived in the country for fifty years and was good friends with Irene's parents, in addition to being the young man's own father. Irene accepts the assassination request, only demanding that the young man become her friend, having no family of her own.

Upon hearing the man's story, Lauper laughs at the idea of a woman assassinating her, much less one as sentimental as he described. The young man reveals that when Irene puts her makeup on, her personality changes and becomes deadlier. Just then, the old lady wipes her face with her cloth, revealing herself as a disguised Irene. Putting on her Battle Makeup, Irene sheds her disguise as her killer instinct rises. Lauper's bodyguards fire on Irene, but she seemingly catches all of the bullets. Irene then retaliates by firing fake fingernails at her adversaries, incidentally scratching Lauper's face.

Lauper swings her chainsaw at Irene, who uses her Death Dance to dodge and catch the implement. As Irene is immobilized under the still-active chainsaw, Lauper prepares to kill her with her sharpening gum. However, Irene commands Lauper to cease her movements, and even Lauper is surprised to find her body obeying as her gum slices her arm. Irene's Death Style perfume has allowed her to see through and take control of Lauper's movements with her Heart Magic. For the killing blow, Irene uses her Execution Makeup to hypnotize Lauper into cutting herself in two with her own chainsaw.

In the aftermath of the battle, Irene expresses her sense of betrayal toward the young man for telling her enemy about her, stating that she only let him live out of her promise toward him. As Irene leaves, she reveals that she had loaded the bodyguards' guns with blanks during her service while disguised, keeping the real bullets in her glove.

Author's Note
“
I tend to prefer Irene pre-transformation, especially when she has a dazed look on her face. Look forward to the sequel, everyone!
”
—Hirohiko Araki
“
変身前のアイリンがぼくの好み。特にポーッとしてる所。続編もかくから応援よろしく。
”
—Hirohiko Araki