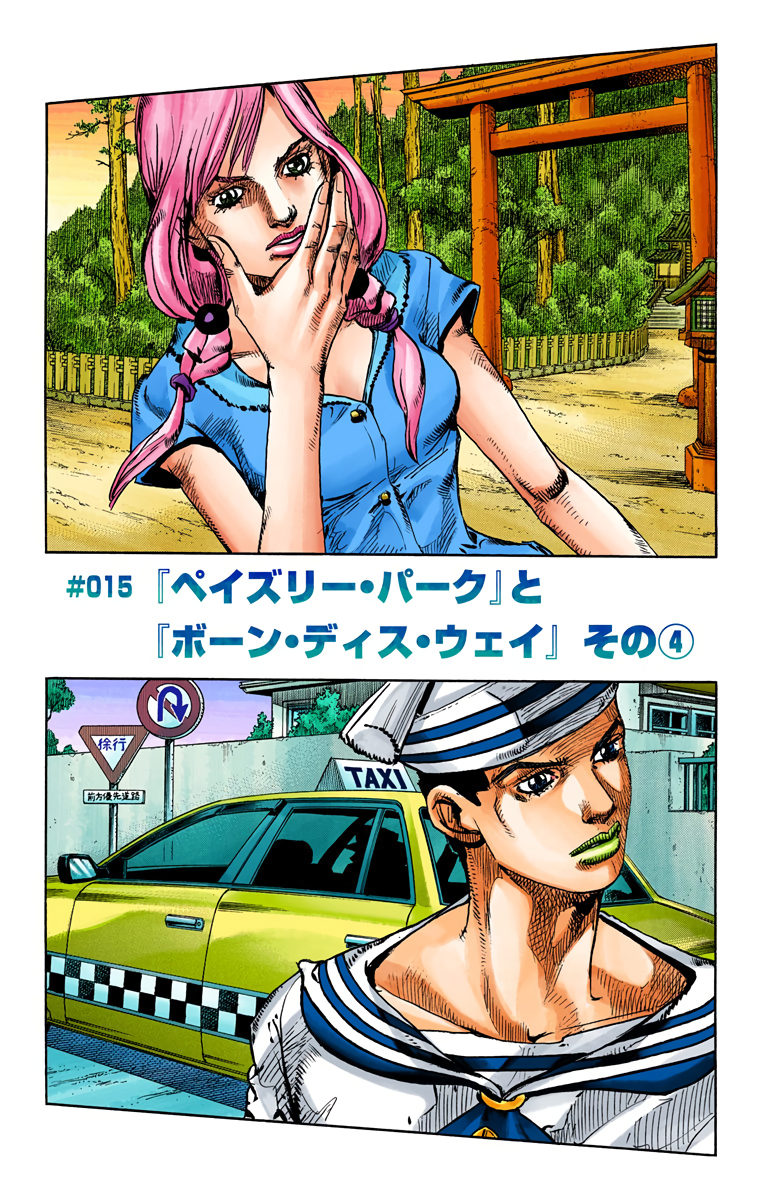 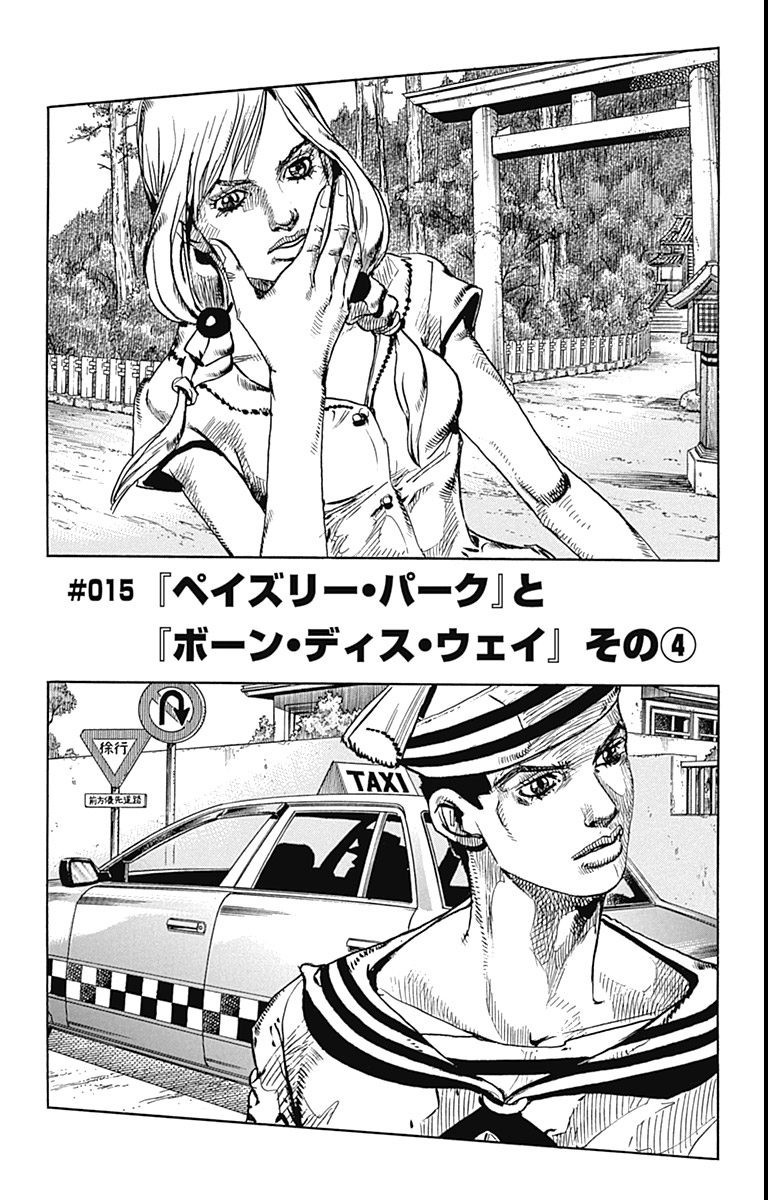 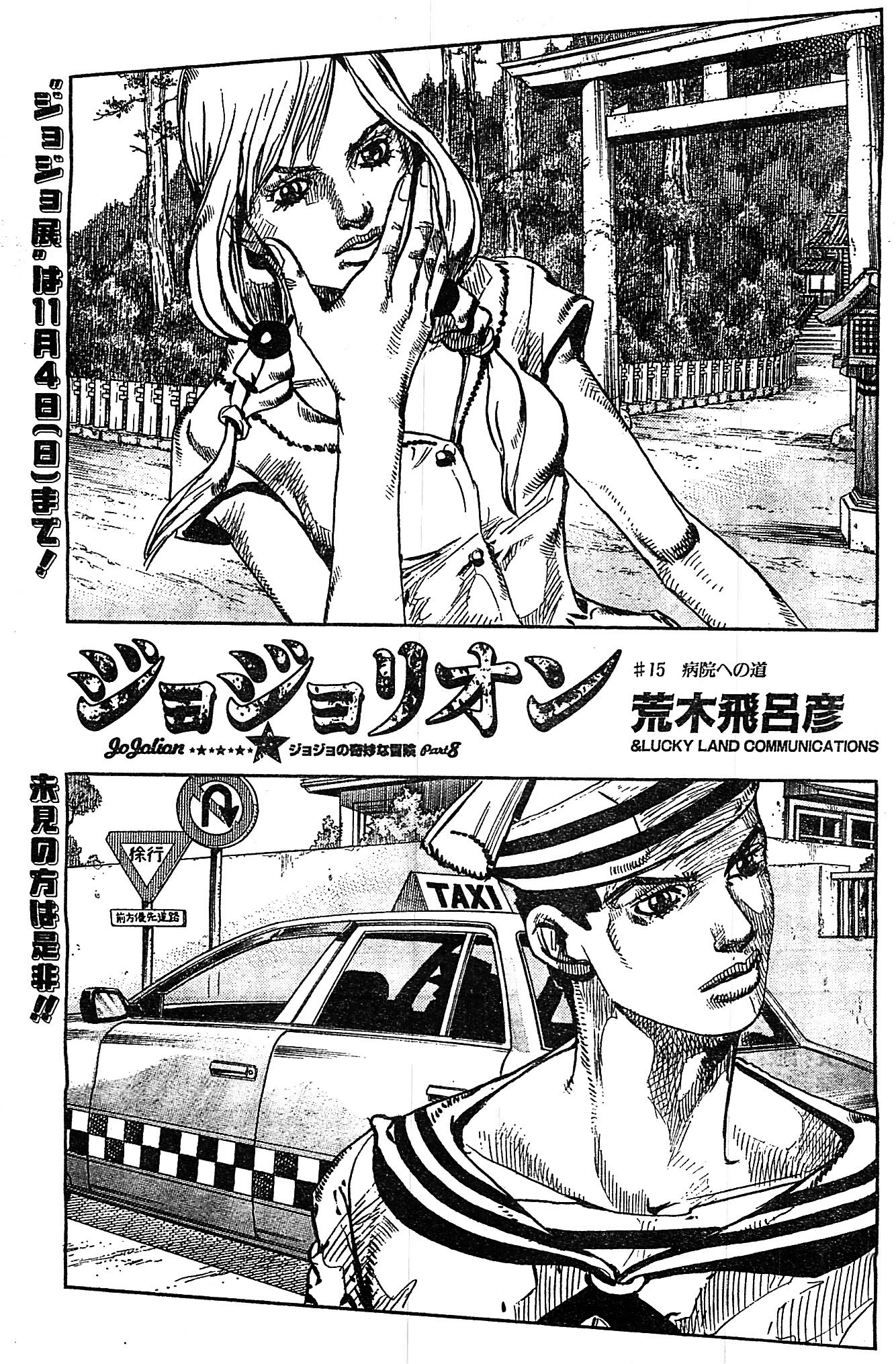 "Paisley Park" and "Born This Way", Part 4 (『ペイズリー・パーク』と『ボーン・ディス・ウェイ』 その④, "Peizurī Pāku" to "Bōn Disu Wei" Sono 4), originally Way to the Hospital (病院への道, Byōin e no Michi) in the UJ release, is the fifteenth chapter of JoJolion and the eight hundred sixty-second chapter of the JoJo's Bizarre Adventure manga.

Whilst escaping Born This Way, Josuke briefly stops at a nearby window and peers inside. He sees a family photo and a small boy perched on the window of the second floor. He experiences a feeling of longing, and questions whether or not he had a family. If he did, would they not be looking for him? He disregards this, and runs towards the back fence of the house. He reaches for the knob to the back fence door, but stops himself realizing that it would probably summon the enemy Stand. Quickly jumping over the fence, he runs towards a man walking down the street. Josuke asks the man for directions to the hospital, to which the man happily obliges by pulling out a map. He tells Josuke to grab the other end of the map to pull it open, but Josuke quickly becomes aggravated and quickly runs away from the man.

Josuke arrives at the hospital, but is unable to go in due to having to open the front door. He decides to wait for someone else to open it, and slowly backs away. He accidentally bumps into a taxi nearby, causing the door to swing open and Born This Way to come driving out. Josuke summons Soft & Wet and pushes against Born This Way in an attempt to keep himself from getting run over. Whilst doing so, the enemy's Stand power kicks in again, and Josuke is forced to endure the blinding hurricane like winds while pushing against the motorcycle. The motorcycle is slowly pushing Josuke, and he realizes that it's attempting to crash him into a nearby wall. Josuke activates Soft & Wet's ability and places a birthmark bubble on his finger. The bubble bursts without any effect, but Josuke follows with Soft & Wet, launching a barrage of strikes at Born This Way. The punches connects with Born This Way's helmet and shatters it. The Stand is temporarily stunned, but continues to drive Josuke towards the wall. Josuke realizes that he is unable to use his bubbles, due to the Stand freezing them before he can use them. What he does realize however, is that the Stand's face is now exposed.