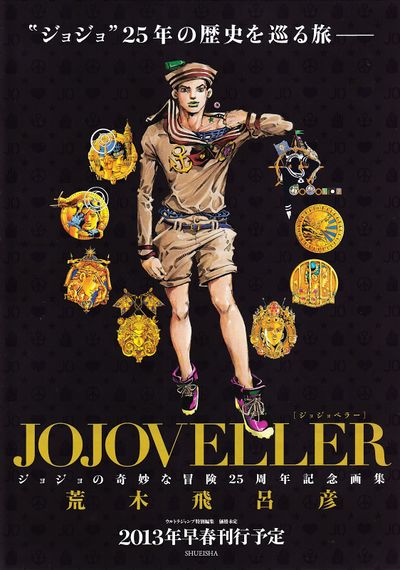 Shueisha
Lucky Land Communications
“
"JOJO's Bizarre Adventure" celebrates its 25th anniversary in 2012. 8 JOJOs have travelled bizarre times and places. This never-ending story is "TO BE CONTINUED".
”
—Incipit of the JOJOVELLER artbook

The set was released on September 19, 2013 and includes an art book featuring original artwork from Stone Ocean to JoJolion, a booklet describing the history of the series, and a Stand encyclopedia containing comments from Araki himself. 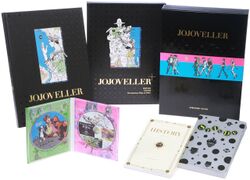 The Limited Edition version of JOJOVELLER

The package includes three separate books, each with their own art and information. The limited-edition comes in a black Lacquered enamel case and includes 2 Blu-Ray Discs showing the 25th-anniversary art exhibition in Tokyo and a behind-the-scenes look at Araki's creative process.

A Complete Stand Guide similar to the one in JOJO A-GO!GO! updated with Stands from Stone Ocean to the early part of JoJolion. 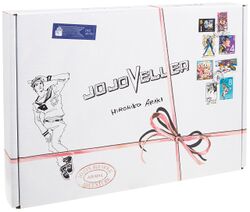 The Actual JOJOVELLER artbook. It features works of art from JoJo's Bizarre Adventure and some of Araki's most recent illustrations. It is divided into the following chapters: 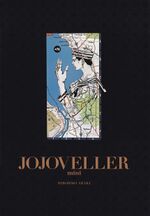 A JOJOVELLER mini booklet was included with the April 2014 issue of Ultra Jump. It features several pieces of artwork from the main JOJOVELLER book. It was also released alongside a supplement Stand guide called STANDS plus, which included pages on Nut King Call and Paper Moon King (until then known as "Paper Moon"), who were introduced in the manga following the publication of JOJOVELLER.

The JOJOVELLER artbook was printed with five types of colored ink instead of the usual four, enhancing the quality of the color rendition.[2]