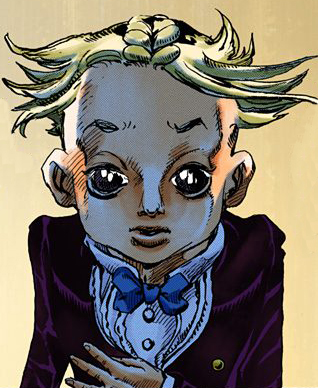 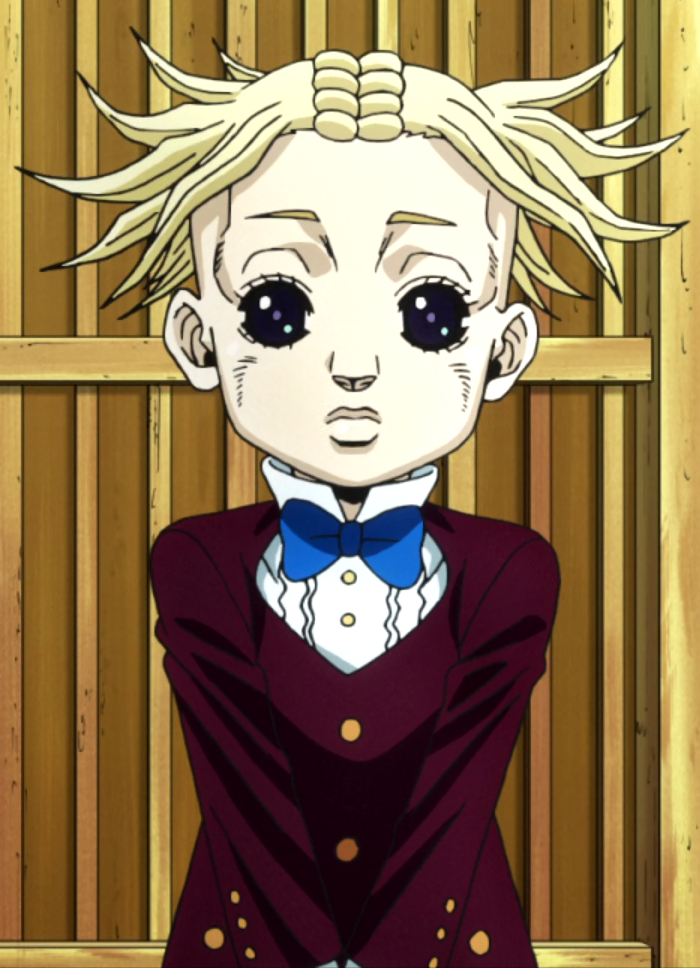 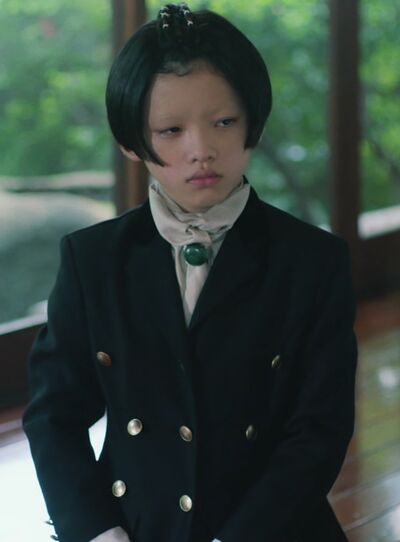 God of the Mountain (servant)

TSKR Episode 5
Episode 5: Millionaire Village
“
Greetings. I welcome you, honored guests from afar. We have been graciously blessed with good weather on this day.
”
—Ikkyu welcomes Rohan and Izumi

Ikkyu (一究, Ikkyū) is the main antagonist of the one-shot Thus Spoke Kishibe Rohan - Episode 5: Millionaire Village. He is a boy working as a butler in the Millionaire Village and welcomes Rohan and Izumi when they arrive to buy a mansion.

Ikkyu is a small child with a somewhat oversized head and large, globular eyes. He has unkempt hair with a braid forming a crest on the top of his head.

Ikkyu wears a dark bulter uniform with a bow tie and a checkered pants.

In the TV Drama, Ikkyu's appearance is altered. He lacks his more otherworldly features such as his distinctive eyes, and is portrayed as an ordinary, albeit creepy boy. Ikkyu retains his braid, but now has a bob cut rather than unkempt locks. His eyebrows are painted white, reminiscent of the Hikimayu tradition.

Ikkyu wears a black blouse covered in gold buttons over a white shirt and a white tie decorated with a green brooch. He also wears red pants and purple velvet socks.

“
One's manners are either proper or improper. There is no room for compromise.
”
—Ikkyu

Ikkyu is dedicated to serving his masters and showing impeccable manners. He doesn't show any emotions and doesn't show concern when seeing people suffer for their bad manners, as "there is no compromise when it comes to manners", even though his facial expressions show otherwise.

For unknown reasons, he also is capable of staying awake after being affected by Heaven's Door and is aware of what happened to him without any prior knowledge about Stands.

In the TV Drama, Ikkyu's character is noticeably more unhinged. He is somewhat more vicious as he is shown to enjoy seeing the distress of his guests after they lose what is dearest to them. Plus, he actually sets up a test to make Rohan fail, indirectly exhibiting some cunning and malevolence. He is also shown actually losing his cool and slapping the floor in frustration after Rohan definitely beats him at his own game.

Ikkyu is the butler working for The Gods of the Mountain in the Village of Millionaires. He watches the residents of the village to see if they have good manners or not, as the place is under a certain curse where those who show manners gain something and become rich, while those who don't lose something precious to them, such as a friend or family member. When his master decides to sell another house, Ikkyu greets customers Rohan Kishibe and Kyoka Izumi at the front door of the gates. Ikkyu escorts them from the main entrance to his master's house and leaves them with some tea in one of the rooms and waits patiently, just out of the room.

Ikkyu thus watches his guests behind a curtain with his master. Rohan suspects this to be a test to see if they can drink the tea in a proper fashion to display proper manners. Rohan states that its better to wait, but Izumi decides to drinks the tea as best she can.

Ikkyu appears almost immediately after she barely sips the tea and asks them to leave. He mentions that Izumi has already breached three rules of good manners and the land will not be sold to rude people. Izumi is confused, but Ikkyu goes on to explain that the first rule broken was that as guests, they should have not shamelessly sat in the "seats of honor," which are located across the entrance. Until the host arrives, the proper thing to do was to wait in the lower seats facing the other wall. The second rule broken was that they should have not stepped on the edges of tatami mats of a Japanese-style room. Finally, the third rule was that, while it is proper to drink while holding a saucer when one's knees are higher than the height of the table, it is unrefined to hold the teacup by placing the fingers through the handle. With the explanation over, Ikkyu asks for them to leave again.

Izumi begs Ikkyu for another try at displaying good manners, to which the butler complies and goes to relay this request to the master. Rohan suddenly realizes a baby bird he found earlier and kept in his pocket had died, while Izumi receives a phone call and learns her mom and fiancee were in a car crash together and died. Ikkyu returns and says the owner has allowed Izumi to retry the test of manners, but Rohan disregards this and quickly uses Heaven's Door on the butler, discovering the curse behind the village. Ikkyu, different from other non-stand users who had fallen victim for Heaven's Door, maintains consciousness and faces Rohan with his face still turned into a book. Ikkyu claims that Rohan broke another rule by turning him into a book without his permission, and thus Izumi suddenly starts having a heart attack.

Rohan begs the butler to forgive her, but he says there is no compromise when it comes to manners. Rohan is suddenly teleported in front of a table with a plate of corn along with various utensils. Ikkyu asks Rohan how he would go about eating the corn; Rohan states that using utensils would be too obvious a trap and the most logical way would to eat it with his hands. Rohan also points out that butler had also broken a rule and was standing at the edge of a tatami mat. Earlier when using Heaven's Door, Rohan had written commands into the butler, making it so he could no longer see the edges of tatami mats. Rohan claims victory and asks for Izumi's things to be returned to her.

Ikkyu says that Rohan had cheated, and that cheating would incur the wrath of the gods. He asks Rohan again if he would like to try again to show proper manners. Rohan declines the offer, and states that he is leaving and is never coming back. He carries Izumi outside of the villa and notices the baby bird returned to a healthy state.[1]