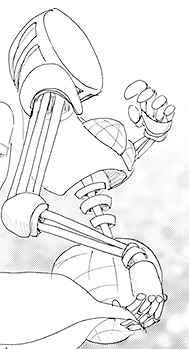 Face/Off (フェイスオフ, Feisu Ofu) is the Stand of Aya Tsuji from the 37th universe, featured in the light novel JORGE JOESTAR. It resembles a mannequin and can switch faces and fingerprints.

Face/Off resembles Cinderella but with some minor differences. It is a feminine humanoid Stand with no face, no legs, and thin mechanical arms with gaps in between. Its head is cylindrical and resembles a fog lamp, with the inner portion being blank. It has pronounced breasts while wearing a top resembling a bra. It also has a thin waist with three rings around it and connects to a large sphere for its lower body.

Face/Off's abilities appear to be the same as Cinderella's.

Face/Off can switch the faces and fingerprints of any two people.[1] Yoshikage Kira (Universe 37) has Aya use this ability on him to swap places with Chien Kunimido.[2]