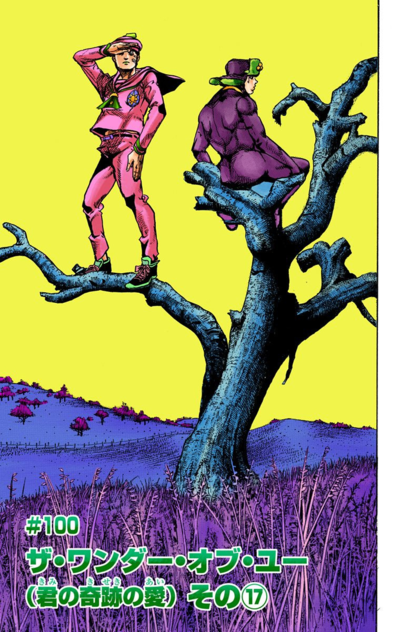 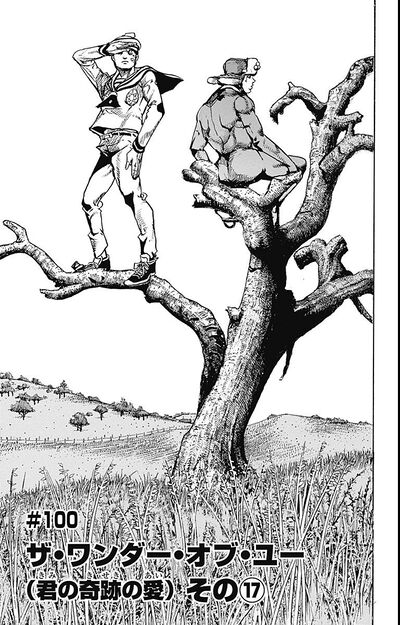 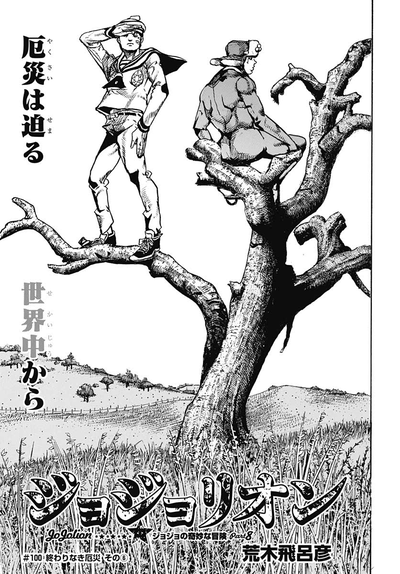 The battle between Josuke, Rai Mamezuku, Dododo De Dadada and Wonder of U continues. Because of Dododo De Dadada's ability, asbestos is gushing out of Mamezuku and Josuke's orifices the moment they expand their limbs. Although he has the advantage, Wonder of U still suspects that Josuke is hiding something. Mamezuku warns Josuke that the Rock Insect is climbing onto the desk, prompting Josuke to sweep everything that's on the table to uncover it. However, Dododo De Dadada has actually hidden beneath the desk and swings another stick into Josuke, cutting his neck.

Josuke cannot catch the attack and despite Mamezuku's warnings, the Rock Insect keeps eluding him. Worse, more asbestos comes out of Mamezuku. When Dododo De Dadada attacks again, Josuke manages to catch the stick with his hand and stands up. As Wonder of U notes the gambit, Josuke has Soft & Wet pummel the desk while protecting its fists with the bubbles to reach Dododo De Dadada. Mamezuku tears the asbestos off his eyes, enabling him to see that Dododo De Dadada has already gotten away and is preparing an attack from behind Josuke. He warns Josuke, but it seems that Josuke's tactic has failed. As Wonder of U notes, he's just stood up and extended his legs and has been stung four times. So much asbestos is coming out of Josuke that Wonder of U predicts that his eyes will stop working soon. Dododo De Dadada's crane comes down from the ceiling and the string is already around Josuke's neck; the Rock Insect is about to clog up Josuke's throat with asbestos.

Suddenly, Wonder of U realizes that Mamezuku is clinging onto the ceiling, half-turned into wires. Crawling on the ceiling like a snake, Mamezuku is able to extend his finger into a wire and cut down Dododo De Dadada, killing the Rock Insect. With that threat disposed of, Mamezuku turns his attention to Wonder of U while Josuke recovers. Threatening the enemy Stand with his finger, Mamezuku notes that he's a mere 2 centimeters away from it and wonders how any calamity would stop him. As he approaches the tip of his wire into Wonder of U's face, Mamezuku begins to claim that the Stand's power of calamity could be a trick. Josuke wants Wonder of U to attack him instead. Wonder of U openly wonders what could happen as nobody has ever gotten this close to it but declares that still nobody can attack him. Then, Wonder of U presses on Mamezuku's past, reminding him of the time his father died, how a mysterious insect laid waste to the Mamezuku family's orchard, and how Mamezuku's mother fell ill and died as she was overwhelmed with all the calamities that had happened. Angered by Wonder of U's taunt, Mamezuku directly grabs the Stand by the neck and threatens to impale it with his fingertip.

Suddenly, one of Mamezuku's braids flies off. Mamezuku narrowly missed Satoru Akefu's neck and spherical chunks of flesh has been taken off his shoulder. Josuke sees that his own soap bubbles were responsible for wounding Mamezuku. Wonder of U thus realizes that this was Josuke's trap: Josuke had laid several bubbles in the room but some of them were hidden and spinning at high speed. By letting Wonder of U come to him, Josuke had hoped to let these trapped bubbles kill the enemy Stand but instead, by calamity, these bubbles wounded Mamezuku instead. Worse, one of those bubbles just pierced through Mamezuku's head.

As Mamezuku collapses, Wonder of U's confidence in its invincibility is reassured. However, Mamezuku is not dead yet and declares that this fight is not over. Mamezuku then declares that it wasn't a calamity that hit him, but rather good fortune. He goes on to explain that this "good fortune" is a phenomenon separate from a calamity hidden in Stands, but no one is aware of it. Letting a bit of wire go down his finger, Mamezuku begins to twirl the rope around and explains to Josuke that his soap bubbles are not what he thinks: they're soft spinning lines.

Opening his chest to reveal a large hole, Mamezuku restates that all there is to the bubbles is their rotation, and within them lies something unseen.