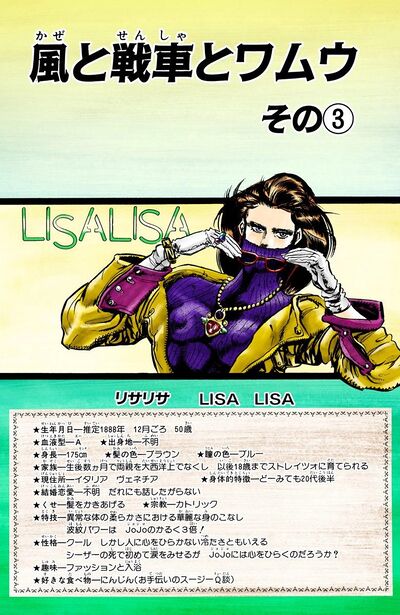 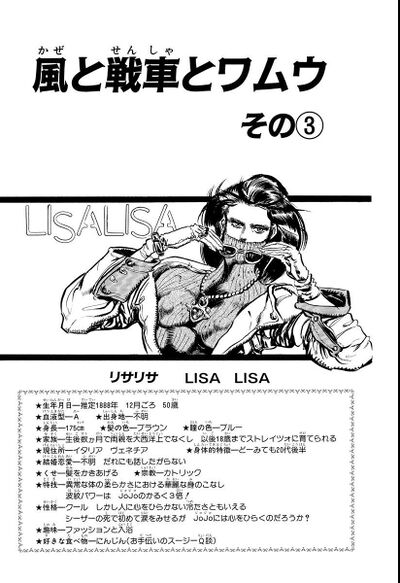 The Wind, the Chariot, and Wamuu, Part 3 (風と戦車とワムウ その③, Kaze to Sensha to Wamū Sono 3), originally Furious Struggle from Ancient Times (荒ぶる古の戦, Araburu Inishie no Ikusa) in the WSJ and tankobon releases, is the fifty-third chapter of Battle Tendency and the ninety-seventh chapter of the JoJo's Bizarre Adventure manga.

Lisa Lisa was the baby rescued by Erina, making her fifty years old. Erina was already pregnant with George Joestar II, so she gave the baby to Straizo to be its caretaker. He was the one to train her in the Ripple, along with giving her the Red Stone of Aja. Before Lisa Lisa can end her conversation with Joseph, they are interrupted by the thundering noise of Vampire Horses. Kars reveals that the method of battle for Joseph and Wamuu will be a chariot race. The two warriors prepare for their fight. JoJo reveals to Wamuu that he has yet to drink the antidote, stating that he will do so once Wamuu is defeated. Joseph then proceeds to put on Caesar's Headband and mounts his chariot.