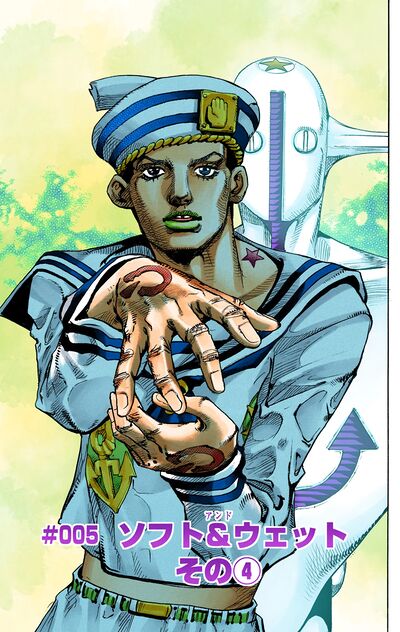 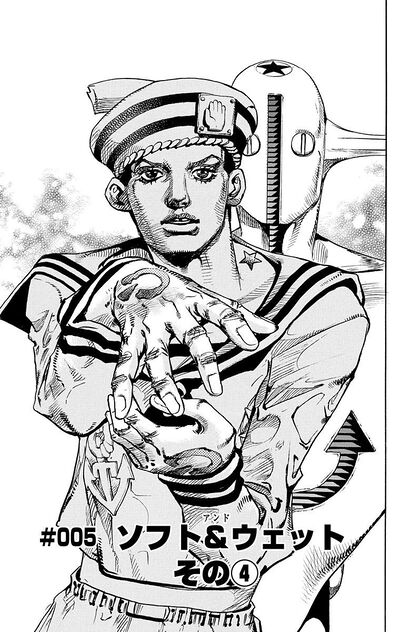 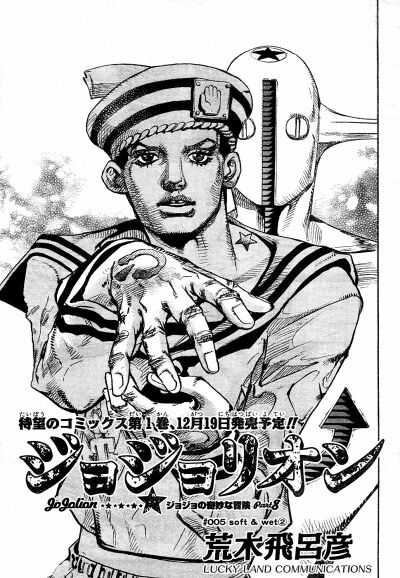 Trying to escape the enemy attack and defeat him at the same time, the man runs toward the balcony, leaping through the glass shutters in order to escape the ability of his opponent. He spots a hacksaw at one point, but ignores it.

The foe lowers down snakes from the balcony above in order to detect the location of the man. The protagonist tries to avoid them, but gets bitten on his right foot, his last uninjured and unmarked limb. He is now succumbing to the poison he is unable to remove because of his Stand's limitations.

Then he suddenly receives a vision of a face he believes he knows. It was a very brief moment, but he wonders who it could be.

She has been constantly used by people in her life, such as her parents and a boy she liked and even the people she met during her vacation, and when she's not needed anymore she's just thrown away; throughout her life, she's been treated like an object used for someone's convenience. She proceeds to tell the protagonist that she doesn't want to simply die, and that she doesn't want to just get killed. She decides to answer the phone.

She makes a deal with her attacker, asking him to spare her life. She then tells the protagonist's location on the couch.

Immediately, the protagonist's last unmarked limb becomes marked, and all four of his limbs begin to act on themselves. He struggles with his attacker's control as he is forced into grabbing the hacksaw from before and cutting his own head off with it. Watching this and now freed of her marks and the attacker's control, the naked woman tells the protagonist that he's the one at fault and not her, because he was the one in the town she got kidnapped in. She turns away to leave him to die, but is intervened by Yasuho, who returned.

Yasuho is surprised at the sight of the protagonist cutting his own head off. While he's urging Yasuho to get out of the apartment, he's manipulated into throwing the hacksaw at her, cutting and branding her right hand.