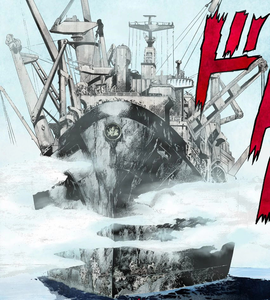 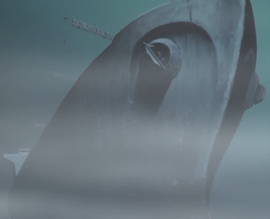 Strength (ストレングス（力）, Sutorengusu) is the Stand of Forever the Orangutan, featured in the third part of the JoJo's Bizarre Adventure series, Stardust Crusaders.

As a Materialized, it possesses the ability to bind itself to a boat and transform it into a massive Freighter

. Its user is then capable of manipulating the ship at will.

,[1] Strength is a Stand bound to a small yacht, which is then transformed into a gigantic derelict freighter named "Big Daddy".[2] As a massive ocean liner, it is the largest Stand ever seen.

It has absolutely no will since Forever has absolute control over it. It represents the Tarot Card Strength

, which symbolizes a challenge to fight, a strong will and hidden potential.[3]

Disguised as a freighter, Strength is a very powerful Stand bound to take its enemies by surprise and it almost killed the entirety of the Joestar Group at once.