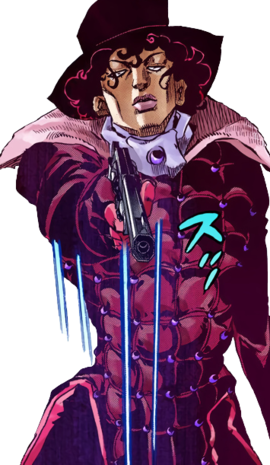 Magent is a slender man of above-average height and dark curly hair. Outside a bolero hat, his attire generally consists of what appears to be a thick quilted stud jacket, accompanied by long sleeves, finger-less gloves, a fur collar and a single stud-embedded cravat.

Because his Stand is entirely defensive in nature, Magent Magent carries firearms with him. Against Johnny and Gyro, he wields a shotgun, was shown to used a pistol with a silencer for quiet assassinations and was seen wearing an explosive belt.

Magent likes silly jokes such as mock-crying with ice shards

Wekapipo is dispatched alongside Magent Magent. The two stand guard in a vantage point overlooking the frozen strait between Lake Michigan and Lake Superior. Magent tries to converse, mentioning the newly invented airplanes and then attempts a joke. However, Wekapipo doesn't let himself be distracted by Magent's antics and his gloom frustrates Magent. Knowing about a wolf who's the host of the new Corpse Part, Wekapipo and Magent wait for Johnny Joestar and Gyro Zeppeli to appear. Wekapipo advises Magent not to take the Spin lightly. The pair see Johnny and Gyro and approache to attack. Wekapipo throws his Steel Ball. Gyro throws his own Steel Ball to stop it, but Wekapipo's Ball shoots the small beads embedded on it at the duo. The left side ataxia sets in for Johnny and Gyro; Magent Magent goes to their left on his sled and tries to shoot, but Johnny turns to the right until he sees Magent and shoots him. Magent shoots thus unveils his Stand 20th Century Boy, which makes him invulnerable as long as he's sitting or kneeling. Gyro also throws a Steel Ball but Magent remains impervious to the Spin. Moreover, Gyro's left hand is wounded because of Magent's shots. Wekapipo notices the wolf and throws two Balls at Gyro. When Gyro tries to counter them, his Balls are pushed aside and Gyro understands Wekapipo's strategy. By attacking them on the water and attacking his hands, Wekapipo has isolated Gyro in a battlefield where he cannot closely observe nature to create a perfect Spin, thus depowering him greatly. 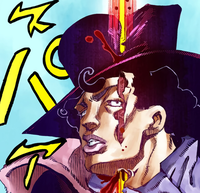 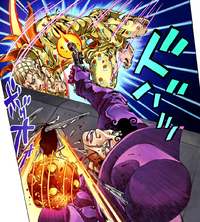 To find Lucy, Magent seeks Steel in his coach and hands him a ruler. Because of his lost eye, Magent as trouble perceiving perspective and he uses this trick to shoot better, hitting Steel in the chest with two bullets. However, Wekapipo arrives on the scene. When Wekapipo finds Steel in his coach, the old man has been shot. Magent tries to ambush Wekapipo, hidden on the coach and tries to shoot. However, the horses are startled and Wekapipo sees Magent's shadow. Magent shoots and Wekapipo throws a Wrecking Ball through the roof, grazing each other. The satellites fly towards Magent, who protects himself with 20th Century Boy. Magent sneakily lights up his belt of dynamite sticks. With Magent immobilized, Wekapipo climbs on the coach whose horses start to gallop. Wekapipo tries to stab Magent in the face with a knife, but it breaks. He then tries to smash his head with a direct throw to the skull but 20th Century Boy makes Magent invulnerable. 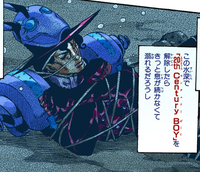