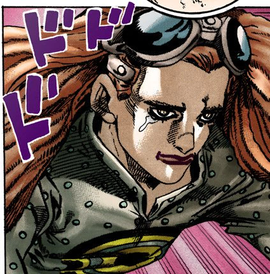 L.A. is a young man with long flowing hair, and shadowed eyes. He wears the same dotted suit as his family with a target imprinted on the chest and wears goggles on his head.

L.A. is shown to have low academic skills, for instance being unable to do basic math. Along with being prone to uncontrollable emotional outbursts, he is also extremely naive, believing that his mother was a stork because Andre told him so.

He is generally emotionally dependant on his father and brother. Likewise, he looks up to his brother like a young child would. Despite the constant verbal abuse from both, L.A. doesn't mind their insults, and is attached to them, becoming furious when his father dies.

Compared to the other members of his family, he seems to be of lower intelligence, but has sudden moments of keen observation which are only met with his family's scorn. For this, Benjamin calls him 'the family's smartass'.

Gyro's feet is invaded by steel and the duo realizes that they are dealing with enemies that are assassinating the competition. They realize that the Boomboom's ability is a magnetic power when Johnny's pistol is disassembled and the pieces are attracted to Gyro's feet. Benjamin Boomboom, the patriarch, destroys an incoming Steel Ball aimed at him with his magnetism. Andre's knife flies towards Gyro's neck but he blocks it. Circling the duo, Andre shows off some tricks that impress L.A. but refuses to reveal their secrets. Furious at Gyro for almost letting him die, Andre is the first to charge closer to Gyro. Gyro throws his remaining ball at a rock, making a piece of rock shoot through Andre. Seeing the Boomboom Family circle around them, Gyro understands that the magnetism is tied to his proximity to them and thus, the duo flees. As they move away from the Boomboom, the magnetisms weakens but Benjamin shoots through the hole in Andre, splashing some of Andre's blood on Johnny. 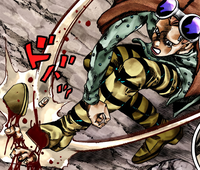