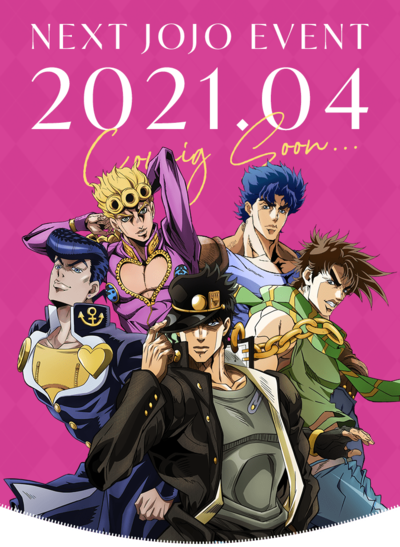 As an overall celebration of the JoJo's Bizarre Adventure anime, 'JOESTAR The Inherited Soul' was an exclusive event that featured the voice actors of each of the JoJo protagonists thus far. This includes Kazuyuki Okitsu, Tomokazu Sugita, Daisuke Ono, Yuki Ono, and Kensho Ono.[2]

To serve as a countdown prior to the event, a web radio program named JOESTAR RADIO was released every week starting from November 8, 2020. The podcast featured voice actors from each season of the JoJo's Bizarre Adventure TV anime.

JOESTAR The Inherited Soul was hosted by Chiaki Matsuzawa. The event began with commercials of upcoming Super Action Statues, Nendoroid, and other merchandise. Next, they discussed data related to the anime's production.

The voice actors talked about their time with other cast members. They watched their character's best scenes which fans voted for and then did a live dubbing of the top voted scene.

In the end, Fairouz Ai came on stage and revealed that she is voicing Jolyne Cujoh in the upcoming JoJo's Bizarre Adventure: Stone Ocean anime adaptation. A prerecorded video message from Hirohiko Araki regarding Part 6's anime adaptation was displayed.

To conclude the event, TOMMY arrived on stage and sang the first opening of the anime series, JoJo ~Sono Chi no Sadame~.