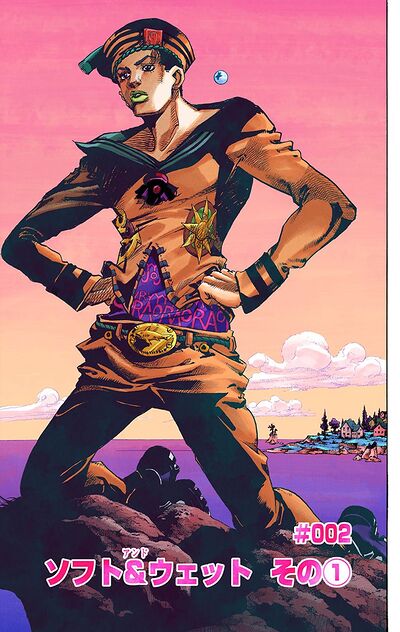 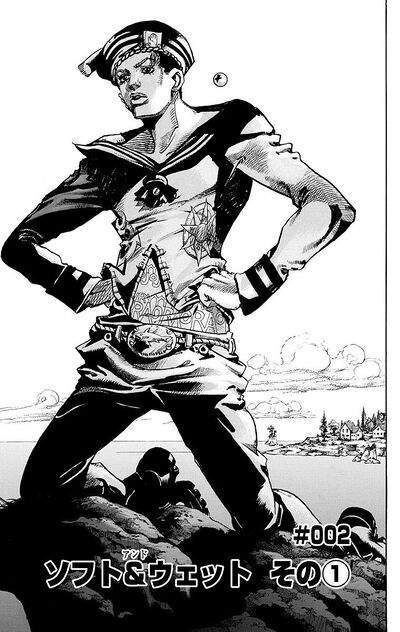 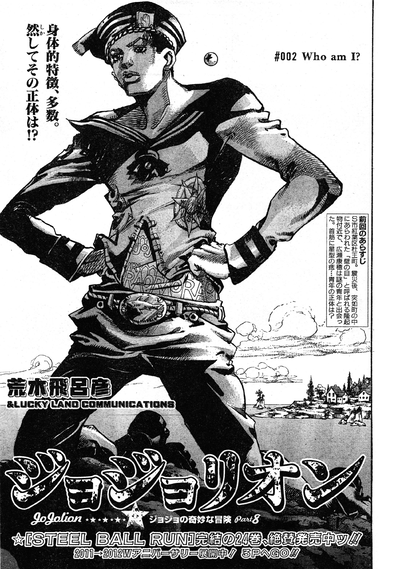 Soft & Wet, Part 1 (ソフトウェット その①, Sofuto ando Wetto Sono 1), originally Who Am I? (Who am I?) in the UJ release, is the second chapter of JoJolion and the eight hundred forty-ninth chapter of the JoJo's Bizarre Adventure manga.

Yasuho finally asks him to tell her the earliest memory he can find; the man replies that Yasuho is his earliest memory, hugging her. He does not know anyone else in the world. Feeling his erection and remembering his four testicles, she pushes him away. Then she notices the man's sailor hat and asks him where he got it from, and then notices the label inside is from a store that she is familiar with. Yasuho then begins to think of a plan for her to take a picture of the hat and ask the shopkeeper about it herself since the man is unable to leave his hospital room. However, the man uses his shoulder to launch a bubble with a star shape on it toward a security guard standing near his room. It pops and causes all the water in her to drain out; she becomes thirsty and leaves to get a drink. The two use this chance to exit the hospital. From the window of his hospital room, Joshu sees them escaping. He claims that Yasuho likes him more than the strange man, since Joshu got sixteen dumplings while the man only got eight. He passes out as a bite mark can be seen on his body.

At the store, they ask the clerk if he knew who bought the man's hat. The clerk is confused, claiming that he was the one who came and bought it. The clerk brings out a book containing past sales, and says that his name appears to be "Yoshikage Kira". He also produces an address of where he supposedly lives.

Author's Note
“
It's been a while since I've worked with Mr. Kabashima, my first editor. He was in charge of the new book, "Bizarre Horror Movie Analysis".
”
—Hirohiko Araki
“
新書の〔奇妙なホラー映画論〕、初代担当・椛島氏との久々のお仕事でした。
”
—Hirohiko Araki