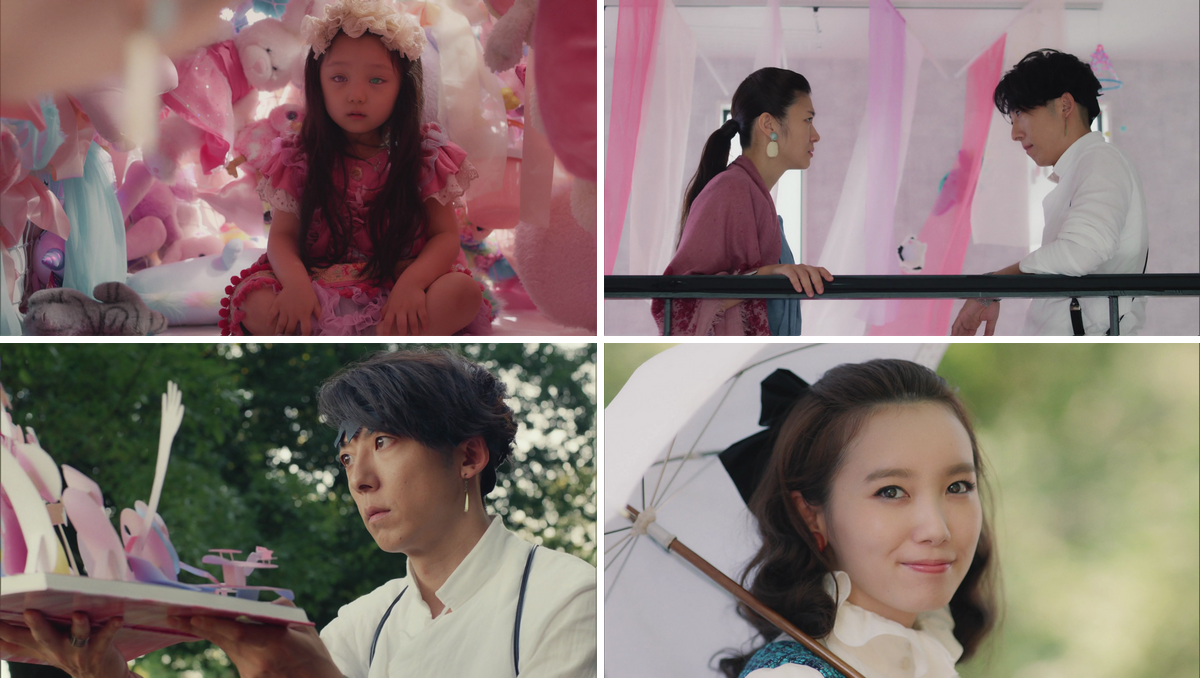 In this episode, Rohan Kishibe meets Mai Katahira and her strange daughter Mao. 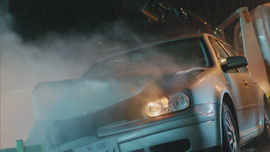 A terrible car accident in the past

The story begins with a new couple sitting in a car. The woman calls out her partner on his weird mannerism of scratching his head with his pinky, but the man jokingly replies that she too has a habit of wrinkling her eyebrows when she frowns. The man, named Akira, offers his canned coffee and tries to reassure his wife Mai and tell her that everything will be okay. However, it is revealed that they just had a car accident. 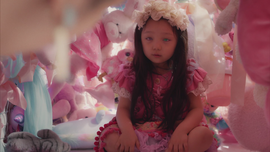 The alarm of an ambulance suddenly wakes up Mai. It is now six years after the accident in which she's lost her husband, and she's dreamed about it, which upsets her. Mai goes to the second floor and opens a curtain to her child's room. She calls her daughter Mao and opens Mao's tent of plushies. It is shown that Mao has heterochromia. Mao strangely says "Ytsriht m'I." (たいわかどの, Taiwaka Dono). It takes a moment for the mother to understand that Mao is saying, "I'm thirsty." 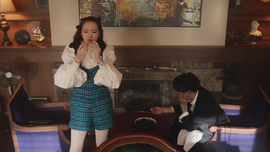 Kyoka and Rohan discuss his next one-shot

Taro is seen sitting at the park before the story jumps to Rohan in his office throwing dice in a bowl while Kyoka Izumi watches. Rohan rolls the number 1 on all three dice before obtaining a 4-4-4, impressing Kyoka since the odds of rolling two consecutive triples are so low. She calls it a miracle, but Rohan argues that this merely has a one-in-a-thousand chance of happening and that miracles are impossible by definition. Kyoka asks Rohan to listen to her ideas for a one-shot, but Rohan already has a theme: "What entails a real miracle?" Kyoka insists, but Rohan guesses that Kyoka wants to use Taro as an inspiration since he survived a terrible accident and even survived through a temporary cardiac arrest. Rohan refuses because he thinks plots about amnesia are all the same. However, Kyoka mentions that Rohan can use "hypnosis," referring to how he had managed to free Jugo Shishi of the curse of "kushagara" with Heaven's Door. She wants Rohan to use his hypnotherapy to cure Taro, but Rohan has had enough of her and throws her out of his house again. 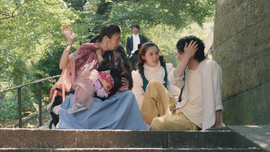 Taro, Kyoka, Rohan, Mai and Mao meet each other

Meanwhile, Mai (whose last name is revealed as "Katahira") brings Mao out on a stroller, making sure that the folded cover hides her from the sun. When Mao points the way to the park, Mai hurriedly hides her hand. At the same time, Kyoka meets Taro at a café, and she complains about Rohan's refusal. Taro thanks her for caring for him despite being busy, but Kyoka says that she actually has a lot of free time. Kyoka wants Taro to resume his photography, but he isn't sure about what he wants to shoot. Nonetheless, Taro has brought his camera after listening to Kyoka's previous words. Mai reaches a set of stairs and must fold the stroller. She thus tells Mao to step out and stay in the shadow before proceeding to carry her. Incidentally, Kyoka and Taro cross paths with Rohan at the same place. Kyoka asks Rohan to try his hypnosis on Taro, to Rohan's exasperation. While Rohan and his editor argue, Mai passes near Taro, and Mao pulls Taro's shirt, saying "Hello" in reverse to him. Unfortunately, the tug makes Taro fall and bump his head on a wall. While everyone else goes to a hospital to have Taro treated, Rohan is intrigued by Mao's eyes. 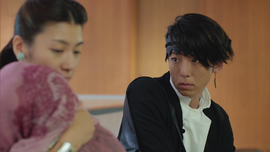 Rohan takes an interest in Mao

Rohan decides to follow Mai and Kyoka. At the hospital, Kyoka and Mai learn that Taro's injury is fortunately not serious. When Rohan arrives, he inquires about Mai's daughter, but Mai keeps Mao hidden underneath her shawl. Kyoka intervenes and calls out Rohan for his rudeness. Kyoka recognizes Mai as a famous interior decorator she admires and who published a book at Shumeisha. Kyoka formally introduces Rohan but claims that he is a hypnotherapist, which actually interests Mai, although she doesn't say anything further. Taro returns and is thankfully well but must undergo further testing. He explains what happened to him to Mai. When Mao grabs his arm again, Mai is embarrassed and goes away as quickly as she can. Taro is brought back into his hospital room for further examinations. Rohan and Kyoka are intrigued by Mai's nervousness. 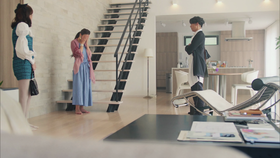 Mai explains her tragic story and fears about Mao to Rohan

At Mai's apartment, she scolds Mao for her "dangerous" actions, seemingly upsetting the little girl. Mao quickly runs inside of her plush tent. Mai is suddenly startled by the sound of a car braking. Back at the hospital, Rohan is intrigued by Taro's affinity with Mao. He asks Kyoka if Taro could have taken photos for Mai, but Kyoka debunks his theory since Taro used to specialize in exterior photos while Mai is an interior decorator. Kyoka also states that Mai's book was, in fact, published while Taro was hospitalized. Kyoka had met Taro last year and has been helping him get back to taking photos since. Rohan takes a definitive interest in Mai and decides to find her, using Kyoka's connections at Shumeisha to find her address. Rohan goes to Mai Katahira's home and abruptly enters her apartment. Mai is reluctant to let Rohan approach Mao, but Rohan asks her why she was so interested in Rohan's "hypnosis" abilities. Seeing Mai being disturbed, he pushes his interrogation further and asks what she is afraid of. Shaken, Mai decides to accept Rohan's "help." She brings Rohan and Kyoka to Mao's plush tent and lists her quirks, notably how she likes to cover herself under something ever since she was a baby. She reveals that her former husband had died in an accident six years ago and that she was pregnant with Mao at the time. Despite her love for her daughter, Mai fears that Mao is somehow the one who keeps causing accidents near her. Adding that her parents also died in an accident, Mai wonders if some sort of bad fate is being passed down through genetics from generation to generation. 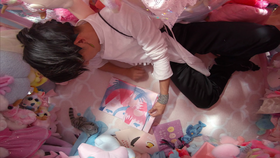 Rohan reads Mao's bio but doesn't find any anomaly. She is simply the way she is.

Mai finally allows Rohan to examine Mao in the hope that she can live a normal life. Inside her tent, Rohan meets Mao and turns her into a book. He flips through the pages covered in spots of pink and blue, with recurring motifs of arms reaching out. When Rohan is done, Mao exits the tent and plays in a corner. Disappointed, Rohan concludes that there is nothing wrong with Mao. Her appearance comes down to genetics, and her quirks of character are just her personality. Mai wants Mao to be made normal, but Rohan calls her out about her definition of normality and declares that Mao was born the way she is and that it is "normal." Mai says that she will be bullied, but Rohan shrugs it off. While Mai wants a second examination, Rohan wants to leave. Mao becomes upset when Mai tries to take her and then runs away and disappears in front of Rohan and Kyoka's eyes, shocking them. Rohan discovers that Mao has a gift like him and theorizes that she can create illusions and camouflage herself. Mai searches for Mao in the apartment, and Rohan reveals that he knows that Mai's obsession with hiding Mao is the cause of this ability. Suddenly, Mao opens the front door. The three realize she's gone out, but they lose her trail. Rohan thinks for a moment, and then they decide to go to the hospital. However, neither Mao nor Taro are present. Rohan asks if Mao knows Taro but Mai states it was the first time that Mao approached anyone. Kyoka makes a connection: Mai's accident and Taro's accident happened six years ago. Kyoka reveals that Taro received organs from an unknown donor, and Mai also reveals that her husband was a registered organ donor. 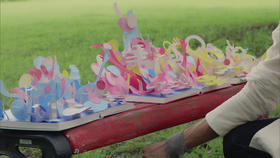 Rohan makes the connection between Taro, Mao, and Mai

At the park, Taro is sitting on a bench and tries his camera. Mao then appears to him and greets him. Taro quickly understands Mao, and they bond with each other. When Rohan, Kyoka, and Mai arrive at the park, Mai hears Mao laughing and is relieved when she sees Taro playing with Mao in the playground. Taro is also unusually lively and happy with the little girl. Likewise, Mai is awed that her girl is now smiling and laughing. Taro meets Mai and asks for Mao's name. At the same time, Mao runs off and is almost run over by a car. Thankfully, Rohan manages to catch up to Mao and lifts her out of harm's way due to his athleticism. Curious, Rohan turns everyone into books. Tossing Kyoka (turned into a magazine) out of the way, Rohan reads Taro and learns the circumstances of his accident. He learns about his damaged organs and his emergency operation. Confused by some black pages, Rohan remembers that Taro's heart stopped and theorizes that he was dead at this precise moment. Seeing that some of his pages are now colored yellow, Rohan has a eureka moment and turns it into a Pop-up book

, making the spots of color in Taro's page pop out of the book. Doing the same with Mai and Mao, Rohan connects all three "souls" through the paper hands reaching out of the books. 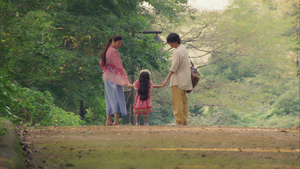 Later, Taro, Mao, and Mai walk together, relieved that Mao is well. Mao says she's thirsty, and Taro buys her a can. When he returns, Taro sees that Mai is worried about him and reassures her, pointing out her forehead wrinkles. Embarrassed, he also scratches his head with his pinky, which makes Mai think of Akira. Moreover, he also offers a can of sweet coffee to her. Mai remembers Akira's words, who promised that he, Mai, and Mao would be fine. Realizing she may have found love again, Mai smiles and fights back tears of joy. She quickly joins Mao and Taro. All three walk away, holding each other's hands. Meanwhile, Rohan ponders on what he's just witnessed. 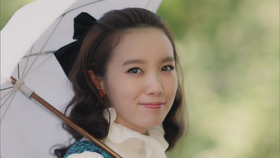 Kyoka wonders at how many strange things happen around Rohan Kishibe

Later, Rohan is seen playing with his dice at his office again. Kyoka wonders how the accidents near Mai are just a coincidence. Rohan tries to rationalize Mai's history as something that is not impossible, but Kyoka insists on it being a miracle. However, Rohan wonders more about how Mao could have known about Taro, theorizing that genetics could contain the soul's memories. Thus, Mao was carrying some of Akira Katahira's soul and was connected to him. Kyoka views this as Mao guiding her mother to her late father's soul. Although she feels some sadness, she acknowledges that it was for the best. Taro took up photography again, but his photos are different from the ones she used to like. Kyoka suddenly remembers that Rohan explained Mao's powers in a strangely calm manner. She wonders why it seems Rohan acts like supernatural powers are common, but he dismisses it as a hallucination. Exasperated with Kyoka's curiosity, Rohan throws Kyoka out of his house, only to open it up again and give her back her umbrella. Kyoka promises to come back tomorrow. On the way down, Kyoka reflects that so many things happen in the world and, looking back at Rohan's house, adds that they happen especially around Rohan Kishibe.

The series ends with Rohan performing his exercise routine before resuming his work on his next chapter.