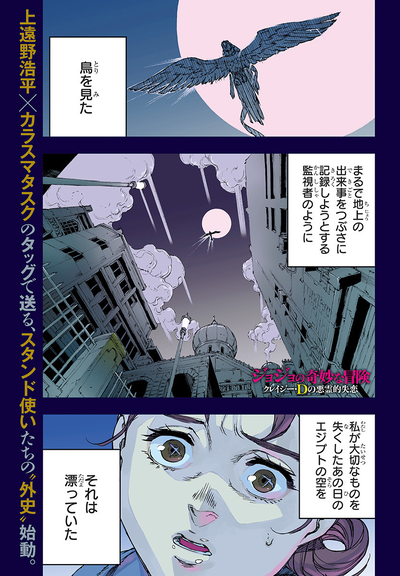 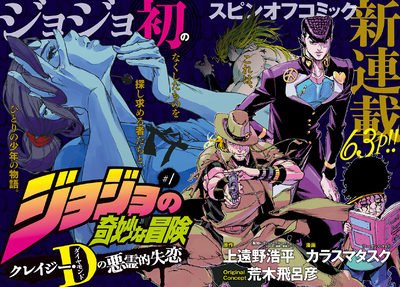 A girl remembers the day she saw a bird circling the sky when she was in Egypt. On that day, she lost someone very important to her.

In Cairo, Egypt, March 1999, an elderly woman begs a tall man to find her missing parrot. She looks at a photo of her son with Pet Shop and the missing parrot on his shoulders. Her son was an animal trainer who tried to escape from DIO and got killed by the vampire. After his death, his mother took care of his parrot.

The man, who is revealed to be Hol Horse, says that she should ask the Speedwagon Foundation members to look for the parrot since they still drop in to check on her occasionally. However, he realizes that if the parrot got trained the same way as Pet Shop, then it might be a Stand user and the SPW would probably kill it if they think it's a threat. Hol Horse accepts the woman's request, not wanting to say no to a woman no matter their age, and heads into the city.

Hol Horse looks at his watch, complaining that it's eight tenths of a second off since it could give him bad luck. While walking by an alley, a boy warns Hol Horse that nobody can pass through that road without hiring him as a guide. Hol Horse summons Emperor and points toward the sky, shooting three bullets at two flower pots on the balcony of a building. He warns the boy to watch his head, but the boy doesn't understand since he can't see Stands and demands that Hol Horse gives him money so the boy can guide him. The flower pots fall and shatter on the ground, while the man who was watering the plants angrily threatens to punish the boy. The boy who was trying to scam Hol Horse runs away in fear, wondering what just happened.

Hol Horse disappears into the building covered in fog. He calls out for Kenny G., asking if he received Hol Horse's signal and can give him a sign. Hol Horse then hears someone tell him to call off his Stand first. Hol Horse puts away Emperor, and the room starts changing due to Tenore Sax's ability. When Hol Horse gets up, he realizes he accidentally touched an outlet on the wall. He's worried until Mariah reveals herself, claiming that it wasn't her Stand that he just touched. However, she threatens that he knows what will happen if he tries to pull something. When Hol Horse retorts that he wouldn't harm a lady, Mariah responds that he should be settled down by now. Hol Horse asserts that a relationship like what Mariah and Kenny have together isn't his thing.

Mariah tells Hol Horse that Kenny won't be coming to see him since he doesn't like the cowboy, but he does have two visitors who want to see him. Oingo and Boingo have been freeloading with her and Kenny for a month so Mariah asks Hol Horse to take them with him. Hol Horse claims that he was planning to see Boingo anyways. As he's about to leave, Mariah asks if Hol Horse still has dreams. Although Hol Horse declares that he's too tough to have nightmares, Mariah retaliates that Hol Horse has been wearing three watches ever since he got shot in the head. She's been having constant dreams about DIO ordering her to defeat the Joestars, with Mariah being unable to do anything but grovel and apologize. The Speedwagon Foundation already told Mariah about all the terrible things DIO did, but she wonders why she still calls him "Lord DIO" in her dreams.

Hol Horse tries comforting Mariah by saying that even he fell for DIO's charms and that although they may be fools for falling for a conman's tricks, they're still victims. Suddenly, Mariah becomes enraged upon hearing that Hol Horse called her a fool and kicks him to the ground. As she stomps on him, Hol Horse's head touches her Bastet, causing his body to become a magnet. Darts from a dartboard fly toward Hol Horse as he tries running away. He shoots a door's lock and manages to hide inside the room, but ends up getting stuck to the pipes. Several swords fly toward Hol Horse but are stopped at the door before reaching his face.

Boingo peeks through the door and reveals that his Tohth already predicted that Boingo would join Hol Horse in this parrot hunt. Hol Horse says that he'd love to catch up with him but asks if he can get Mariah to deactivate her Stand. Boingo denies unless Hol Horse promises to never get involved with him again and to forget all about Boingo and Tohth. When Hol Horse complains that it's impossible for him to just forget something, Boingo threatens to push in one of the swords. Mariah shows up again and calls off her Stand, declaring that she was simply teaching Hol Horse a lesson for taking advantage of Boingo back then. Hol Horse reads the pages of Tohth, which narrates that Boingo and Hol Horse team up again to find the parrot. In order to do so, they have to go to Morioh in Japan.

Meanwhile in Morioh, a girl is crouching by a grave. She says that she got into university and that it's been ten years since the person left them. A bird flies by her and she sees a vision from ten years ago when DIO tried luring the girl to him. Someone tries hiding with the girl, whose name is revealed to be Ryoko, but DIO tells them not to be afraid. The grave is revealed to be Noriaki Kakyoin's, who is the cousin of Ryoko. She starts crying, wondering what happened to him. On the phone, Ryoko says that she just finished her visit and plans to stay with her aunt for a few more days since she won't be able to visit as often once classes start. While walking, she notices the "Oingo Boingo Brothers Adventure" book on the ground and starts reading it. She sees DIO mentioned in the pages and is shocked, realizing Kakyoin must have some relation.

Hol Horse passes by Ryoko, wondering where Boingo went. He asks some schoolgirls if they've seen him but they start running away from him instead. Hol Horse complains about not knowing anyone in Morioh when he suddenly hears DIO's voice in his head. Suddenly, a possessed driver runs over several people on the sidewalk, as if he is following orders from someone. Hol Horse attempts to shoot the car, but continues hearing DIO's voice behind him. He trembles from hesitation as he tries calming himself down since DIO is already dead, but realizes he doesn't have the conviction to get over the vampire. Ever since he tried betraying DIO and gave into fear, he lost to him. The car gets closer to Hol Horse and he finally manages to shoot two bullets into the tire. However, that causes the car to launch toward him. He sees a glimpse of the driver, noticing that his eyes lack irises and instead have five holes in its place.

Before Hol Horse could do anything, the car instantly gets punched away from him. Hol Horse sees a boy with a pompadour and his Stand behind him. The boy tells Hol Horse that he saw him summon a gun in his hand out of thin air. He realizes the man must have the same kind of ability as him, but that doesn't mean he'll be friendly. The two confront each other, prepared to fight face-to-face.

Author's Note
“
I put alot of effort into this story, so I hope you'll look forward to the new adventures of Josuke and the others. (Kouhei Kadono)
Learning that I'd be drawing Josuke and Co made me feel like Polnareff when he glimpsed DIO's true powers. (Tasuku Karasuma)
”
“
気合い入れました、仗助たちの新冒険にご期待ください。（上遠野）
仗助達を描く事になるとはまさにDIOの力を垣間見たポルナレフの心境です（カラスマ）
”