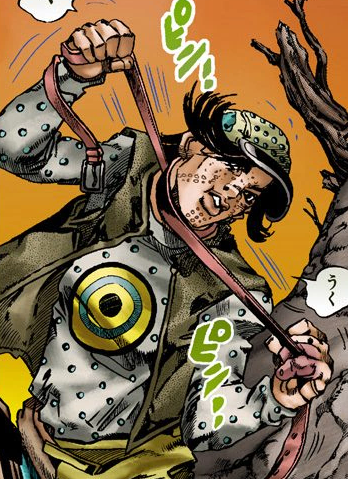 The series is known for alternating colors between media, the information presented below may or may not be canon.
Skin(Fair)
Hair(Black)
Eyes(Black)
Hat
(Gold-yellow with blue ribbons and a gray brim.)
Outfit
(Dark gray vest over a gray shirt with blue polka dots and a yellow, blue, and black target, gray pants.)

Andre declares his family will claim the SBR's prize

Andre is prideful and brags about what he can do to his brother. He's confident in his abilities, exclaiming that Gyro's steel balls will never reach him.[4]

Benjamin states that Andre is the most talented in the family.[4]

Tomb of the Boom grants every member of the Boomboom family the ability to manipulate iron in different ways. Andre's power is to magnetize anyone his blood touches. It is the most powerful of the three, according to Benjamin.[5]

Andre can somehow close his nostrils without touching them. He can also stuff his ears into the ear holes, like Giorno Giovanna.

During the second stage, the Boomboom Family follows Johnny Joestar and Gyro Zeppeli in the desert because of Oyecomova, who has put a bounty on Gyro. Andre is sent to trick them. He lets himself be bitten by a spotted salamander and approaches the duo at sunset, pretending to merely be a hurt competitor. He begs for some fire and Gyro reluctantly throws a burning log at him. To sedate himself, Andre uses his belt to strangle himself and cuts off the poison before seemingly losing consciousness, all to trick Gyro into approaching him. Soon enough, Gyro kicks Andre's knife aside, magnetizing his leg. The rest of the family then arrives. 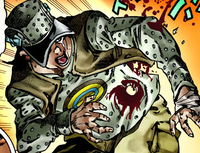 Gyro's feet is invaded by steel and the duo realizes that they are dealing with enemies that are assassinating the competition. They realize that the Boomboom's ability is a magnetic power when Johnny's pistol is disassembled and the pieces are attracted to Gyro's feet. Benjamin Boomboom, the patriarch, destroys an incoming Steel Ball aimed at him with his magnetism. Andre's knife flies towards Gyro's neck but he blocks it. Furious at Gyro for almost letting him die, Andre is the first to charge closer to Gyro. Gyro throws his remaining ball at a rock, making a piece of rock shoot through Andre. Seeing the Boomboom Family circle around them, Gyro understands that the magnetism is tied to his proximity to them and thus, the duo flees. As they move away from the Boomboom, the magnetism weakens but Benjamin shoots through the hole in Andre, splashing some of Andre's blood on Johnny.