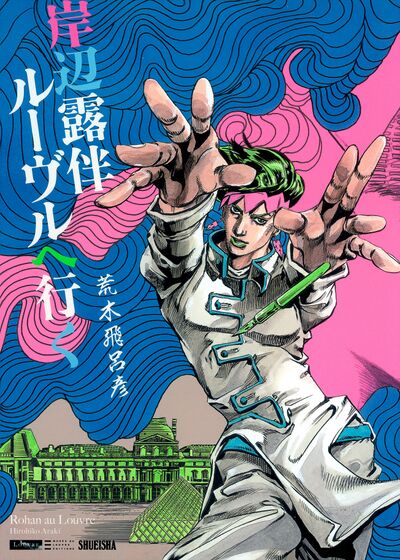 Rohan at the Louvre (岸辺露伴 ルーヴルへ行く , Kishibe Rohan Rūvuru e Iku, lit. Rohan Kishibe Goes to the Louvre) is a one-shot written by Hirohiko Araki starring Rohan Kishibe. The one-shot was originally featured at the Louvre in the The Louvre Invites The Comics exhibit from January 22 to April 13, 2009 before being published in Ultra Jump on March 19, 2010.[10][11]

Rohan Kishibe presents himself to the reader, describing his occupation as a manga artist and his peculiar ability to turn people into books that he can read and write in. He asks his readers whether they have seen the blackest color in the world, but quickly corrects himself, noting that no one can perceive it as long as light exists... and yet, he himself has seen it. Thus, Rohan introduces an incident involving the disappearance of four people at the Louvre.

Ten years prior to the events in question, a seventeen-year-old Rohan moved into his grandmother's inn for the summer, hoping to create a one-shot that would launch his career as a manga artist. At that time, Rohan met a young and mysterious woman named Nanase Fujikura, the only tenant of the inn. The two youths eventually became friends, though the woman seemed unusually interested in Rohan's work. One evening, Nanase presented to Rohan the story of the blackest pigment of the world: 300 years ago, the Japanese artist Nizaemon Yamamura found the pigment within a tree trunk and used it in many of his works. However, the tree he cut to exploit the pigment was private property, and the lord of the property had him put to death. Rumors spread that the painter cast a curse upon his works, leading to all of his paintings being burned except one. Nanase had seen that "evil" painting once, before it was sold to the Louvre. Before she could provide any more detail, Nanase was interrupted by a call from her husband, and rushed out of the inn to meet with him. One week later, Nanase mysterious reappeared and tearfully threw herself into Rohan's arms. Seeing that Rohan created a character in his manga based on her likeness, Nanase quickly destroyed the drafts and apologized to Rohan before once again disappearing from his life.

After restarting his manuscript from scratch, Rohan continued to pursue his passion, eventually becoming a successful manga artist. Ten years passed before Rohan was reminded of the cursed painting by chance during a conversation with Okuyasu Nijimura, Koichi Hirose, and Josuke Higashikata. Once more overcome with curiosity, Rohan decides to visit the Louvre and see the painting for himself. In France, Rohan meets with an interpreter by the name of Noguchi, who reveals that the painting he seeks is being held in the Louvre's private archives. However, Noguchi notes that the painting is stored in an abandoned storage area and a digital photograph of the work does not exist. Due to the unusual circumstances surrounding the work, Rohan, Noguchi, a curator named Gaucher, and two firemen are granted permission to locate and move the painting.

The group travels deep into the underground tunnels of the Louvre, eventually finding the door to the storage room at the bottom of a staircase in the depths of the building. The firemen glimpse the painting while attempting to break down the door, but suddenly see a shadow moving. When Gaucher and the firemen break down the door to investigate, one of the firemen is suddenly shot in the head, seemingly out of nowhere. The four survivors bear witness to a mob emerging from the darkness and staring directly at them. Gaucher recognizes one of the people in the mob as the victim of a car accident, and his body is instantly crushed against the wall, with tire marks appearing on his skin. Noguchi attempts to escape by climbing the stairs, but is cornered by more of the mysterious phantoms. As the second fireman recognizes a man he saw die in the war and is himself gunned down, Rohan sees several of his ancestors within the ghostly mob, including his grandmother. Rohan uses his ability to read one of the ghosts, but finds that their pages contain only the word "death." Noguchi sees her son Pierre, who drowned in a lake after his mother neglected him, and embraces her son as her body is filled with water and explodes.

Now alone with the ghosts, Rohan sees Nanase emerge from the cursed painting, having been its subject from the beginning. Rohan is overwhelmed by the undead as Nanase apologizes for allowing the painter's hatred to emerge. Suddenly, Rohan realizes that the painting uses its victims' memories to materialize their relatives by blood, and makes the decision to use Heaven's Door on himself and erase all of his own memories. The undead vanish, leaving a newly-amnesiac Rohan to crawl up the cobweb-infested stairs to safety. After reaching the top of the stairs, Rohan sees and follows a second command on his hand to rub his head, erasing the first command and restoring his memory.

In truth, the cursed painting had been created from spider-like insects living inside the darkness of the tree Nizaemon cut down. The artist's hatred during his death seeped into the painting, inflicting itself on any who came near it by reviving their memories, and through them the memories of their ancestors. Rohan later discovered that Nizaemon was executed shortly after marrying a certain Nanase Kishibe, who had her husband create a portrait of her before falling ill and dying. Nanase dedicated her afterlife to sealing away Nizaemon's hatred, using Rohan as a catalyst. Had she not destroyed his drawings, Rohan believes he might have died in the same way as his companions, succumbing to the memory of his love for her. Nanase cried the day she left him because she wanted to free herself of Nizaemon's curse and join her husband in death.

Having achieved the goal of his trip, Rohan leaves the Louvre and prepares to return to Morioh. The manga artist notes that the curator who acquired the painting in 1989 remains missing, and has no confidence that the curator or his own companions will ever be seen again. The painting itself was subjected to a thorough scientific examination before supposedly being burned, though Rohan is unable to confirm its destruction.