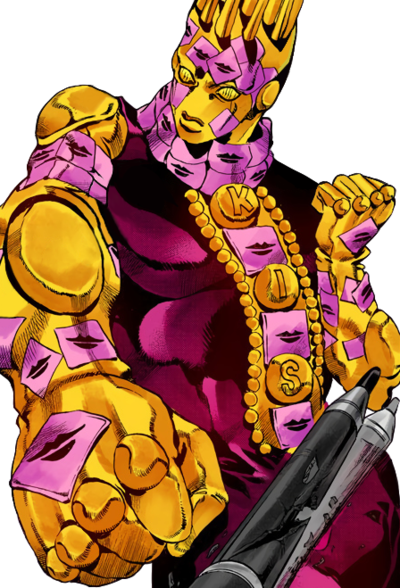 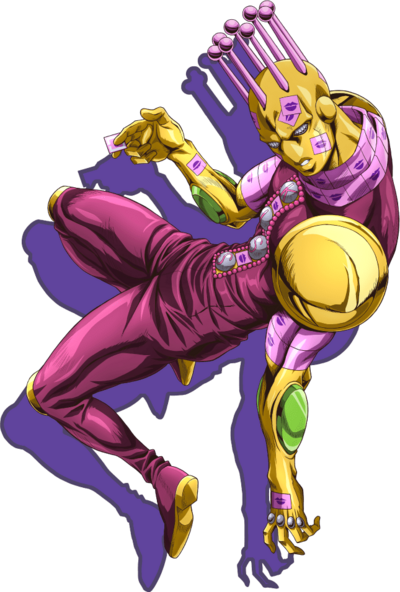 Kiss (キッス, Kissu) is the Stand of Ermes Costello, featured in the sixth part of the JoJo's Bizarre Adventure series, Stone Ocean. It is a short-range humanoid Stand that creates stickers. When a sticker is stuck onto an object, it creates a duplicate. When a sticker is removed, the two objects merge back together, causing severe damage.

Its head is bald with a metallic texture except for a couple of straight spikes pointing upward with round edges, giving it the appearance of a crown. It has two studs on the sides of its head that resemble ears.

Ermes and Kiss are able to create distinctive square stickers out of their palms.[2] If they put a sticker on an object, an exact copy of it emerges with the sticker either remaining on the copy or the original. There is no restriction on how far the copy can be taken away from the object. If Ermes places a sticker on someone, the corresponding limb, be it a finger,[1] an arm[3] or the head,[4] will sprout out of the body like an additional body part. She is also free to use it on herself.[1] When Kiss’s sticker is placed on someone’s tongue it speaks concurrently with the affected individual.[5]

When the sticker is removed or destroyed, the two objects spring toward each other and fuse back into one object with great force, causing a fissure and effectively damaging it.[1] No matter the distance, the surrounding conditions like shifted gravity,[6] or the weight attached to them,[7] the two will always head toward each other, even broken parts of the copy will return to the original.[8] It allows Ermes to create traps by making it so the duplicate will fly at an enemy while returning to the original,[1] or depending on the object, to move rapidly from one place to another by hanging on to them.