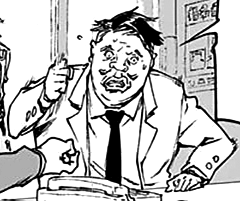 Hiraoka (平岡) is a tertiary character featured in Crazy Diamond's Demonic Heartbreak, a spinoff manga of JoJo's Bizarre Adventure. He is a police inspector in the Budogaoka police department of Morioh.

Hiraoka is an overweight man with messy side-swept hair and shaved sides. He has S-shaped eyebrows, a handlebar mustache with a gap in the middle, and thick lips. Hiraoka wears a light suit and dark tie.

After Josuke heals him, his nose grows prominently wide.[2]

Not much is known about Hiraoka's personality. He panics after his accident and constantly insists that he's innocent, despite his coworker telling him to relax and calm down.[1] 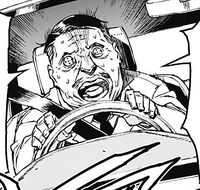 Hiraoka possessed by a Stand

In March 1999, Inspector Hiraoka is affected by a parrot's Stand ability while driving, causing his body to lose free will. His body replays the scene of Wilson Phillips following DIO's orders back in Cairo, Egypt, from a decade prior. As if he's listening to DIO's orders himself, Hiraoka runs over several pedestrians on a sidewalk just in front of Budogaoka Police Station. He nearly crashes into Hol Horse as well, but his car is punched by Josuke Higashikata's Crazy Diamond and smashes into a nearby shop.[3]

From the crash, Hiroaka's body launches toward Hol Horse from behind. Josuke uses Crazy Diamond to punch the driver in the face and then grabs the man by his tie. Josuke feels he'll regret doing so but heals Hiraoka with his Stand, not wanting anyone to die during this accident. The driver suddenly vomits a set of punched cards on Josuke's shoes. He regains consciousness and wonders what happened to him, realizing his nose is suddenly wider as well due to Josuke not fully restoring him to how he originally was.

Complaining that Hiraoka puked all over his Bally shoes, Josuke starts rubbing his shoe with the man's suit. In fear, Hiraoka runs away from Josuke, screaming.[2]

Hiraoka heads to Budogaoka Police Station, insisting that the car crash wasn't his fault while another police officer tries calming him down.[1]

Hol Horse arrives at the police station but gets possessed by the parrot's Stand ability. He aims Emperor at the back of Hiraoka's head, just like he did when he was about to shoot DIO 10 years ago. Fortunately, Hol Horse escapes the ability and leaves Hiraoka unharmed.