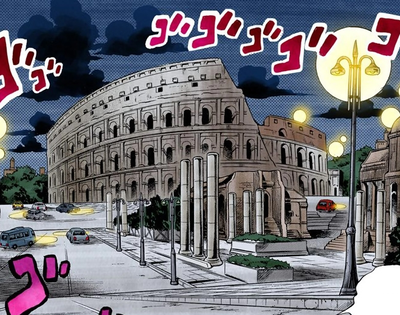 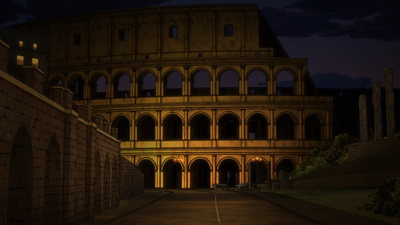 The Colosseum (コロッセオ, Korosseo, italian. Colosseo) or Coliseum, also known as the Flavian Amphitheater, is a location featured primarily in Battle Tendency and Vento Aureo. It is a large ellipsoid arena or amphitheater built during the Flavian dynasty and one of the most famous examples of its kind.

The Colosseum is notable for being the general location where the Pillar Men slumbered until their awakening in 1938. It is also where Team Bucciarati meets with a mysterious ally who wishes to reveal the Arrow's hidden potential to them.

The Colosseum is one of Rome's most famous landmarks, as well as a recurring place of interest in the JoJo's Bizarre Adventure series. It is a large oval amphitheater that the Roman Emperor, Vespasian, and his successor Titus, had built in honor of their Flavian dynasty. Thus, it was named the 'Flavian Amphitheater'. It was a marvel of architecture and engineering, as it was able to welcome at least 50,000 spectators. Many spectacles were organized here, from gladiator fights to executions, and naumachia (naval battles after they flooded the arena). It was abandoned and it fell to ruin over time because of earthquakes and the locals robbing the stones. Nowadays, it's mostly a tourist attraction.[1]

In Battle Tendency, it is revealed that there is a large cavern underneath the Colosseum where the Pillar Men slumbered. The cavern itself is decorated with strange Roman statues and murals but also has a working Minecart system. The cavern entrance can be found behind a large marble mask referred to as the Bocca della Verità (The Mouth of Truth) located at the Santa Maria in Cosmedin church.[2]

Hirohiko Araki has visited the Colosseum on numerous occasions, feeling a strong emotion every time saying "Be it a happy or a sad day, whether the weather is clear or rainy, whether a war or a crisis happens, whether a young couple or Audrey Hepburn go visit it, the Colosseum has remained for many years. This longevity simply gives me courage."[3]

The Colosseum appears as a stage in GioGio's Bizarre Adventure. The front of the Colosseum appears in Chapter 10-3 of Super Story Mode, serving as the backdrop of the duel between Bruno Bucciarati and Secco. Chapter 11-1 and 11-2 of Super Story Mode take place inside the Colosseum, where both the battle between Jean Pierre Polnareff and Diavolo and Bucciarati's fight with Chariot Requiem take place. Expand/Collapse All

Giorno rushes Cioccolata with Gold Experience and flings him into a garbage truck. Meanwhile, Bucciarati confronts Secco in front of the Colosseum. The player now controls Bucciarati and must defeat Secco. The fight is made difficult by Secco's ability to dive underground. If Bucciarati moves while Secco is underground, he can attack near-instantly. As the fight progresses, Secco will also chew up pavement and spit it out above Bucciarati, effectively creating a rain of stone.

Once the battle ends, Secco attempts to use a nearby youth as a hostage, only to be soundly defeated by Sticky Fingers's zippers. However, Bucciarati's life energy has begun to run out, leaving him deaf and blind. Unbeknownst to either party, the hostage has stuck around: it is none other than Doppio, who has followed the team to the Colosseum.
11-1
His Name Is Diavolo
(そいつの名はディアボロ Soitsu no Na wa Diaboro)

Using his spiritual energy, Diavolo tricks a blind Bucciarati into believing that Doppio is Trish. The two enter the Colosseum to meet the mysterious ally, who is suspicious of Doppio. Although Bucciarati attempts to introduce "Trish" to the ally, Doppio sees the Arrow in the ally's hand, confirming his suspicion of their identity. Diavolo abandons Bucciarati and reveals himself, addressing Jean Pierre Polnareff by name. Diavolo questions why Polnareff brought the Arrow, but intends to put an end to him regardless. The player controls Polnareff in his wheelchair and must attack Diavolo until he has lost enough health to end the level. However, Diavolo can erase time with King Crimson, causing Polnareff's movements to be slowed while Diavolo's remain at full speed. Diavolo can also blind the player with blood and create a shockwave that covers the whole stage. 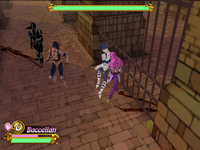 Although Diavolo succeeds in killing Polnareff, the latter pricks Silver Chariot with the Arrow as a last-ditch gambit in his final moments. Diavolo claims the Arrow, but a black figure appears near him. Diavolo tries to threaten the figure, but finds himself gradually falling asleep. Meanwhile, Giorno and the others have entered the Colosseum, only to fall asleep themselves. After waking up, they realize that their souls have switched bodies. Polnareff, now in the turtle's body, addresses the group, stating that the newly-formed Chariot Requiem is neutral and must be defeated to claim the Arrow and defeat King Crimson. The group spots Chariot Requiem, but Diavolo's body gets to it first and summons Sticky Fingers to attack. The team cheers on Bucciarati, now in Diavolo's body, as he attempts to obtain the Arrow. The player controls Bucciarati in Diavolo's body and must defeat Chariot Requiem. However, Chariot Requiem can summon his own version of Sticky Fingers that can move freely and attack Bucciarati. Moreover, Chariot Requiem continuously walks forward toward the exit of the Colosseum. If Requiem exits the Colosseum, the fight is lost. 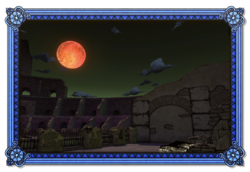 The Colosseum, as seen near the end of Vento Aureo, is an available battleground in Eyes of Heaven.

The Colosseum appears as a stage in All Star Battle R, returning from Eyes of Heaven.