C-Moon is a humanoid Stand with a slightly more threatening appearance reminiscent to Darth Maul from the Star Wars franchise.[1] It is born as a result of the Green Baby fusing with Pucci and his Stand, Whitesnake. Due to this, its appearance shares similarities with both.

Its face is skeletal, bearing elements of the Green Baby's appearance: Completely red eyes with thick, spiked eyelashes, and vein-like textures and patterns on its face. It has Whitesnake's striped Guanine/Δdenine/Cytosine/Thymine pattern on its hips, chest, and on the top and crown of its head (the delta sign that replaces the "A" may indicate a "missing genome"). Its head, shoulders, arms and legs bear short, arrow-shaped (↑) vestiges, with the top of its head faintly similar to Whitesnake's crown. The back and sides of its head along with a belt incorporating a long, arrow-tipped tail possess a fur-like texture. On a thin waist, it has overt abdominal musculature, and is generally believed to have inherited Whitesnake's figure.

C-Moon is an extremely powerful and dangerous Stand. Although it doesn't have great physical power on its own, perhaps even none (having ∅/Null Destructive Power), its power over gravity greatly impedes its enemies and guarantees that any of its strikes can prove fatal. It possesses the agility, speed, and strength to fight toe-to-toe with powerful close-range Stands like Stone Free.[2][3] 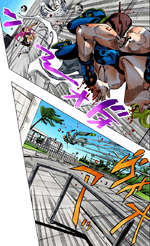 Within a radius of 3 kilometres (1.9 mi) around Pucci, the gravity shifts so that people and objects are repelled from him. Thus, any unfixed object will fall away from Pucci as if the Earth was a giant cliff[5] but then return to normal once they fall sufficiently away.[6] Likewise, anyone positioned above Pucci will fall upward towards space.[7] C-Moon itself is unaffected and can freely move around its user.[5] By default, Pucci's gravity always makes him attracted to the surface below his feet, allowing him to stand on any surface.[5] As an extension, he is able to levitate through space freely when in an object due to omni-directional gravitational force.[8]