This is a list of minor characters featured in the fifth part of JoJo's Bizarre Adventure, Vento Aureo. 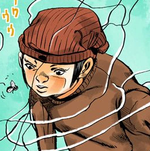 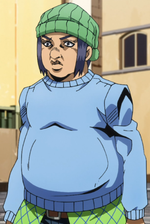 Antonio Rossi (アントニオ・ロッシ, Antonio Rosshi) is a Neapolitan civilian who Bruno Bucciarati uses as a hiding spot by using Sticky Fingers on him when fleeing from Giorno. Giorno lures Bucciarati out by transforming Bucciarati's tooth into a small fly, which the boy tries to swat away. He successfully hits the fly but gets himself hurt and ejects Bucciarati out of him. Later, Bucciarati uses the boy's arm and hesitates to attack with it when he notices it has needle scars, pointing out that he's a drug addict. Giorno checks his student ID and finds out that he's only 13 years old.

He is only named in the anime, since his student ID can be seen.
Mrs. Menini 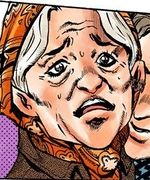 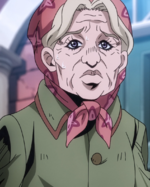 Manga Debut: Chapter 457: Find Polpo's Fortune!
Anime Debut: GW Episode 5: Find Polpo's Fortune!
Voice Actor: Nariko Morimoto (Japanese), Cindy Robinson (English)
An old woman from Bucciarati's neighborhood who is well acquainted with the latter and respects him as an honorable gangster. However, she brings one of her friends to him and questions him about the drug flowing in Naples, hoping that he isn't among the ones responsible for the drug.

She is named only in the anime adaptation.

Manga Debut: Chapter 472: Narancia's Aerosmith, Part 3 (Mentioned only) (Flashback)
Anime Debut: GW Episode 11: Narancia's Aerosmith (Flashback)
Voice Actor: Serika Hiromatsu (Japanese), Tiana Camacho (English)
Narancia Ghirga's mother is only mentioned in a flashback, where it is stated that she died in 1994 from an eye infection when Narancia was only 10 years old. Despite the fact that Narancia's own eye infection was a mere coincidence after being beaten up by police officers, all of his friends were convinced that it was contagious and that he got it from his mother. Narancia himself began to believe the rumor and was frightened that he would die at any time, all alone. The anime shows her date of birth and date of death to be respectively September 21, 1958 and January 16, 1994.

She is fully shown and given the name "Mela Ghirga" in the TV anime adaptation. Mela is "apple" in Italian, echoing Narancia's vaguely fruit-themed name.

Manga Debut: Chapter 577: The Requiem Quietly Plays, Part 6
Anime Debut: GW Episode 34: The Requiem Quietly Plays, Part 1
Benedict (ベネディクト, Benedikuto) is a dog affected by Chariot Requiem. His soul swaps with his owner's and they exchange bodies. Benedict barks and his owner (now in Benedict's body), worriedly tries to talk but only manages to bark as well. In the anime, the owner later manages to speak and yells for Benedict to stop howling in his body. Benedict then starts licking his owner with their bodies still exchanged.

He is only named in the anime adaptation. 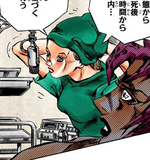