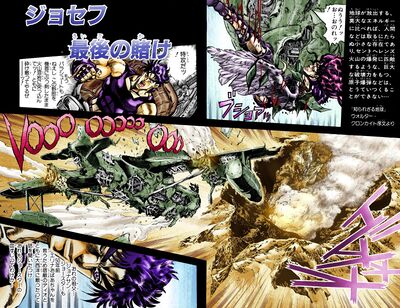 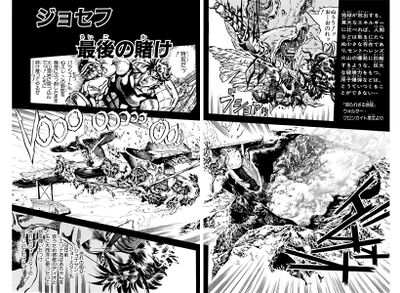 Joseph's Final Gamble (ジョセフ 最後の賭け, Josefu Saigo no Kake), originally The Man Who Became a God!! (神となった男!!, Kami to Natta Otoko!!) in the WSJ release, is the sixty-seventh chapter of Battle Tendency and the one hundred eleventh chapter of the JoJo's Bizarre Adventure manga.

Joseph accepts his fate as a member of the Joestar family, and attempts to plummet Kars into the volcano by plunging the plane upon him. Kars tries to escape from the force of the nose but is stopped by Stroheim, who is flying in a small aircraft. Before the plane crashes, Stroheim orders Joseph to jump. Falling through the air, Stroheim catches Joseph and gracefully lands on the rim of the volcano, destroying his prosthetic legs. Kars lands in the lava, slowly burning to death, as not even the ultimate being can survive the raw power of Mother Earth. However, while the two men rejoice their victory, Kars' Light Blade pierces through the ground, severing Joseph's left hand. Kars then emerges covered in a lava-proof shell constructed of miniature air pockets. While all known life came from the Earth, and the Earth is capable of taking it all away, not even the Earth itself could defeat the ultimate being, Kars.