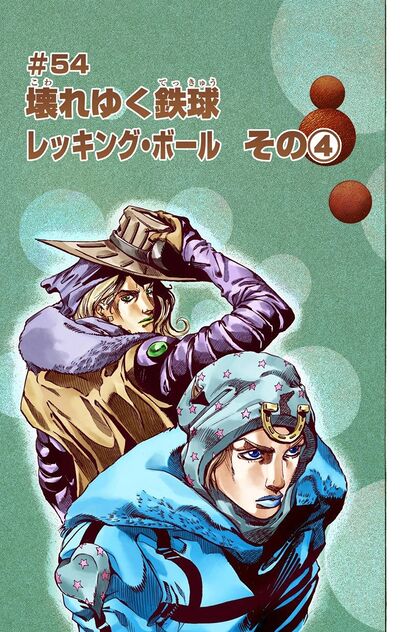 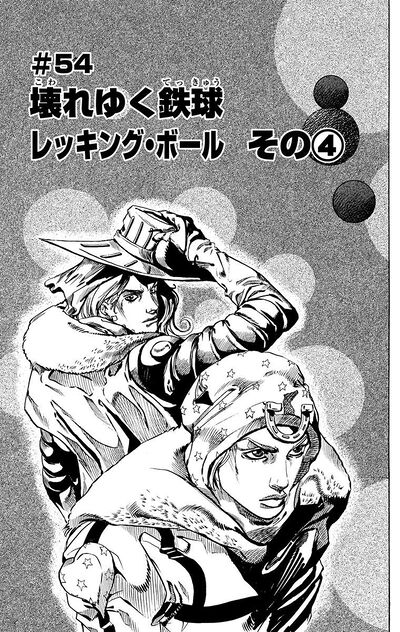 Johnny and Gyro are still in trouble and cannot hope to win without the Golden Rectangle. Gyro decides to get to the wolf's corpse to get a reference for the Golden Rectangle, and Wekapipo throws one Steel Ball at Gyro. When Gyro only uses a Steel Ball to attack Wekapipo, Johnny uses all his nails again to shoot down the satellites and protect Gyro, getting deeply hurt in the process. At the same time, Wekapipo uses the Spin on himself as protection from Gyro's Steel Ball.

Gyro is almost at the wolf's corpse and the Legs but Wekapipo throws his second Ball, forcing Gyro to counter it. The satellites detach themselves and break the ice around the wolf, hiding it under the ice layer. The left-side ataxia influences Gyro again as both Steel Ball user get back their balls, but Gyro is now unable to use the one in his left hand. As Wekapipo attacks, Gyro sees snowflakes, which he uses as a scale to produce the Golden Spin. The result is a success, winning over Wekapipo's Wrecking Ball and defeating him.

Having nothing to look up to in life, Wekapipo tries to kill himself, but Gyro stops him. Gyro reveals that all this time Wekapipo's sister has been spared because her blindness made her harmless. At the same time, Gyro understands that his failure at curing her blindness was ultimately a good thing. The wolf wakes up being only hurt and departs, leaving the Legs. At the same time, the duo's horses come back and Johnny discovers the Indian's path. Before departing as the winners, Gyro asks Wekapipo to go look for Lucy.