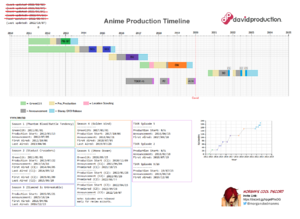 is an American animator, writer, producer, and director. They are best known for creating The Fairly OddParents and Danny Phantom.

, known by his pen name, Falcoon, is an illustrator and character designer for SNK. He has worked heavily on the King of Fighters series.

is a Japanese artist and animator who works in the promotional arts department of Shueisha. He is most known for his illustrations in Dragon Ball Z: Dokkan Battle. He is also a big fan of Dragon Ball. 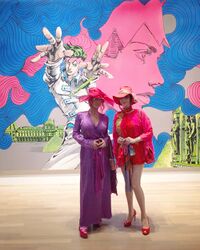 , also known as the Kano Sisters, are a duo of Japanese celebrities.

Both sisters are JoJo fans and post various cosplay on their official Instagram. The pair also keep their JoJo merch in luxuary Louis Vuitton cases estimated to be worth ¥1,000,000.

Mika convinced her older sister, Kyoko, to get into the series by holding a big "JoJo watch party" for the second seasons of the anime. Afterwards, Kyoko got hooked on the series, going back and watching the first season, and then watching the fourth as it aired on TV.

Kyoka notes that she needed to wear a chest binder to hide her bust while cosplaying male characters, revealing in a blog post that it was so painful that she could only wear it for about 8 minutes.

is a Japanese illustrator and character designer. He has done illustrations for various mobile games and visual novels, including Fate/Grand Order, Summon Night and Azur Lane.

K-Suwabe
A Japanese video game illustrator and artist. He has done illustrations for various gacha mobile games, including Fate/Grand Order and Identity V. 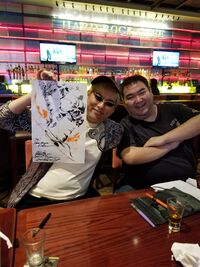 is a Japanese illustrator, animation director and character designer who is most known for working on Naruto Shippuden and Death Note.

He is also good friends with Junichi Hayama.

is a Japanese key animator and character designer. He has worked on shows like Bakemonogatari and Puella Magi Madoka Magica. 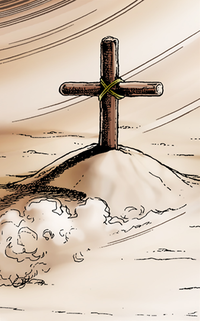 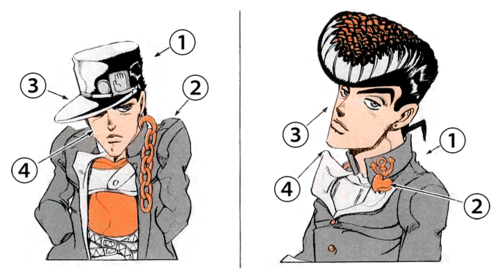 Feelin' JOJO Vol. 3-5
“
Q: Who would win in a Stand battle? Gold Experience vs. Moody Blues

A: Neither of them are direct damage Stands, per se. But creating piranhas could give Gold Experience the advantage. Lastly, Gold Experience could probably win using its "Muda Muda Muda!" attack.

Q: Who would win in a Stand battle? Sex Pistols vs. Aerosmith

A: In a close-range fight, Aerosmith's firepower and Sex Pistols's rate of fire are evenly matched. However, when it comes to a long-distance fight, Sex Pistols's decision making puts it at an advantage.

Q: Who would win in a Stand battle? Sticky Fingers vs. Purple Haze

A: Purple Hazes's deadly virus is certainty terrifying. However, Sticky Fingers has a massive speed advantage and could easily unzip Purple Hazes's arms to neutralize its virus attacks. 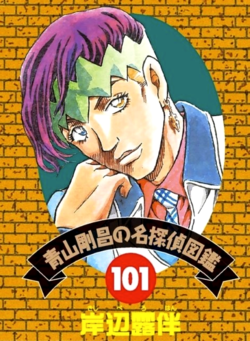 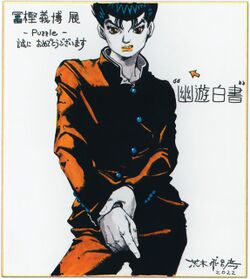