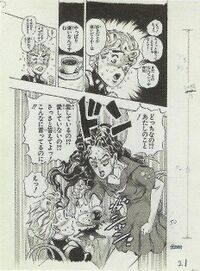 Yukako originated from the experiences that Araki gained after getting married during Part 3.[1] Araki had been married for roughly two years when he created Yukako, choosing to draw her as the other side of women that weren't typically depicted at the time.[1] Araki based Yukako's initial personality and horrific obsession with Koichi on the 1990 film Misery.[2] In the film, the protagonist is held captive by an obsessed superfan.

In the game Heritage for the Future, some of Midler's illustrations were based on depictions of Yukako from the manga.

While writing Part 5, Araki originally planned on having one of the members of the group--including Mista, Narancia, Fugo and Abbacchio--be a spy secretly working for the Boss, who would at some point betray Giorno and Bucciarati. Araki initially settled on making Fugo the traitor similar to the story of Judas in the bible, however, decided against it as he couldn't bare the thought of how Bucciarati would've felt being betrayed by a dear friend. According to Araki, it might've been up to Giorno to dispatch of Fugo, although he thought it too dark and would've leave a bad impression on his younger readers. Because of this, Fugo suddenly leaves the group after a disagreement. Araki later asked Miya Shotaro to write noval... (GHGR)

On a side note, Araki also mentioned while Fugo's Stand is deadly, if he were to fight against Bucciarati, Sticky Fingers is fast enough to easily neatralize its virus attacks by unzipping Purple Haze's arms.

Although JoJo's Bizarre Adventure is one of the largest series in Japan, it'd be quite some time before it received a full TV anime adaption. When Hiroyuki Omori, a producer at Warner Brothers Japan, was approached about making an anime for the series, he initially thought it too difficult of a task for any studio to pull off. However, after getting planning permission from Shueisha, Omori set out on finding a suitable studio for the project.[3]

Omori chose David Production as the studio to animate JoJo's Bizarre Adventure: The Animation because of their work on the series Tatakau Shisho, which showed "showed powerful linework and careful animation", and therefore convinced him they could adapt a series like JoJo. All three parts of the anime (including Phantom Blood, Battle Tendency and Stardust Crusaders) were greenlit simultaneously in 2011.[4] However, pre-production for the first season wouldn't start until March 2012.

With the success of the first season, the studio immediately begun work on the second season,Stardust Crusaders.

The fourth season of the anime, Golden Wind, was greenlit in January 2017. On July 25, 2017, the directors for the season went on a trip to Italy to begin location scouting, which lasted roughly eight to nine days.[5]

Takahiro Kishida, who had previously worked as an animator for OVAs was brought back as the character designer.

Production on the fifth series of anime started in March 2021, a month prior to it's announcement at JOESTAR The Inherited Soul.