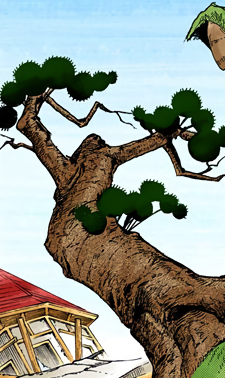 The Twin Pines (二本松, Nihonmatsu) are a recurring pair of pine trees in the eighth part of the JoJo's Bizarre Adventure series, JoJolion. The base of the pines is repeatedly used for the purpose of the Equivalent Exchange and the land around it is suggested to be supernatural.

The twin pines are a pair of pine trees found in the town of Morioh. Due to the 2011 Earthquake in Japan, the pines were split apart, one hanging off a cliff near the Higashikata Estate, and the other one on Morioh's coast. They are large enough to hang from and have numerous patches of foliage that take on a seemingly spherical shape.

The land around the pines is heavily implied to be supernatural in nature. 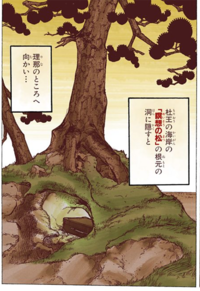 The cave inside the twin pines

The pines' existence dates back to the Meiji era in Japan's history.

In 1901, Johnny Joestar arrived to Japan with the Saint's Corpse. Johnny, desperate to save his wife, hides the corpse in a cave at the base of the pine. Shortly after, Johnny would carry Rina to the base of the pine, and prayed for her health using the corpse's power. Rina is brought back to health, but unfortunately in the process, their son George was afflicted with the disease in her place. Johnny ran off with George and the corpse.

On the same day, a baby washes up on a beach near the pine, and is found by a local fisherman. The baby's identity was investigated, but seemingly nothing came out about his origin.[1]

At some point, a shrine was built at the base of the twin pines.

Decades later, in 1963, a young Norisuke Higashikata IV is saved by his mother, Tomoko Higashikata from the Rock Disease through equivalent exchange near the pine.[2]

In 1991, Norisuke's wife Kaato Higashikata grows an interest in the shrine within the pine, having heard of Johnny Joestar's legend and the curse of the land around it.

Shortly after, Jobin accidentally knocks out a bully threatening him, using his dormant ability. Kaato finds herself in a situation where she decides to use the boy's body to perform an equivalent exchange with Jobin. The boy is buried inside the cave within the pine and with Jobin's curse gone, Kaato roamed free until 5 years later, where the body was found by workers in the area.[3] 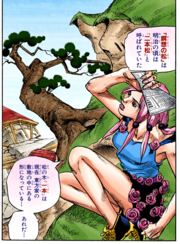 In 2011, Japan is hit by a massive tsunami, as a result, the meditation was split apart into the lone pine near the coast of Morioh, and the other at the Higashikata estate's yard.[4] It was at some point, carved with symbols and words.

Later, Yasuho Hirose investigates the meditation pine near the Higashikata estate and is pulled into the cave of the tree by Tsurugi Higashikata. The cave seemingly lead to the basement in the fruit garden of the estate.

The meditation pine repeatedly reappears throughout the story in the background or passing mentions.