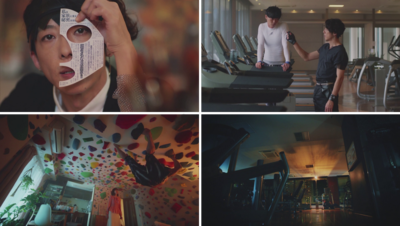 Japanese
“
It seems that I always cross the forbidden red line against my better judgement.
”
—Rohan Kishibe

The Run (ザ・ラン, Za Ran) is the fourth episode of the TV Drama series Thus Spoke Kishibe Rohan. It adapts the one-shot The Run.

In this episode, Rohan Kishibe meets Yoma Hashimoto, a fledgling model obsessed with running, at the gym. Yoma then challenges Rohan to a certain game using the treadmills. 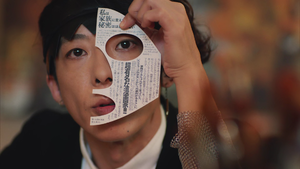 Two realtors approach Rohan Kishibe's house in order to conclude a deal with him. The younger one is awed by Rohan's luxurious mansion though his companion retorts that manga artists are rich nowadays since their series are read globally. The older realtor mistakes the owner as "Gohan Kishida" and plans to trick Rohan into accepting a disadvantageous deal and thus he instructs his companion on how they will coax Rohan. Meanwhile, Rohan is warming up his hands and he hears the realtor calling him from outside.

Rohan lets the realtors enter and the older one profusely apologizes for getting Rohan's name wrong. Rohan doesn't mind the mistake as he merely wants people to know his work and not his name. However, Rohan mocks them by signing an autograph for them as "Gohan Kishida". The realtors apologize again and the senior realtor takes out a contract for the purchase of a plot of land in the mountains. The realtor mentions that a resort development company has been pestering the landowner for some time and suggests that the current owner fears that Rohan might just wish to resell the land at a higher price. In fact, the realtor himself wonders why a manga artist might need so much land. Rohan then retorts that it is to make manga and when the realtor asks why he must resort to such extremes to sell his story, Rohan is angered that one could suggest that he is making manga to earn money or get famous. Rohan begins to rant and declares that he makes manga in order to be read. Thus, Rohan has to seek material for his story and would be ready to spend his savings for that. Although he signs the contract, Rohan doesn't let the realtor leave his house just yet. Using his ability Heaven's Door, Rohan turns the realtors into books. He examines the senior realtor's bio and sees that the realtor wants to take advantage of him. Thus, he commands the realtor to make an honest deal with him and then tears out a page containing the realtor's deepest secret since Rohan finds it interesting.

Later, Rohan meets with his editor Kyoka Izumi at a cafe as a group of children observe Rohan from afar. Kyoka notices the book that Rohan is reading and asks what he is reading. Rohan simply answers "De Stäel" to which Kyoka asks if he's reading "Crime and Punishment". This irritates Rohan as he is appalled that an editor could mistake the work of the painter De Stäel with the novelist Dostöievski. Moreover, Rohan also berates Kyoka for being early at a meeting. Suddenly, one of the boys from earlier asks for an autograph. Kyoka tells the boy that Rohan is busy but Rohan has already completed his autograph. Kyoka is surprised that Rohan could gently sign an autograph for a fan but he retorts that he is always loyal to his fans. 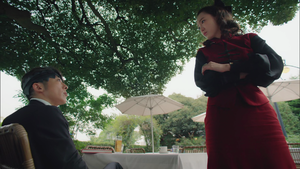 Rohan then asks Kyoka to request an advance payment from Shumeisha because he went bankrupt, and that his artbook is all that he has left. Astonished, Kyoka asks how he could end up without money and Rohan explains that he's bought a mountain range that is said to be inhabited by yokais. Kyoka asks why Rohan didn't simply go there to ask questions but he points out his extremely busy schedule and adds that a counteroffer from a company wanting to build a resort there would have stopped him from going in the mountains. Kyoka argues that if the legend of the yokai is false then the purchase would have been for nothing either. She asks if it's even worth it to chase a yokai but Rohan tells her that yokai indeed exist. Kyoka asks if he's seen one, prompting Rohan to mention the story of a man who met a yokai in the mountains. 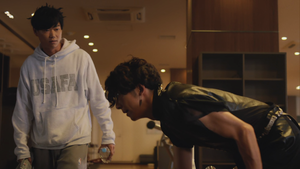 Rohan thus starts to narrate the story of Yoma Hashimoto, a man he's met at the gym though Rohan hides his direct involvement in the story. Yoma Hashimoto is a young fledgling model who spends his days at the gym. One day, Yoma decides to talk to Rohan, admiring the way he exercises. Rohan and Yoma get acquainted and Yoma notably explains that he's been told to start bodybuilding for his job, though Yoma prefers running by default. Yoma takes one of the treadmills but then two other members ask him if he can go because they use the same treadmill. As the two members begin to race each other on the treadmills, Yoma feels frustrated. He decides to run outside, running day and night at various locations. Eventually Yoma makes progress and his girlfriend Mika even notices that he's building up. Mika then encourages Yoma, saying that he will definitely pass the next audition. Yoma too notices the changes in his body and starts to admire himself in the mirror. When they dine together, Yoma mentions that he should specialize in developing a running body-type. He decides he can't eat Mika's pasta and asks that she prepares a high-protein diet for him and heads out to run again. That night, Yoma runs so far he ends up in the mountains.

The next day, Mika wakes up and see that Yoma has littered her home with training equipment. Yoma himself is jumping rope and is training his entire body to optimize his running potential. Mika then discovers that Yoma has stolen money from her to buy protein powder from the gym and she storms out in frustration. Someone rings the apartment's intercom and Yoma angrily calls out the deliveryman for disturbing his training, forcing Mika to apologize. Mika calls him out on it, but Yoma decides to go out running. On his way out, he sees the deliveryman again and confronts him. 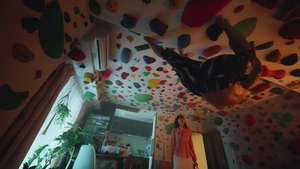 At the gym, Rohan and Yoma talk again. Yoma decides to challenge Rohan to a game. He leads Rohan to the treadmills and explains that they can be set to go faster over time and that both can be stopped via a remote controller. Yoma thus challenges Rohan to see who can run and be the first one to reach the preset speed of 22 km/h. Whoever reaches that speed first can take the remote controller. After a while, both Rohan and Yoma reach the preset speed and try to take the remote at the same time. However, Yoma fails and falls out of the treadmill. Rohan offers his hand, but Yoma slaps it out of frustration and then starts running outside again. One evening, Mika discovers that Yoma has withdrawn 270,000 yen from her bank account and goes back to her apartment to demand an explanation. She is horrified when she sees her apartment walls covered in rock climbing holds and Yoma is clinging to the ceiling. Yoma then explains that he upgraded his gym membership to train there at night, having guessed her card's PIN as her ex's birthday. Infuriated, Mika orders Yoma to get out of her apartment and he deems that she now stands in his way. Later, Yoma confronts the two gym members who bothered him earlier.

That night, Rohan enters the gym and finds that it is empty except for Yoma. Yoma confronts Rohan and accuses Rohan of cheating in their last game by hitting the table so that the remote would fall over before Yoma could grab it. Rohan plays dumb and Yoma wants revenge with another game. Yoma shows off his body and Rohan notes with worry that he seems to have become incredibly athletic. This time, Yoma sets the limit at 25 km/h. Rohan wonders why the treadmills are facing the windows but Yoma doesn't answer and asks back if he is going to quit. Interested, Rohan accepts the challenge. The two begin to run. Mid-run, Rohan finally realizes that it is strange that there aren't even any trainers at the gym and then he notices the corpses of two members. Rohan wants to stop the race and reaches for the remote but Yoma breaks his fingers. Rohan falls to the ground and Yoma approaches him, insisting on continuing their game. Rohan thus uses Heaven's Door to read into his bio. Consulting his pages, Rohan notes that at one point, Yoma has become obsessed with running and training his body. Worse, he discovers that Yoma has killed a number of people such as Mika and even the deliveryman because they were in the way of his bodybuilding. 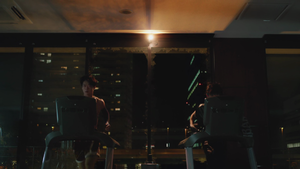 Rohan must run with Yoma, risking death if he loses his game

As Rohan examines the corpses of the gym members, Yoma actually gets out of his book state and resumes running on the treadmill. Yoma then throws some dumbbells at the windows behind the treadmills to up the ante and "invites" Rohan to continue their game. Rohan realizes that his curiosity has put him in a dangerous situation and yet he want to learn more about Yoma. Thus, he plays along and resumes running as well. The two begin to race and steadily approach the 25 km/h limit. Rohan and Yoma reach the limit at the same time and again try to reach for the remote controller. Yoma takes the controller first but he suddenly stops Rohan's treadmill instead. Rohan reveals that he had written a command in Yoma earlier and ordered him to stop Rohan's treadmill anyway. Surprised, Yoma cannot keep up the pace with his treadmill and falls out of the window.

In the present, Kyoka has trouble believing in this story because it wasn't in the news. Rohan answers that the police were briefly involved but there was no evidence to link anything together. Kyoka then questions whether the story has any connection with the mountain range Rohan has bought. Rohan reveals that one location from the story was crucial information, notably the hill that Yoma passed through while running. Arriving at his home, Rohan orders Kyoka to talk to Shumeisha about his pay and leaves her outside. Kyoka laments that Rohan will lose his beautiful house and leaves. Inside, Rohan reminisces what happened. He's realized that Yoma was not really Yoma anymore. Kyoka does some research about Rohan's story and stumbles upon a news article mentioning that a missing woman's body was found in Mutsu-kabe Hill Village, a village through which Yoma has been running.