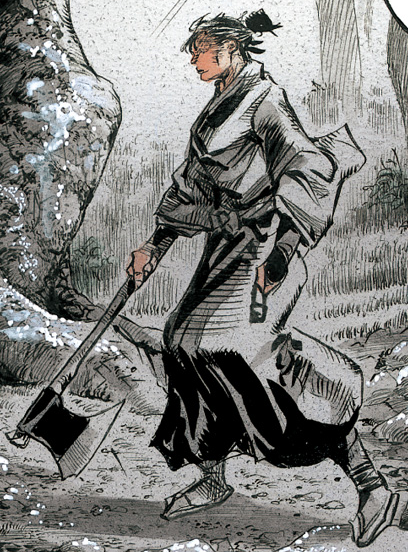 Rohan au Louvre
“
Nizaemon used that pigment for his canvases, before being executed. His loathing for having known such a fate was forever locked into that painting, a work of infinite creativity.
”
—Rohan Kishibe, Rohan au Louvre

Around 310 years prior to the events in Rohan au Louvre Yamamura married Nanase Kishibe. Yamamura had discovered a pigment of a unknown blackness in the trunk of a tree and extracted it to use in his work "Under the Moon", a painting that featured Nanase. Unfortunately, the tree was ancient and chopping it down was forbidden by decree, and so Nizaemon was executed just after his wedding with Nanase. According to legend, Yamamura had drawn the most evil and black painting in the world. That's because, due to the hatred Yamamura held while he was executed, that hate was transferred to the painting, giving it life and a murderous intent. In 1989 it was acquired by the Louvre museum and kept in the Z-13 warehouse, which later was abandoned. For unknown reasons, the painting was the only one not moved to a safer place.