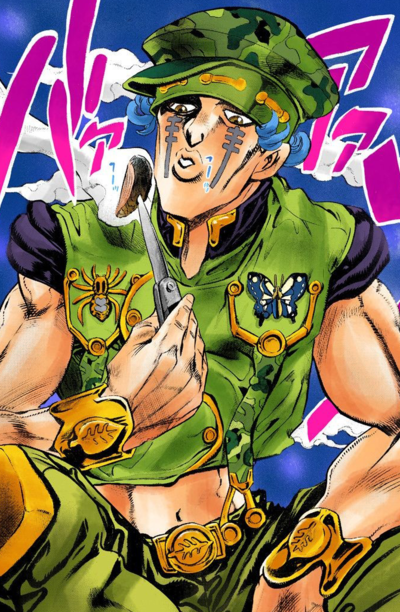 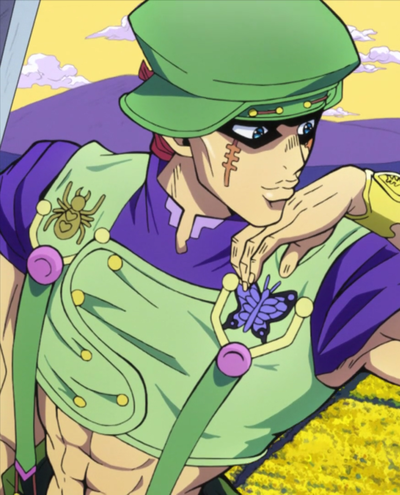 JoJo's Pitter-Patter Pop!
“
I see, so you were curious about my house?
”
—Kanedaichi talking about the transmission tower, Chapter 399: Let's Live on a Transmission Tower, Part 2

Toyohiro Kanedaichi (鋼田一 豊大, Kanedaichi Toyohiro) is the alias of a tertiary antagonist featured in the fourth part of JoJo's Bizarre Adventure, Diamond is Unbreakable, specifically in the "Let's Live on a Transmission Tower" story arc. 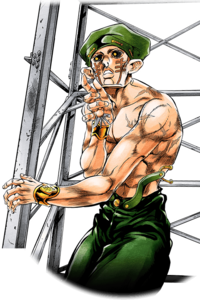 Kanedaichi is a man of average height with a defined muscular build, wearing iron kneecapped pants and a crop top that connects to his belt via two suspenders attached to his shirt pockets. He also wears a hat that appears to be based off either a mariner’s or newsboy’s cap but with the hat’s visor located higher up the hat’s crown. Like many other part 4 characters, Kanedaichi’s clothing is adorned with several brooches, with his in particular reflecting nature. These include a spider and a butterfly on his shirt and leaves on his belt and armbands.

Kanedaichi’s most unique feature is his masks; initially he appears quite well defined and with hair poking out underneath his hat. However, once he removed his first mask, his ears become inhuman in shape with the colors in his eyes inverting. His skin also seems to sag around the bottom of his neck, making the mask more noticeable. In addition, he wears a different hat that is similar to his first but without the brim. The final mask shown is quite unflattering, as Kanedaichi’s head is adorned with only a few tufts of hair and his lips become wide and droopy.

All three of his confirmed faces have two, stitch-like markings that run down Kanedaichi’s cheeks.

The series is known for alternating colors between media, the information presented below may or may not be canon.
Skin(Fair, gray cheek-marks)
Hair(Blue)
Eyes(Gold)
Outfit
(Army Green and purple-black clothes with gold accessories.)
Skin(Light tan, tan cheek-marks)
Hair(Ginger)
Eyes(Cyan)
Outfit
(Green hat and green and purple top with dark green pants and gold accessories.)

Toyohiro was ready to do anything to escape his tower, although he tried not to hurt anyone in doing so and it was Josuke and Mikitaka's determined resistance who pushed him into fighting them. He ultimately has a change of heart, saves Josuke by telling how to exploit the power of Super Fly, and willingly lives a peaceful life in the tower, interacting with tourists casually. 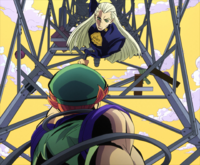 The information below derives from The Book: JoJo's Bizarre Adventure 4th Another Day which was not written by Araki. As such, it may not be considered canon. 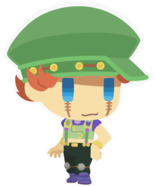