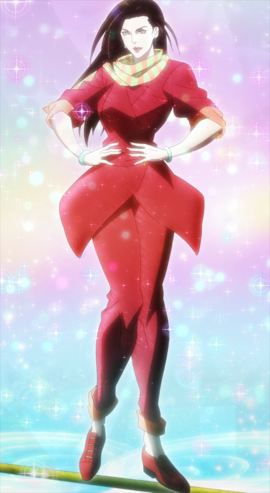 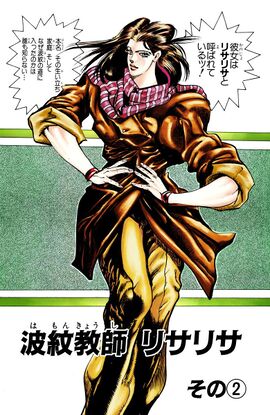 It narrates Joseph and Caesar's arduous training under the Ripple Master Lisa Lisa, then Joseph's encounter with Esidisi. 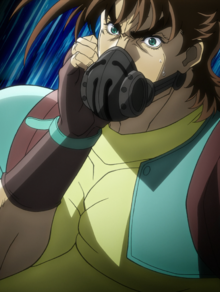 Joseph with a breathing mask on.

Joseph now only a month to live before he dies from the Pillar Men's rings around his aorta and windpipe, and must train to be able of battling the creators of the Stone Mask. He tells Speedwagon to make no mention of this to Erina after he returns to America and goes to Venice with Caesar. It is there that Joseph meets Caesar's mentor Lisa Lisa, who takes him by surprise as a masked gondolier before placing a breathing mask over his face. Lisa Lisa explains that the mask is a training tool to limit his breathing for proper Ripple breathing patterns. Lisa Lisa then takes the two to her home on Air Supplena Island.She then announces that the training begins immediately and kicks Joseph and Caesar down an oil-filled pit and climb the Hell Climb Pillar with the help of the Ripple or die.

Caesar makes his way a few meters up with his Ripple energy, but Joseph attempts to cheat his way out with his shirt as a pole strap. Lisa Lisa notices and cuts the strap to force Joseph back down, the Joestar realizing she actually intends to leave him to die while vowing revenge on her. A day later, Joseph finally realizes Caesar was channeling Ripple through his fingers, following suit and manages to catch up with Caesar sometime later. However, Joseph triggers a trap that causes an high-pressure eruption of oil to blast out of the pillar above them. Caesar breaks through the barrier by using Ripple energy to simultaneously grip the pillar with his feet and repel the barrier, eventually reaching the peak. For his part, Joseph uses the oil's flow to catapult himself to the outer wall, passing his test within 61 hours and 9 minutes.

Joseph confronts Lisa Lisa about the ill treatment he's received, expressing various revenge fantasies before coming to respect her methods once he sees the improvements he's made already. Joseph and Caesar then continue their harsh training under the supervision of Lisa Lisa's servants Loggins and Messina for the next three weeks.

With only one week left before the rings in Joseph's body release their poison, after subduing a pickpocket trying to steal it, he and Caesar learn of the Red Stone of Aja in their teacher's possession. She explains to them that the Pillar Men's leader Kars is the creator of the Stone Mask that claimed their grandfathers' lives, displaying the stone's ability to magnify energy. She explains the Pillar Men seek the stone, as it is a flawless Super Aja, to become ultimate beings able to move freely in sunlight. When Joseph suggest that they destroy the stone, Lisa Lisa explains that its destruction would only make defeating their enemies more difficult. She then decides to have Joseph and Caesar face Loggins and Messina respectively in one-on-one battles as their final test. 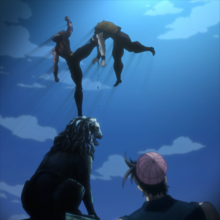 Later that night, as Caesar engages Messina, Joseph walks down the path to the arena where he is to fight Loggins with full intentions of paying him back for the hell he was put through during his training. But Joseph finds Loggins' blooded hat before noticing that the Pillar Man Esidisi is standing in front of him, having already killed Loggins and now turning his attention toward Joseph.