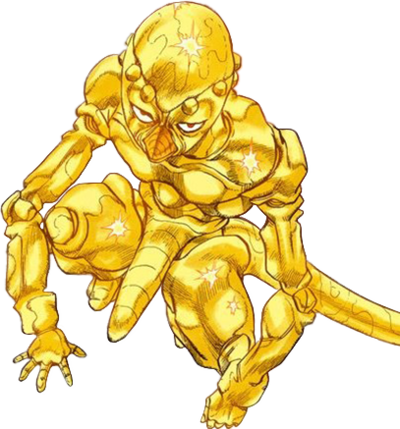 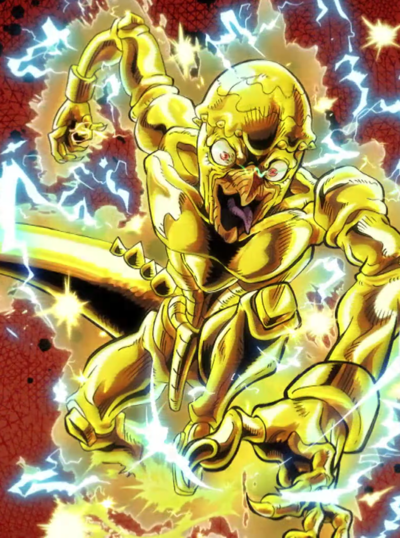 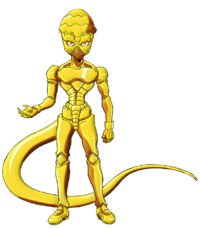 Red Hot Chili Pepper is a Long-Range Stand based on electricity whose lethality increases dramatically when it is near electricity. Not only does its range and ability to pass through electrical systems make Otoishi impossible to find, when powered-up, it can physically overwhelm and outpace Crazy Diamond.[5][6] On the other hand, it is very dependent on its power source to act.

Red Hot Chili Pepper is capable of absorbing electricity to increase its raw strength and speed[7] and heal its wounds.[8] It is shown that it can absorb the full power of Morioh's electrical grid.[6]

Upon depleting the electricity it has absorbed, it will weaken and take upon a rusted look instead of its shiny gold coat and slowly begins to vanish, threatening Otoishi's life.[8][9]

Red Hot Chili Pepper can persist inside and pass through flows of electricity, and thus is able to hide inside power wires[10] or batteries[11] and quickly travel from one position to another through electrical cables. If Red Hot Chili Pepper holds on to an object, it can turn it into electricity and move it where it desires[10] and if this move is used on a living person, they are also dragged inside the electrical system, electrocuted, and eventually killed, as was the case with Keicho Nijimura.[10] Otoishi uses this ability to steal about 5 billion yen worth of goods throughout Morioh,[12] but also spy on his enemies.[7]

Araki states that Red Hot Chili Pepper's design is inspired by the headbutting dinosaur featured in Kyouryuu Daikikou, and its incredible power despite its miniature stature is inspired by Freeza from Dragon Ball Z.[13]