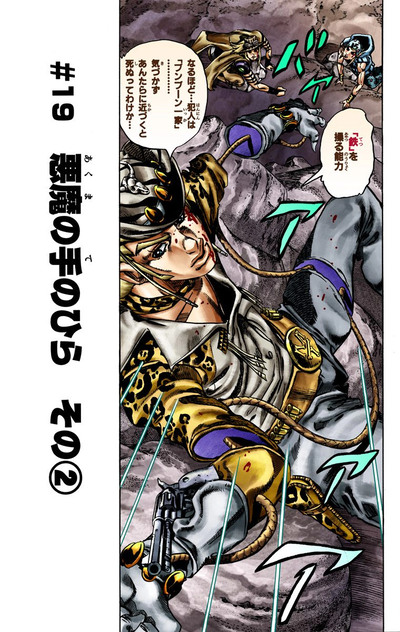 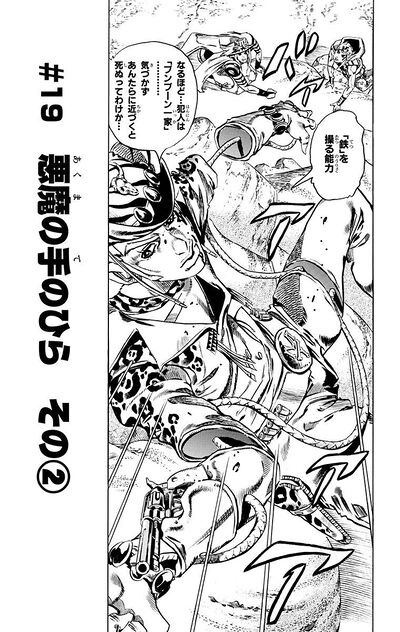 Having been explained that the culprits are the Boomboom Family and that they have a strange magnetism power, Tim explains that there is a strange place named the Devil's Palm which granted Tim his own power named Stand, and that the Boomboom family have probably been here too. Tim then tries to get away from the duo, but L.A.'s Tomb of the Boom 3 ties everyone up with iron sand. Johnny tries to shoot L.A. but Benjamin's own Tomb of the Boom 1 deviates the bullets. L.A. cuts Tim's rope and the cowboy is dragged toward Gyro and Johnny. A lead bullet falls toward Johnny and Gyro urges him to use the Spin on it, calling it Lesson 3. Johnny manages to spin it properly but Benjamin stamps Johnny's hand on the ground. Johnny is desperate but sees that his nails have been imbued with the Spin, with enough force to cut Benjamin in two from a distance.

Author's Note
“
It's apparently out of stock at the bookstore, but I'm just too embarrassed to ask if they have a book on Guts Ishimatsu.
”
—Hirohiko Araki
“
本屋で品切れらしいんだけど「ガッツ伝説って本ありますか？」って恥ずかしくて聞けない。
”
—Hirohiko Araki