The Wind, the Chariot, and Wamuu, Part 9 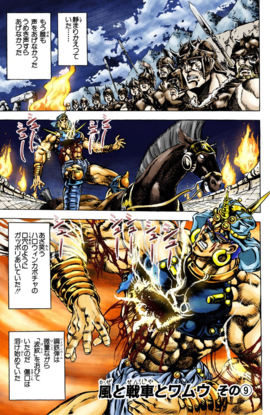 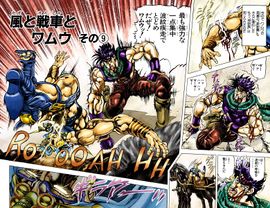 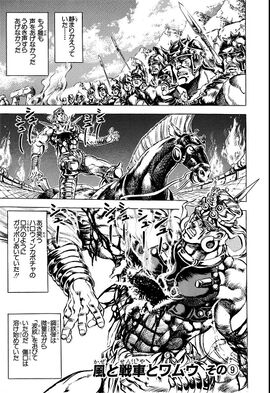 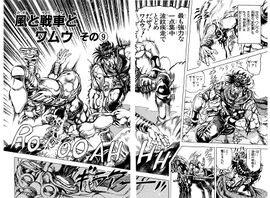 Kaze to Sensha to Wamū Sono 9

The Wind, the Chariot, and Wamuu, Part 9 (風と戦車とワムウ その⑨, Kaze to Sensha to Wamū Sono 9), originally The Final Mode of the Wind (風の, Kaze no Fainaru Mōdo) in the WSJ release, is the fifty-ninth chapter of Battle Tendency and the one hundred third chapter of the JoJo's Bizarre Adventure manga.

With the Ripple flowing throughout his arms and torso, Wamuu is no longer capable of using the Divine Sandstorm. Joseph prepares to finish Wamuu with a Ripple Overdrive, but Wamuu kicks at Joseph. Joseph, predicting this desperate attack, dodges and strikes Wamuu's legs with the Overdrive, rendering Wamuu immobile. But Wamuu will not lose without a fight. By absorbing his arms into his torso, Wamuu launches them at Joseph. The hands pin him by the neck into the arena's wall, preventing him from using the Ripple. Wamuu then uses his Final Wind Mode: Atmospheric Rift, a devastating "wind razor" created from sucked in air and released from Wamuu's lungs.

To defeat him, Joseph lights a bottle of oil on fire and throws it at Wamuu. The fire, if sucked into Wamuu's highly pressurized lungs, will cause the warrior to implode. However, Wamuu senses the bomb approaching and cuts it in half. Joseph then throws Caesar's headband, now lit on fire, at Wamuu, but Wamuu destroys it with ease. However, this was all part of Joseph's plan, and the oil from the broken bottle had been sucked up by Wamuu, along with the still lit pieces of Caesar's headband which causes the high pressured air inside Wamuu to detonate. The proud and brilliant warrior, while a genius in battle, stood no chance against the invincible duo of Joseph Joestar and Caesar Zeppeli.